Porter Kirkwood has been chest-pounding throughout his judicial election campaign about his alleged honesty, integrity, stellar reputation and qualification for Family Court judgeship and "taking the high road" as to the alleged "claims of negativity".

Yet, Delaware County, advised by Kirkwood as a legal advisor, stalled disclosure of contracts that were subject to New York State Comptroller's office, in answer to my Freedom of Information Request.

And here is the likely reason, why - Porter Kirkwood may have been involved in an undisclosed interest in those contracts.

Here are some pieces from the New York State Comptroller's audit report of May 2015 on Delaware County.

The New York State Comptroller's Office made inquiries about possible interests in contracts pursuant to General Municipal Law of 24 individuals, including 19 members of the Board of Supervisors, four Department heads and the County Attorney (that is our judicial candidate Porter Kirkwood).

Apparently, since the Delaware County stalls disclosure about the contracts, I will have to file a FOIL request with the New York State Comptroller's office about the contracts covered by audit, vendor names, inquiries into the "possible interests in contracts" of "24 individuals", including a County Attorney.

The NYS Comptroller's audit report indicates that "one individual", without stating his name, out of 24 individuals that included the County Attorney Porter Kirkwood, did not comply with disclosure requirements of the individual's "potential interest in contracts".

Whether that individual was Porter Kirkwood or not, was not announced.

Porter Kirkwood would have an affirmative duty to come forward to the public and, during his judicial campaign, clearly state that he WAS NOT the individual mentioned in the NYS Comptroller's report who had an interest in the County contracts, but did not comply with disclosure requirements.

He did not make such a disclosure.

Instead, throughout his election campaign, he repeatedly stated that he had nothing to do with the no-bidding contracts - despite the report about the NYS Comptroller's inquiry about HIS "possible interest in contracts".

And now the County still does not have a procurement policy (according to the County's disclosure in answer to my FOIL request) - as was recommended by the NYS Comptroller in its "key recommendations": 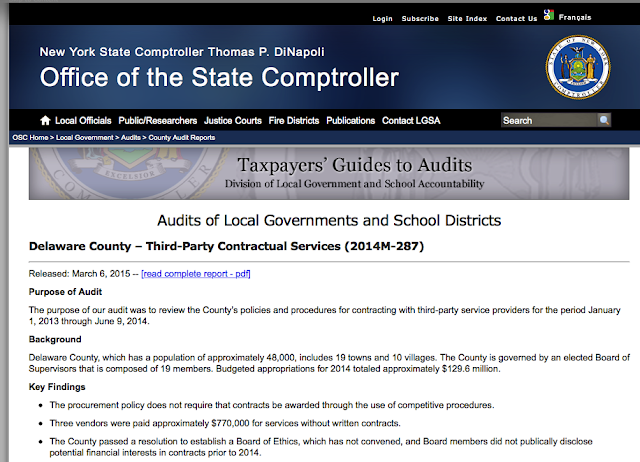 The County reportedly "opted" not to have a Board of Ethics that the County announced in its own earlier resolution it will have.

And, the County, instead of committing ethical questions to a Board of Ethics, a public body whose meetings and decisions would be subject to public meetings law, "opted" to entrust the henhouse to the fox, to the behind-the-doors decision-making of the target of the NYS Comptroller's inquiry into unethical conduct - County Attorney Porter Kirkwood.

Porter Kirkwood's client is Delaware County, a public body supported by our, the taxpayers', money.

Porter Kirkwood owes us the taxpayers and voters an explanation he never gave during his judicial campaign - as to his own self-dealing in the County contracts, and as to covering up self-dealing of county officers and employees.

Instead, Porter Kirkwood claimed "taking the high road", not engaging in "negativity" and denouncing "attacks" on him during his judicial campaign.

While all the time he was stalling disclosure of public records that could provide the voters much needed - and potentially damaging - truth about the true face of Porter Kirkwood The Smiler.

I, of course, will get to the bottom of the names and numbers, through FOIL requests filed in various public agencies.

It will take time, but I will do it.  I owe it to my family who pays the taxes.  I owe it to my neighbors and friends who pay the taxes in Delaware County and do not have my knowledge and skills to pursue FOIL requests - an act presumed to be done in public interests (as courts ruled), and an act for which, nevertheless, I was repeatedly sanctioned and persecuted by the targets of the FOIL inquiries.  People are afraid nowadays to even file a FOIL requests. Even more reason for me to do that, as my public service to my neighbors and friends in Delaware County.

Yet, while I am making my ways through the stallings of government agencies with FOIL requests, Porter Kirkwood may become an elected judge, elected through his fraud and non-disclosure to the voters of his misdeeds, as well as through his efforts to hide his misdeeds by abusing his power as the County Attorney and advisor to the Records Officer of the County and to deny release of records to me pursuant to FOIL requests.

Yet, there are precedents in the State of New York where a judge was taken off the bench based on something he did long before he became a judge - or even a lawyer.

Nor does judgeship protect Porter Kirkwood from criminal liability, if such liability is warranted based on public records that he is concealing from exposure to the public.

So, Porter Kirkwood should rest assured that, even if he gets elected as a judge, and if his "possible" misdeeds with contracts, which are PUBLIC RECORDS, and MUST BE AVAILABLE FOR PUBLIC REVIEW,  are revealed when he is already a judge, there are plenty of legal avenues to address it and make sure he is no longer a judge.

Yet, there is enough impropriety in Kirkwood abusing his power, stalling public access to potentially damaging information, and now appointing himself THE person to address ethical questions in Delaware County instead of a public body subject to public meetings law - to simply NOT elevate Kirkwood into an even higher position of power.

His ethics on that high bench will not get miraculously better.

Absolute judicial immunity for MALICIOUS and CORRUPT acts is what he craves - not service to the people.  And corrupt acts will follow.

Now, let's count unethical acts Porter Kirkwood have so far been caught in:

Voters, when you go to the booths on November 3, 2015, please, think if you need Porter Kirkwood who is a good candidate for disbarment AT THE VERY LEAST, as your Family Court judge who will also be appointed the local Acting Supreme Court justice and, as such, will decide ALL aspects of your life for the next 10 years, with absolute immunity for his MALICIOUS and CORRUPT acts - which acts, judging from his past record, we as taxpayers and voters may be assured, will come.