One more question of public concern - is Otsego County DA a drinker?

I wrote in two previous blogs (here and here) about the outrageous reversal in the People v Michaels case - outrageous because the case was not supposed to ever see the insides of the court, it was legally insufficient to begin with and was never to be brought.

I also wrote on this blog that Judge John Lambert, before coming to the bench, was DA John Muehl's deputy, the Chief Assistant District Attorney of Otsego County.

I appeared in Otsego County court since 1999 when I came into this country - first, accompanying my husband-attorney, and then as an attorney myself.

I remember John Muehl since he became a DA.  I remember his ruddy face with the facial color that I normally saw on my husband's DWI clients.

It was previously reported by a blogger that John Muehl, before he became a DA, left the scene of an accident because he was drunk.  John Muehl, as far as I know, did not sue that person for defamation.

And whether a DA has a drinking problem or not is a BIG issue of public concern.

First, if John Muehl does have a drinking problem, he should not be investigating and/or prosecuting cases because his judgment may be clouded by alcohol.

Second, he has no moral right to prosecute felony DWIs where he himself is absolved from such investigations and prosecutions, being put by his position above the law.

And here is John Muehl's picture, a close-up.  A ruddy blotchy face, blood-shot clouded eyes.  The question is, how can such a man be trusted with prosecutions of people, putting people away for years? 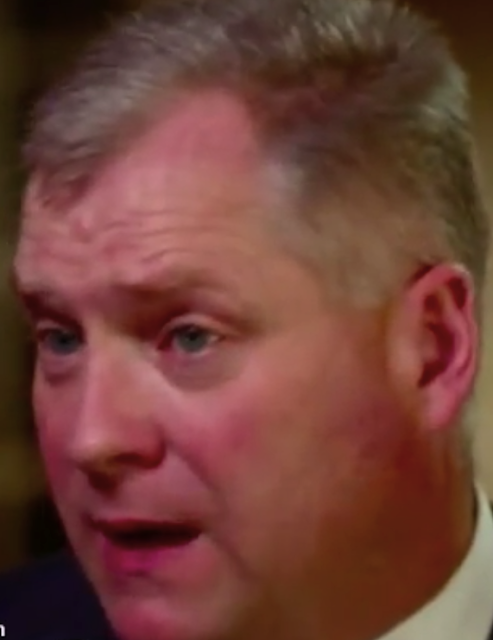 The public has a right to know - does DA Muehl or not have a problem with alcohol?

You know who should be asked about it?

First, he should know from his experience in the DA's office.

Second, Judge Lambert regularly sits in close proximity to DA Muehl during the back-room court conferences.  It is a closed space.  He must be able to see - and, possibly, smell - alcohol.

If he knew as an attorney and did not report DA Muehl's drinking - that's attorney misconduct.

If he knows as a judge and does not report DA Muehl's drinking - that's judicial misconduct.

And third, an investigation of John Muehl's possible drinking habit can be easily done based on review of his purchasing history.  I doubt that, if he has a drinking problem, he always pays for his drinks in cash.  There should be tracks.  There should be witnesses, abundance of witnesses.

But a public authority with a power to investigate the powerful DA should do that.  Because, otherwise, he will lash against citizen investigators as stalkers.

So, will authorities in New York finally take their heads out of where they are and investigate John Muehl?