I have written a lot about judicial misconduct in the State of Georgia, and dedicated several posts to the outrageous situation when, in order to cover up the use of racist language by a white male judge, a white female judge engaged in a campaign of persecution of a journalist, Mark Thomason, and his attorney, Russel Stookey, had her former law clerk (and now District Attorney) Alison Sosebee illegally arrest them, throw them in jail, charge them with felonies - and how these courageous people were able to get out of jail and get their charges dropped (but, as far as I know, not expunged yet) only after an outcry started by a no less courageous journalist, Rhonda Cook.

In fact, upon my information, but for Rhonda Cook, at least one of these two people, had a considerable chance of not surviving the ordeal.

here (with additional links to more blogs within this article) and here.

I also wrote how the State of Georgia appears to target criminal defense attorneys with disciplinary actions for nonsense while allowing attorneys and judges engaged in corruption escape any accountability.

I also wrote how the State of Georgia allows its judges caught in misconduct to escape accountability, run from the bench, get into the legislature, and from there, attempt to squash (oops, "reform") the very body that was supposed, on behalf of the public, to investigate and prosecute judicial misconduct in the state.

As one of the witnesses to this sad story told me characterizing this whole mess with judges "helping out" one another to escape accountability in investigations of corruption - the best way to survive a firing squad is to kill the firing squad, first.

And that's exactly what Judge Brenda Weaver has been doing with the two people who had the audacity to apply for court records and, when told to buzz off, and told, and told, and told again, and threatened, and threatened again, and slapped with a motion for thousands of dollars for attorney fees, and slapped with "judge-friendly media" slander - continued to go on and on in digging more and more and even submitting the entire file to the FBI.

And now, ladies and gentlemen, while our world-renowned "free press" is busy discussing the "flood footwear" and the next faux pas of our President, that same free press, nearly all of it, with few courageous exceptions, turned a completely deaf ear to the BASHING, vicious, cruel bashing of a journalist, who dared to investigate a CORRUPT judge.

Well, the "free press" did not actually turn a completely deaf ear - only a tone deaf ear.

Because, the so-called mass media central press sources DID cover the recent DISMISSAL of complaints (4 of them, including one from a professional association of journalists of the State of Georgia) against Judge Brenda Weaver, saying that:


1. after investigation and talking to ONE witness (Judge Weaver's former law clerk, Judge Weaver's husband's former employee and the prosecutor in the case who signed the arrest warrant Alison Sosebee), the investigation took what Sosebee told them at face value and dismissed the case for "lack of evidence" and as being "without merit";

2. the Judicial Qualification Commission is satisfied that Judge Weaver did not influence prosecutor Sosebee in any way in the investigation and prosecution of Mark Thomason and Attorney Russell Sosebee;

3. JQC noted that the FBI investigation against Judge Weaver has ended with no charges filed; and then

the Commission bashed - no, not Judge Brenda Weaver for using her considerable power and connections for corrupting, as this series of blogs, based on documentary evidence and witness accounts, will show, EVERYBODY who had any role at all in this investigation.  No, the JQC bashed the VICTIMS of Judge Brenda Weaver, 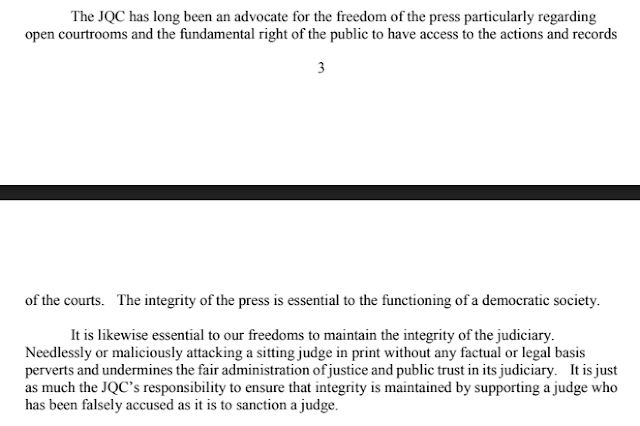 Since such words in such documents under such circumstances are only too familiar to me, as an investigative reporter on judicial corruption of many years, and constitute a "go-ahead" to other authorities to further prosecute Thomason and Stookey in any possible manner they can invent, contrive or fabricate, and

since the Judicial Qualifications Commission preferred to blatantly LIE to the public that there was no evidence of misconduct of Judge Brenda Weaver when it had TONS of such documentary evidence presented to it, I will start to PUBLISH that evidence -

so that the public would see for itself what exactly Brenda Weaver is and how exactly she "cleared her name", as the "mainstream" "free press" so readily agreed, without doing its job and using their considerable resources to do a proper journalistic investigation, see:

See also reports SAVORING the bashing of the victims of judicial corruption, SAVORING that the Judicial Qualifications Commission, which was RIDDEN (as the later blogs will show) with conflicts of interest - "lambasted" the journalist and his attorney for exercising their right to get access to open court records, and be slapped with a defamation lawsuit for their efforts, as well as jailed, starved, charged with felonies, harassed and intimidated.

It all boiled down, in the eyes of the Commission - as reported by the "free press", to Thomason's and Stookey's "personal dislike" of the judge.

There was actually a very courageous article by a local journalist Bill Torpy questioning whether the Judicial Qualification Commission suddenly turned into a judicial lapdog.

After reading these publications and the documents I am planning to publish, you be the judge of that.

My later blogs will show how much of "personal dislike" every honest member of the public in the State of Georgia should have to this corrupt woman.

Let me give you a tiny sneak preview of her "unofficial biography" to come and tell you that:

And that is only a tiny crown of the iceberg of evidence that the JQC - in this composition and with THIS amount and depth of conflicts of interest - would not like to look at and preferred to ignore.

For publication of the ugly story, in a series of blog articles, of how Judge Brenda Weaver