If access to legal remedies is thwarted, there should be no surprises that alternative valves to find those LEGAL remedies are sought

Over the course of my law practice as a criminal defense, Family Court, Supreme Court and civil rights attorney, over my history as a blogger, I have been talking to many people, clients, friends, neighbors, readers of my blog, about the essential goals and purposes of the court system - and whether those purposes and goals are fulfilled in the United States.

The goal of any court system is to set conflict resolution in a society in an orderly fashion, thus preventing social chaos, unrest and private vendettas.

When the court system does not fulfil those functions and, in and of itself, starts to spread injustice and personal vendettas of the administrators and insiders of the system against non-insiders, the natural thing occurs, the natural thing being appearance of alternative ways for people to seek legal remedies.

That is done by speaking out in public forums - with the hope that the public becomes aware of the issues, that exposure of perpetrators of abuse of public office will be brought to justice or at least shamed into changing their ways.

Yet, I will remind my readers that in the United States and in every state of the United States the sovereign is We the People, by the state and federal Constitution and by our Declaration of Independence, and this collective sovereign may rule either through its representatives (the government) or directly.

By the way, we have a U.S. Supreme Court case stating that directly in no uncertain words, putting the direct exercise of sovereign power actually ahead of exercising it through a government representative.

I took this quote, actually, from the filing of a common law grand jury in the U.S. District Court for the Northern District of New York.  They did pretty legal good research of the subject matter.

Yet, when people who become desperate to fight the impenetrable wall of injustice created by the "justice" system, start participating in such alternative-court programs, exercising their rights to directly govern as a popular sovereign, they are:

1) targeted as "domestic terrorists" - see my blog about it here and here;

2) criminally charged, convicted and sentenced for fraud and "simulating legal process" as it just happened in Texas;

3) mocked as "nuts",  and their pleadings as "comic" - see even such a respectable legal blog as Jonathan Turley's blog to sink as low as calling the actions of the Texas woman "comic" pleadings; and

4) blocked from access to court, as the candidate to become new Chief Judge of the State of New  York Gail Prudenti did - without any authority - in blocking court filings of a movement called "the common law grand juries", and blocking access to court only aggravates the problem, not resolves it. 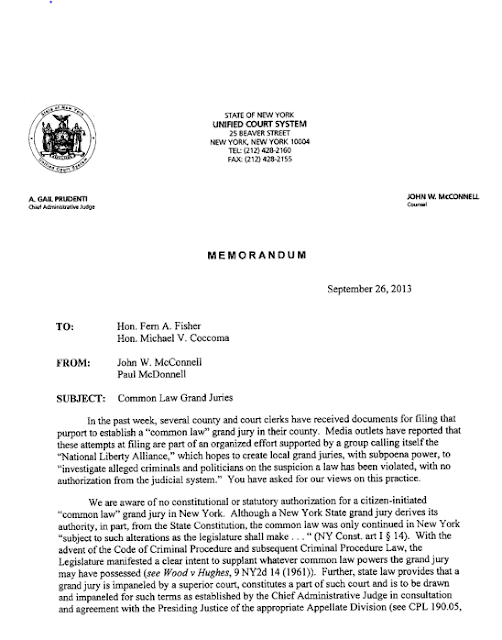 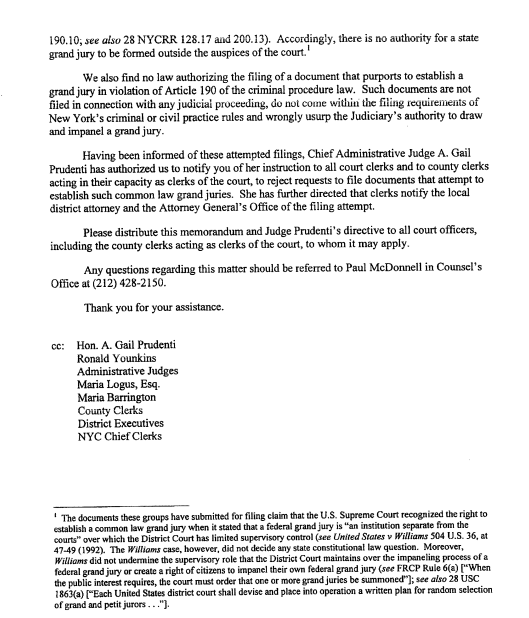 Prudent claimed that "there is no authority for a grand jury to be formed outside of the auspices of the court".

Yet, the law clearly says otherwise.  Here is an excerpt from a federal filing by the same entity. 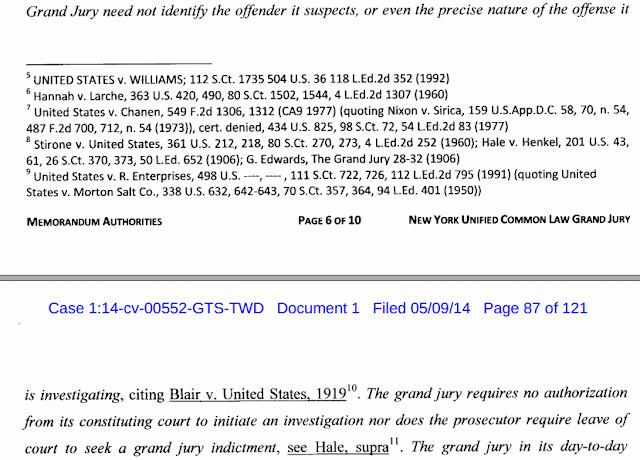 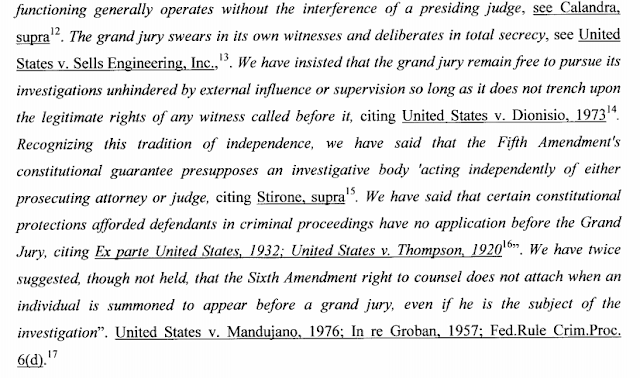 See also the decision of the Greene County Supreme Court on the issue of New York Common Law grand jury (from a federal filing). 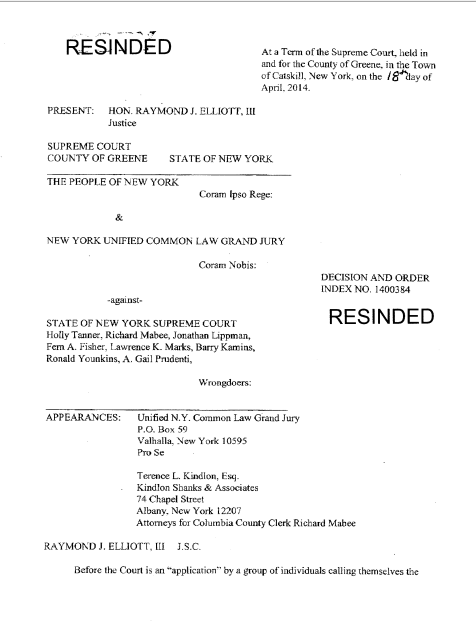 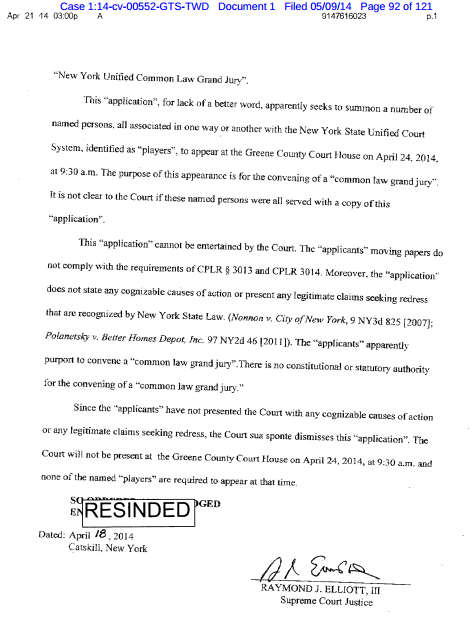 In the above decision the court:

1) mocked the common law grand jury's filings by calling it an application in quotes;
2) claimed that the application could not be entertained for the only reason that:
a) it did not comply with CPLR 3013 and CPLR 3014; and
b) did not state a "cognizable cause of action".

Yet, the filing was not for a civil lawsuit, but was a summons to a criminal grand jury, so no "cause of action" needed to be stated there.

Now, despite the accusations that these organizations are terrorists, criminals and nuts, all they are doing is asserting their rights found in the laws of this country.

Thus, the honest way of dealing with them is to oppose their arguments not with blunt force of the government,

Because what these people are doing, is protected by laws of this country, including the 1st Amendment - freedom of speech and access to court - and by the due process and equal protection clauses of the 14th Amendment to the U.S. Constitution.

Not only ideas should be fought with ideas, not blunt oppressive force by the government - that is what the 1st Amendment is about, at its core, but the government demonstrates the weakness of its position and the possibility that these alternative court movements are right in their ideas and arguments.

When you punch your opponent instead of putting an argument in opposition of his argument, that means, you do not have good arguments.

Usually, innovation is first met with mockery, if not outright hostility.

The usual initial reaction of society to innovation is hostility and rejection.

Think about replacement of horses with automobiles or, God forbid, planes.

The legend of the Icarus shows what people thought of such innovators - they were impractical dreamers at best, dangerous nuts at worst.

The same applies to social innovation.

What was a dangerous idea (like allowing women to vote, or to have control over their own property or destiny, to choose their husbands freely - or not to choose them at all) now is completely mainstream.

What was a crime of homosexual sex just 15 years ago, think about it, 15 years ago, is now not only legitimate, but a same sex marriage has been proclaimed a constitutional right.

Social progress will not be possible without some initial trailblaizer expressing an idea that initially appears as "comic" or "nutty" or "dangerous", or even terrorist to the mainstream government.

Yet, the 1st Amendment was introduced and exists BECAUSE of the prior similar abuses by the sovereign that had an absolute power - the King.

The 1st Amendment prohibits ANY infringement by the government on freedom of political expression.

Let's remember that - if our judges wouldn't.

What the "alternative court" movements are doing is, very simply, political activity aimed at drawing public attention at imperfections (that is an understatement of the century) of the American court system that turned into a place that strips people of their right to legal remedies instead of giving those remedies to the people, as was the initial goal.

Courts, judges, lawmakers and law enforcers, should really open their minds and just LISTEN to what people in the "sovereign" or "common law jury" movement have to say.

If they do, very possibly, a constructive solution will be found.

Public servant should talk to the members of the popular sovereign.

It is a very simple idea.

Truth can be found in a discussion and in exchange of ideas, not in throwing punches.

If our court systems prefer to throw punches to giving people an opportunity to be heard, and if insiders of the court system position themselves about the law (as they do through the court-created concept of absolute judicial immunity for malicious and corrupt acts on the bench) and operate to engage in every trick in the book, no matter how illegal, to abuse their power and to deny people legal remedies, there should be no surprises that the steam of dissatisfaction will seek alternative relief valves.

I do hope that the sentence for the woman in Texas is overturned on 1st Amendment grounds.  It should be.

And I do hope that federal courts will finally review, on the merits, the ideas expressed by those movements, I do hope that the courts stop hiding behind their vast oppressive machine and just honestly do their jobs for the people, providing to them legal remedies they are entitled to.

We do not need anything more than that from our court system.

But we are right to be upset  and to seek legal alternatives, through constitutionally protected activities, when the court system, or any other branch of the government, fails to fulfil their designated goal.