Do not criticize Cuomo during the pandemic!

Governor Cuomo has started to show frustration with "irrational outbursts" of "some individuals" who, as a result of "cabin fever", are attacking the flawless performance of public officials and "undermining public tranquility".

After all, what is there to criticize about Cuomo's performance as a public official?

Disbanding the public corruption (Moreland) commission when it started to investigate his surroundings.

Giving lush jobs to his criminal friends who have saved his sorry ass from a public corruption investigation (Exhibit 1 - Chief NYS Judge DiFiore and her hubby awarded a seat on cushy Gaming Commission).

Giving himself a 40% raise during the pandemic, budget crisis and economic disaster for individual New Yorkers and small & medium-sized businesses. Suffocating the upstate seniors because billionaires in NYC need their vents.

Indeed, what is there to criticize. 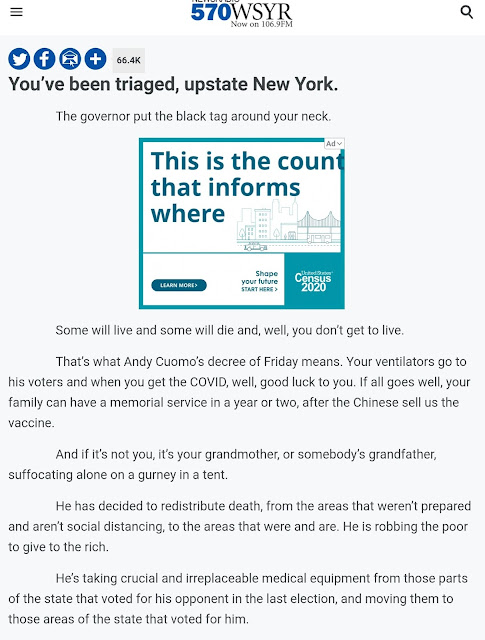 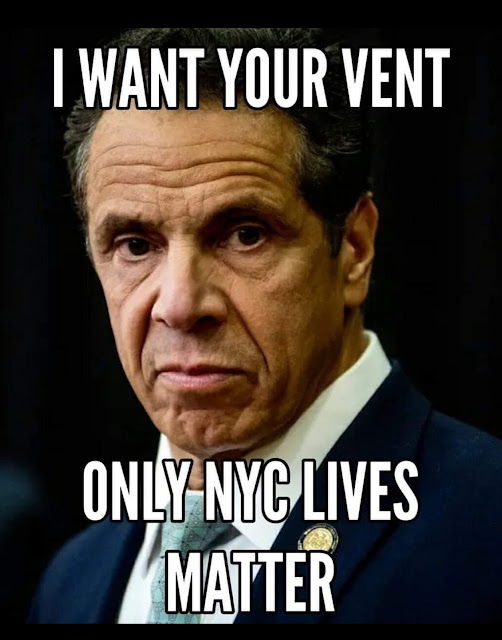 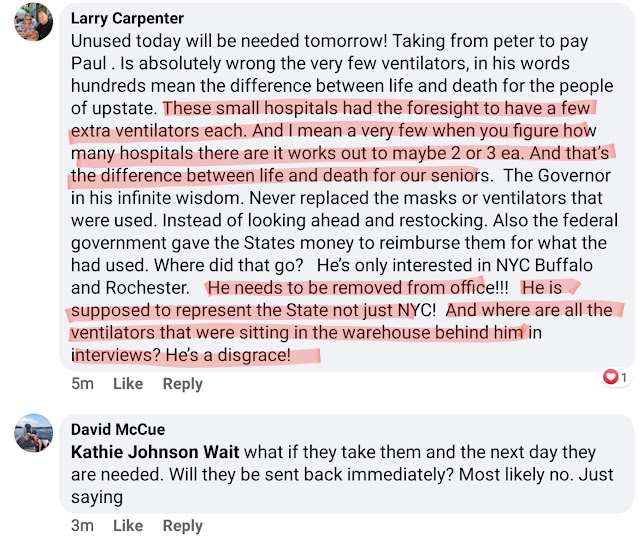 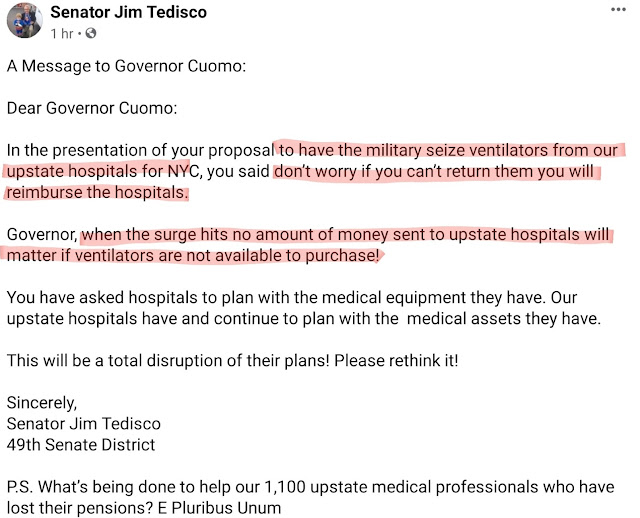 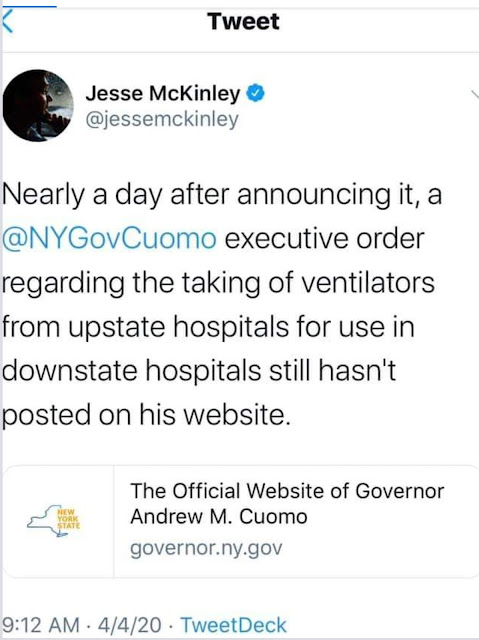 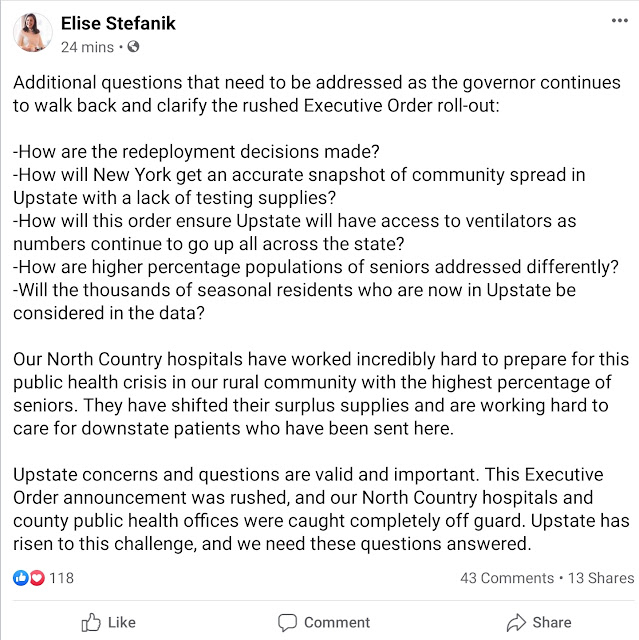 Senator Stefanik is "cabin-feverish" to the point of starting online petitions against the executive order "to share". 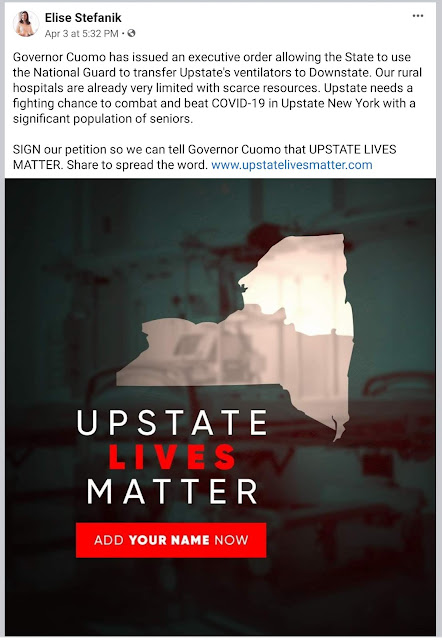 So, after all of this "cabin-fever" irrational activity of legislators undermining Cuomo's efforts in maintaining public tranquility he has finally addressed the issue of seizure by National Guard of ventilators from the upstate for NYC at the press-conference.

In the only way he knows how.

He is a l(iar)awyer, remember?

He has been taught how to maintain a certain legal position without regard to its truth or falsity.

1. He said that 0 vents were seized from upstate, while

2. In comments, people report that vents were sanitized and turned over to the National Guard pursuant to his (kind sharing) eugenic seize-order. 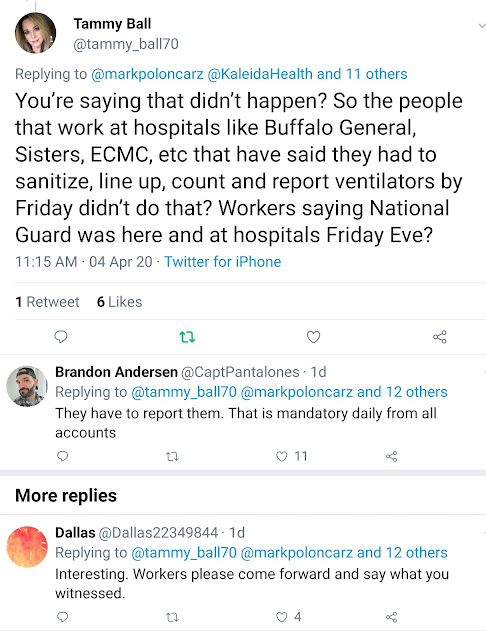 Now, Andrew Cuomo as a liar? 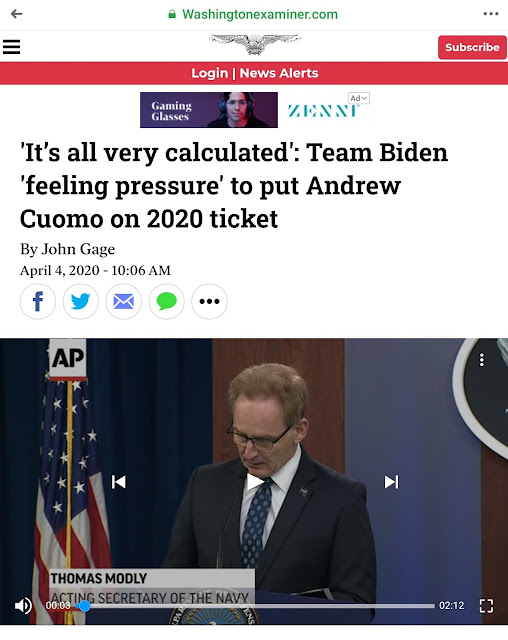 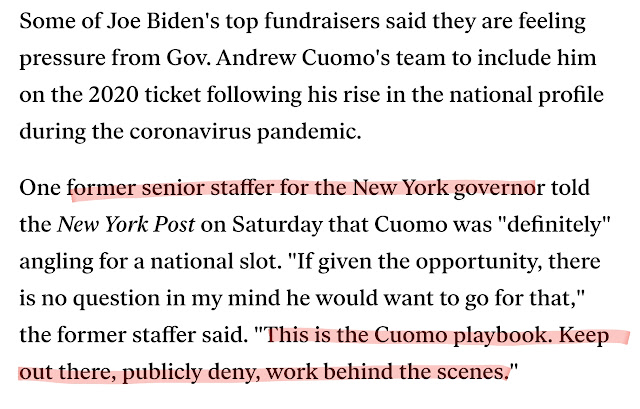 And, an interesting question asked by a New Yorker re reports by Cuomo that upstate NY does not have a surge of CV cases.

Probably, another case of irrational carbon fever to ask such questions, don't you think?

Yet, I have reports from people who were denied testing in upstate NY while having symptoms - and I don't know whether that was for

Because Cuomo's voting base is there.

And, a wholly different amount of financial support is needed to put duce Cuomo into the White House to be the de facto President over the obviously demented and declining Biden.

And, people with, supposedly, a cabin fever, ask questions like this

Which, after having lived and worked in the NY legal community for 16 years, I would consider quite a legitimate question.

And questions like this - what was the Governor doing at a secret posh fundraiser on March14, 2020?  Was preparing for the pandemic?  Discussing production of ventilators that today he lamented requires more than 2 weeks, logistically,  to produce?

He had those 2 weeks then.

How many lives could have been saved from a horrible death by suffocation had duce Cuomo been doing his job,  not just lining his own and his friends' pockets?

Many watchers of his press-conference from outside NY said - "we envy you, New Yorkers", "such an intelligent man", "Cuomo first President".

1. New Yorkers would let other states borrow Andy and will pay them to keep him, knowing his true history and essence,

No more l(ia)awyers for President, especially corrupt ones.
Posted by Tatiana Neroni at 9:15 AM No comments: