Recently, the NYS Statewide Commission for Attorney Discipline where the judicial nominee Christine Ryba is a member, issued a Final Report where there was no trace of the problem of selective enforcement (or, rather, non-enforcement) of attorney discipline against politically connected attorneys, and no trace of concern about corruption within the court system.

I already wrote about the reasons for such stark omissions - despite public testimony in the three "public" hearings about such corruption and selective non enforcement.

The reason is simple - because members of the Commission were those who actually participate in such corruption and selective non-enforcement.

Christine Ryba is a good example of unethical behavior that is occurring under the very nose of the Chief Judge of Appellate Division 3rd Department which disciplines, to the point of disbarment, civil rights attorneys, but allowed Christine Ryba to use court computers to pressure court employees to make contributions to her campaign.

I am not familiar with names of court clerks across the State of New York, so I will have to take some time and use this tip, comparing the names on Christine Ryba's financial filings with the New York State Board of Elections with available databases of court employees to see the matches.

I will report as to the matches on this blog.

Chrstine Ryba was also reported to have misrepresented her status in her election campaign - initially, before she was caught - as being already "of New York Supreme Court", instead of being a mere nominee for New York State Supreme Court.

Here are the "before" and "after" screenshots off of Christine Ryba's Facebook campaign page. 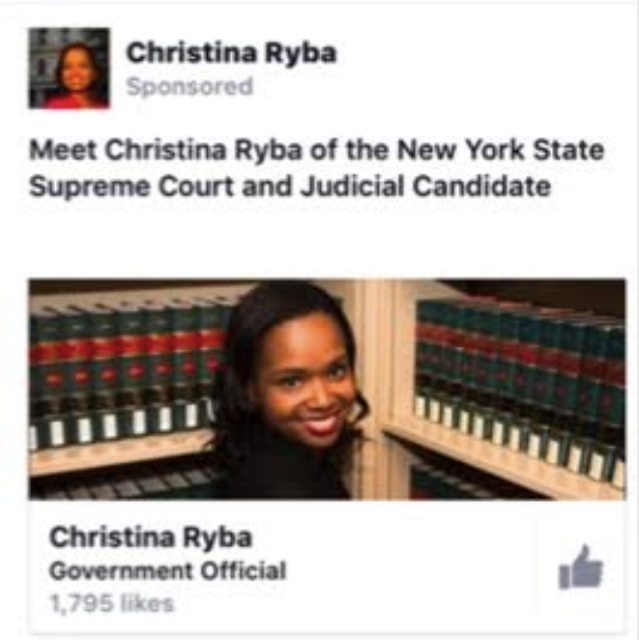 The 1,795 "likes" on the screen above are at least 1,795 defrauded potential voters - and this fraud is irreversible. 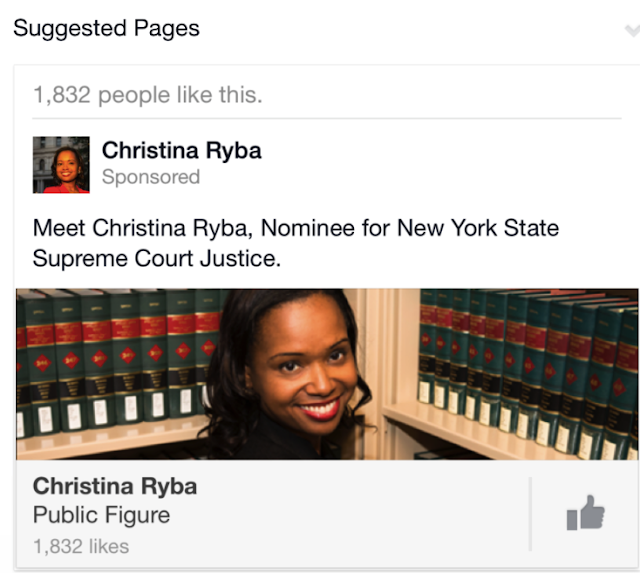 Christine Ryba also reported in her 30-second video clip that she "recommends and drafts" judicial decisions for the 3rd Department court.

Watch how confidently Ryba tells her voters that she, in fact, does what she has no authority to do ("recommend" decisions), that she, in fact, influences decisions of the New York State Supreme Court, Appellate Division 3rd Judicial Department, a court which for most litigants is the first and last appellate destination, because the NYS Court of Appeals is a court of extremely limited jurisdiction, and there is no right of appellate review "as of right" in the U.S. Supreme Court, not to mention that every new appellate step, on top of its uncertainty, is prohibitively expensive.

If she could exert improper influence upon judges of the Appellate Division before her ascension to the bench, she will retain those connections after she takes the bench, and if she could not be deterred by attorney ethics from influencing judges before she came to the bench, for the sake of her career advancement, think what she can do to prevent reversal of her decisions when she comes to the bench.


In her video clip, in addition to boasting that she "recommends and drafts" decisions of Appellate Division 3rd Department, she claims superior trial experience.

Here is an anonymous comment from the blog featuring her unethical conduct in her election campaign, and they are anonymous for fear of retribution and for real fear of losing law licenses - and from the office that is the legal representative of the 3rd Department AND Cristine Ryba, the New York State Attorney General's office:

So, a colleague of hers who is fearing for his or her livelihood to show his or her name, does not have such a superior opinion of her alleged trial experience, and Ryba did not present a list of cases in her campaign where she would be the 1st chair, so the comment may very well be true.

I think so, too.  If Ryba is behaving this way in her election campaign, just think what she will do on the bench.

And the naive me, an appellate attorney in that court, was hoping, same as my clients do, that it is the judges elected to the Supreme Court and then appointed by the New York State Governor to the Appellate Division that make the decision.

Now I will have to make motions to vacate all decisions made by that court as having been influenced by a non-judge - according to Christine Ryba's video confession to the voters.

Christine Ryba was also quite recently criticized in the press for violating rules of ethics for judicial candidates by not-so-subtly stating in her campaign that a judge of town court handling traffic tickets (which is not the only thing that a town justice do, where a town justice also handles felony arraignments, felony hearings and a full scope of misdemeanor procedure, from arraignment to jury trials - as well as a variety of civil cases) is not sufficiently qualified for the high position of a Supreme Court justice.

People wrote unnamed letters about Christine Ryba's solicitation of funds for her campaign from court employees through the use of court e-mails for fear of retribution from the "ethical" Ryba and her "benefactor" judge Karen Peters.

Here is the letter that was initially reported on this blog - also by an anonymous blogger. 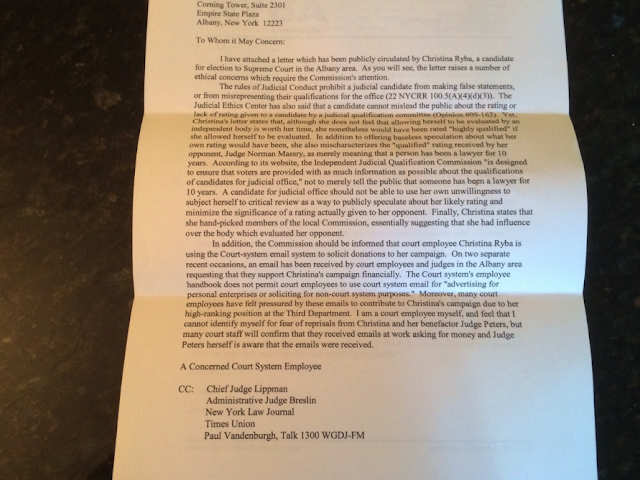 Here is a screenshot from Ryba's Facebook campaign page I took today where Ryba is boasting of endorsements from two bar associations: 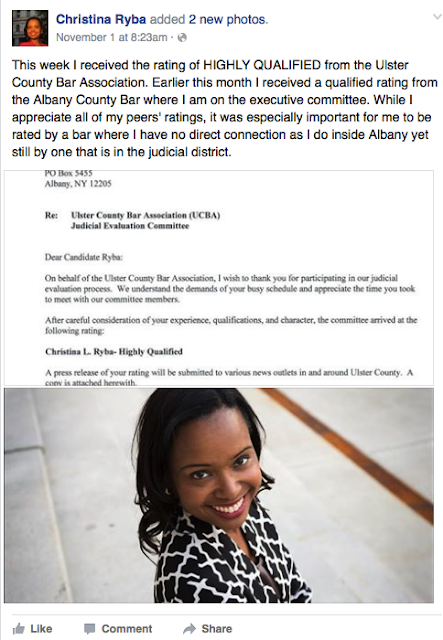 And she lied not once, but twice, with an hour's interval, deliberately. 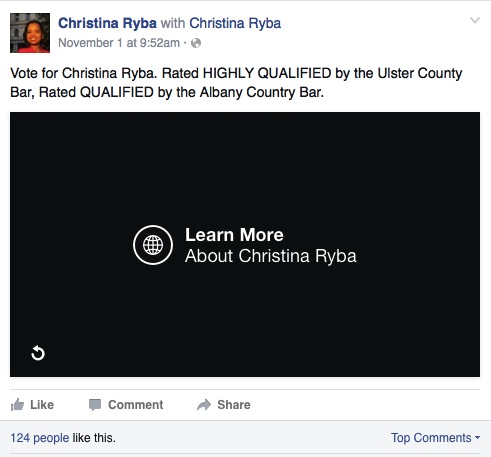 What kind of judge she is going to be if for her, the main thing is not to be caught?

And, her reprehensible (although, very likely, true) claim that she had the power to influence the appellate court by "recommending" and "drafting" the court's decisions means that it is Ryba who recommended suspension and disbarment of other attorneys for allegedly unethical behavior!  While considering herself untouchable because of her proximity to and influence upon the Chief Judge.

Reba already posted her "acceptance speech" thanking everybody who she defrauded into voting for her: 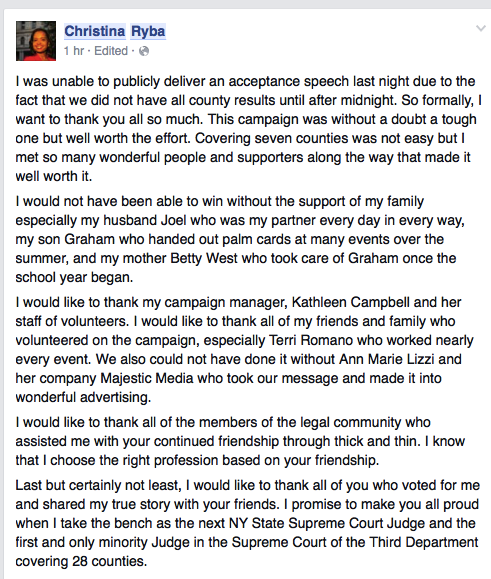 Now that she successfully defrauded voters, I suggest that petitions should be filed with the NYS Board of Elections and with the State Supreme Court in the district where Ryba is elected to void her elections based on fraud.

I also suggest that New York State Attorney General should take his head out of the sand and finally stand up for the People of the State of New York who elected him to protect them from fraud, even and especially when it comes from public officials - and to oust Ryba if she is elected (and she is leading in the race right now, according to reports) based on a write of quo warranto, as a usurper-through-fraud of a high public office of a Supreme Court judge.

I suggest that NYS AG looks in the direction of the trial now occurring against Sheldon Silver and that will soon occur against Dean Skelos.

It was NYS Attorney General's job to protect the public from fraud in the government.

He did not do his job and allowed fraud to thrive for years and decades, hurting people and costing them millions of dollars in public funds.

It is time to start doing his job.

I believe, Ryba's behavior in her election campaign warrants ousting her from the bench she grabbed through fraud, and it also warrants her disbarment.