Mama, I want a puppy for Christmas - but, Johnny, Daddy did not earn that much this year...

I have watched today the live-streamed public hearing in front of the NYS Commission for Legislative, Executive and Judiciary pay.

The hearing took several hours, it is a lot of testimony to digest.  I have a copy of the video testimony.  I will digest the testimony and written submissions and will post a series of blogs reporting on the hearing.

I was taking notes during the hearing, I will make my own transcription of the testimony and will share portions of those transcriptions with my readers.

One thing I did not hear today from any of the numerous advocates for the judicial pay raise is an economical analysis of budgetary situation in New York and a substantiation whether New Yorkers can afford the pay raises that judges claimed they are entitled to.

Yet, a report about economic ranking of the State of New York as opposed to other states of the United States exists, and here it is.

Based on that report, New York ranks 46th out of 51 state in budgetary health/solvency, which matches with the 47th place in the level of judicial pay (according to the today's testimony of the chief counsel for Estee Lauder at the NYS Commission for Judicial, Executive and Legislative pay raise).

Yet, judges ask for "parity" (in pay only) with states that are ranking much higher than New York in budgetary issues.

Here are some snapshots from a recent report on budgetary ranking across U.S. states.

New York has a debt of $17 dollars per EVERY resident - including babies, nursing home residents, prisoners and people who earn well below poverty levels.

At the very same time, judges claim "personal hardship" - when their current salaries are 3 times (!) higher than the average salary of New York taxpayers who fund them. 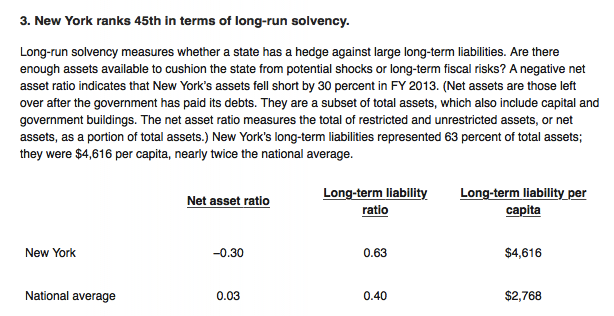 The long-term liability per EVERY New Yorker, once again, including, babies, retirees, prisoners and people earning under the poverty level, is a staggering $4,616.

So, a family of 4 people (two parents and two young children) are already saddled, on top of property taxes and annual income taxes, with $18,464 in DEFICIT generated by the government.

The key phrase here is that "New York relied heavily on neonate sources to cover spending".  The non-tax sources is debt.  Debt New Yorkers are going to be saddled with well into the future.

Under these conditions, businesses usually FREEZE or CUT wages of their workers, in order to survive.

Not so with New York court judges.

Under the conditions were economy is crumbling, they want an INCREASE of their already inflated salary which is already more than 3 times higher than an average salary of struggling New York taxpayers. 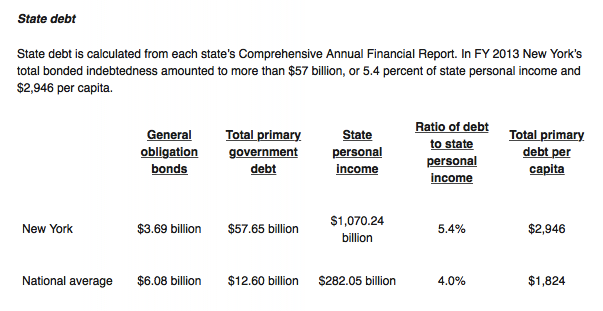 Key words here is that 5.4% of "state personal income" and $2,946 per capita is "total bonded indebtedness" in New York State.

The key words here that New York has UNFUNDED PENSION LIABILITY of $251 BILLION, 8.4 TIMES more than the reported unfunded $30 billion.

Any judicial pay raises will only add to that already staggering unfunded mandate.

Preliminary conclusions - there were no surprises.

There was a lot of brown-nosing by attorneys and bar associations
who described "personal hardships" of poor dear (very dear)
judges who "only" draw a paycheck of $174,000 a year, which is
3.5 times more than the income of an average New York taxpayer
who foots their salary and benefits, and their ability to do nothing
with the help of their similarly overpaid law clerks, to be
rude, aggressive and play Gods in the courtroom.

I will probably have to dedicate a separate post per each
brown-nosing speaker to show the depth of moral degradation that
the New York legal establishment has sunk into.

There was a lot of self-glorifying flowery statements by judges and
judicial associations, no surprises there.  They want more money,
they want it now, and they claim - about themselves -
that they are the best, the brightest and the most impartial.

I told you earlier today it was going to be a stand-up comedy - and
it was.

There was a lot of mentioning of the Constitution
by the judges and the brown-nosing attorneys (which judges
exclusively use in connection with pay raises, but give themselves
a gift of absolute immunity to violate otherwise).

It is obviously safe to mention the Constitution in the setting
asking for judicial pay raises.

When you mention the Constitution in a motion to recuse
or in a civil rights case - you and your client get monetary
sanctions and you lose your law license,
so the use of the word "constitution" and "constitutional" today
by attorneys advocating judicial pay raises was sort of an
elaborate hedging technique, a survival-of-the-fittest (brown-nosers)
skill.

After all, I already stated earlier in this blog that the most
treasured skill a lawyer can have is to know how to praise
the presiding judge better.

There were several witnesses today who testified about
judicial corruption and about the necessity to tie judicial pay
to integrity, competence, fulfillment of constitutional duties,
generally, to performance.

There was a witness who publicly announced that the federal
government is stepping in and planning to remove several
1st Department judges in 2016 and file indictments against them,
and the only reason why criminal charges will be confined
to 1st Department judges only is that the organization that
spearheaded investigation and surveillance of judges
is located in the 1st Department and lacks fund for other
departments.

There was a judge from the 2nd Department lamenting the
loss of talent, where judges were leaving judicial positions for
a better pay in the private sector.

One of such "lost talents"  is 2nd Department recently retired
judge Peter Skelos, brother of NYS Senate Majority leader
Dean Skelos (recently resigned) who is currently tried by
the feds for corruption.

You can read my blogs about that particular legal "talent",
Peter Skelos, by running his name in the "search" window
on this blog and here.

What is also very interesting is that, even though the Commission
was to deal with pay raises in all three branches of New York State
Government, witnesses testified only about one branch -
judges.

There are also some curious points at the hearing.

The only time when the microphone during live-streaming failed
was during the testimony of the first opponent of judicial pay
raises.  Consequently, listeners of the "live-streamed" video
could not hear a chunk of an opponent's testimony.

Microphones worked fine for the testimony of supporters
of judicial pay raises before and after lunch.

The only witnesses at whom two members of the Commission
openly yelled at were two opponents of judicial pay raises.

Both yelled-at opponents were females.

Both yelled-at opponents wanted more time to provide details
to the Commission and were denied despite the fact that the
public present at the hearing asked to give them more time.

One of the yelled-at opponents donated 2 minutes of her time
to another, and was yelled-at by two panelists afterwards
during her own testimony.

A panelist yelled at the public for advocating too loudly
in favor of giving more time to the second yelled-at female
opponent of judicial pay (the last witness).

There were only three witnesses testifying after lunch,
the hearing was concluded before 3 pm and there was no reason
why more time was not given to witnesses to allow them to
fully relay details of what they wanted to say to the Commission
and to the public.

All of what I described was documented.  I will post
the clips with comments.