In July of 2015 there was a public hearing in Albany before the Statewide Commission for Attorney Discipline.  The transcript of the hearing was recently posted by the Commission.

At that hearing, Monica Duffy, Chief Counsel of the Professional Conduct Committee, took offense at the testimony of a witness about failure of attorney disciplinary committees across the State of New York to prosecute criminal prosecutors who commit misconduct.

Yet, it is undeniable that such non-enforcement happens - because none of prosecutors who were involved in wrongful convictions in New York were disciplined.

Yet, Monica Duffy made the following speech in front of the public and other members of the Commission: 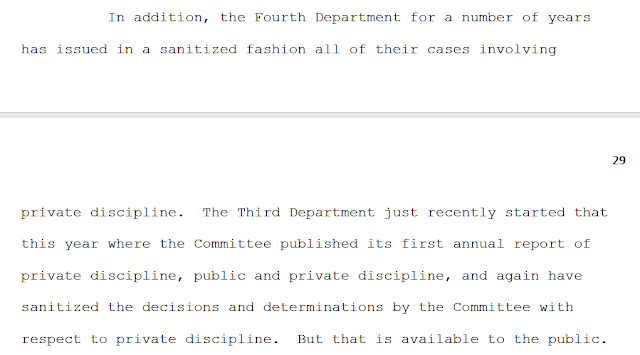 By making these statements pretending that non-prosecution of criminal prosecutors never happens in the Third and Fourth Departments, Monica Duffy committed attorney misconduct, by interfering with administration of justice and by attempting to avoid reform of her own agency - and, possibly, to avoid discipline for not doing her job properly, the job that pays her, out of taxpayers' pockets, $140,508 (that's the annual rate) per year, and somehow Monica Duffy outdid herself by earning more than her annual rate in 2014 - $143,640 according to seethroughny.net.
Because it is, once again, obvious that prosecutors who commit misconduct are not prosecuted - because, according to testimony of the Chairman of It Could Happen to You before the same Commission on the same day, according to his own research of over 3,000 wrongful convictions, no prosecutors involved in those wrongful convictions and whose misconduct caused those wrongful convictions, have been publicly disciplined.
I myself turned in prosecutors to 3rd and 4th Departments, including attorneys WORKING FOR THOSE DEPARTMENTS - with zero results.

Monica Duffy did not disclose to the public that her Committee, as well as the Committees for the 4th Department, dismiss complaints AGAINST THEMSELVES - while there is no alternative forums to file complaints against them but with themselves.
And that is, too, a disciplinary violation that goes unaddressed.
Monica Duffy, of course, succeeded in browbeating the witness before the Commission into recanting his testimony about selective nonenforcement of attorney discipline against criminal prosecutors:

After all, Mr. Downs is an attorney and knows that whistleblowers of official misconduct get targeted by disciplinary committees, while prosecutors are protected.

And Mr. Downs would have become such a target, had he not humbly retracted his testimony.

Now Mr. Downs, who dismissed complaints against judges for 28 years of working in the Commission for Judicial Conduct, who co-founded a group that is supposed to help victims of wrongful convictions, obviously considered it a safer path to "absolutely agree" with Monica Duffy who, as the head of a disciplinary committee that DOES NOT prosecute prosecutors (criminal or civil) is one of the REASONS why victims of prosecutorial misconduct do not have closure.


Because she didn't want to prosecute those powerful prosecutors, especially because many of those prosecutors have since become judges, and judges hold in their hands Monica Duffy's own license and livelihood to the tune of $140,508 a years, with benefits - and Monica Duffy knows firsthand how investigation of a judge may result in losing one's law license, because SHE DOES IT HERSELF - to other people.

Because what she said when she was denying the obvious - that her committee DOES NOT prosecute prosecutors who commit misconduct, or any other well-connected attorneys or attorneys working for the government or having "friendly", familial or political ties with the government - was a lie designed to deceive the public, the lay consumers, and to delay reform of the attorney regulation system, by which Monica Duffy herself profits, at a rate of $140,508 per year, with benefits.

I am going to file yet another complaint against Monica Duffy, for this particular lie - and see WHO and HOW will investigate and prosecute that complaint.

I will keep you informed about the progress of that complaint through this blog.

Stay tuned.
Posted by Tatiana Neroni at 3:22 AM