I've written on this blog at the end of August and yesterday about defiance by state governments of the U.S. Supreme Court decision in North Carolina State Board of Dental Examiners v. Federal Trade Commission of February 25, 2015 which declared as a federal antitrust violation not subject to "state exception" immunities the regulatory scheme where super-majorities of private professionals regulate their own profession in a manner quashing competition and without state oversight.

Here is the example of such defiance by the Appellate Division 4th Judicial Department.

Appellate courts are at the core of the problem because they issue rules that require the attorney disciplinary committees to be structured as super-majority of private market players, an arrangement that, after the U.S. Supreme Court decision became nothing more or less than a private criminal cartel running to quash competition in violation of federal antitrust civil and criminal laws - with appellate courts as the criminal cartel's organizers and participants, because "adjudication" of attorney disciplinary proceedings brought by criminal cartel by creators of criminal cartel, all themselves licensed attorneys (all appellate judges are) cannot be seriously considered a neutral state oversight.

Now, the decision of the U.S. Supreme Court in the North Carolina Board of Dental Examiners v. Federal Trade Commission (the one that state bar associations fought tooth and claw, without success) was issued on February 26, 2015.

As of that date, the State of New York had to:

(1) change the super-majorities of private attorneys to super-majority of legal consumers not tied to the legal profession;

(2) establish statutory oversight over the market players by a NEUTRAL state body with a veto and modification power - which, of course, is not a court where all judges for whom the law license is a pre-requisite of holding their well-paid position, and thus market players subject to regulation

None of that was done, and the Attorney Disciplinary committee of the 4th Department remains an anti-competition cartel comprised of super-majorities of market players, licensed attorneys, acting without any oversight required by the U.S. Supreme Court decision.

Now, half a year after the U.S. Supreme Court decision, the 4th Department continues to condone the antitrust activity that it created - disciplinary proceedings against attorneys brought by private cartels of private attorneys acting under the color of state law in violation of federal antitrust laws.

Below is a scan from the 4th Department's list of decisions in attorney disciplinary matters for this year. 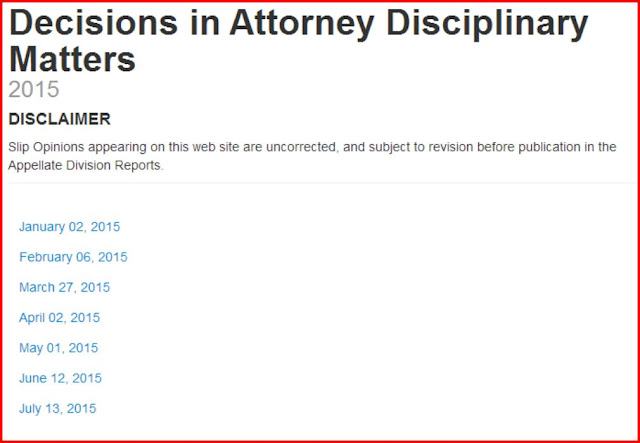 The list clearly shows that after February of 2015 when the U.S. Supreme Court has made its anti-cartel decision pertaining to occupational regulation scheme, the 4th Department did not halt disciplinary proceedings by private cartels/attorney disciplinary committees acting in violation of federal antitrust laws (both civil and criminal) and issued a series of decisions in such cartel-generated and cartel-run proceedings.

The composition of attorney disciplinary committees of the 4th Department, regulated exclusively by the 4th Department itself, remained the same - a super-majority of market players, acting without any oversight.

Here are the lists of such decisions and the names of attorneys affected by them.

I do not object to restoration of attorney licenses which were revoked by in violation of federal antitrust laws to begin with.

I do object as to revocation of attorney licenses and to any kind of discipline imposed upon attorneys through prosecution by such private cartels.

I know from my experience as an attorney representing a client in disciplinary proceedings and representing myself in such proceedings (I wrote a lot about fabrication of the case and transcripts in these proceeding) that courts which are creators of the private regulating cartels conceal the true reasons for their decisions, presenting to the public smoke screens claiming that the public is actually protected by the orders of suspension and disbarment.

Yet, since the courts are part of the problem, and since, in my experience, courts conceal records of disciplinary proceedings even when release of the records is required by law, I have no trust, nor should the public, in the integrity of such proceedings.

By the way, before the U.S. Supreme Court decision in February of 2015, in fact, nearly a year before that, in March of 2014, I raised the issue of such antitrust violations in the attorney regulatory scheme in my own disciplinary proceedings.

The argument was rejected without an explanation by the 4th Department.

When I asked for a reasoned decision in October of 2014, the 4th Department, once again, denied the motion to renew and re-argue without an explanation, sealed the proceedings and punished me, imposing upon me an anti-filing injunction in December of 2014.

When the decision of the U.S. Supreme Court came out in February of 2015, indicating that I was right in my arguments back in March of 2014, the 4th Department did not revise its rejection of my arguments in September of 2014, did not revise its anti-filing injunction imposed upon me in December of 2014, and allowed me to be harassed by the private cartel from January to May of 2015 with criminal charges for allegedly violating the sealing order that was made under a statute that was designed to protect MY privacy rights - which I expressly waived in writing.

But back to the lists.  Here they  are, and each one of the decisions disciplining an attorney under the existing regulatory regime is, most likely, a federal antitrust violation, a violation even more blatant since it is done by a court and by a private cartel established and maintained by that court: 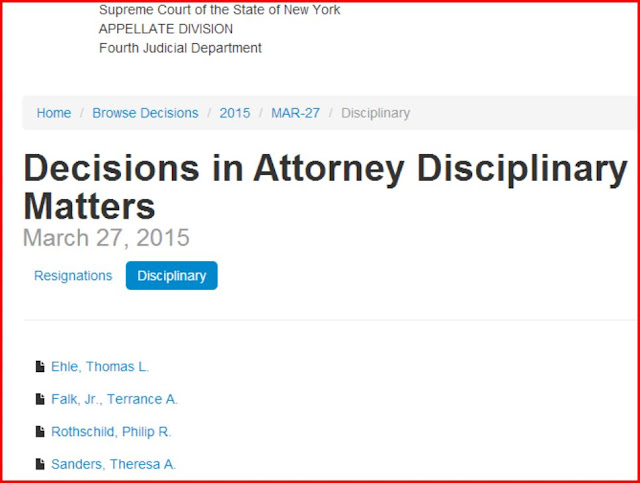 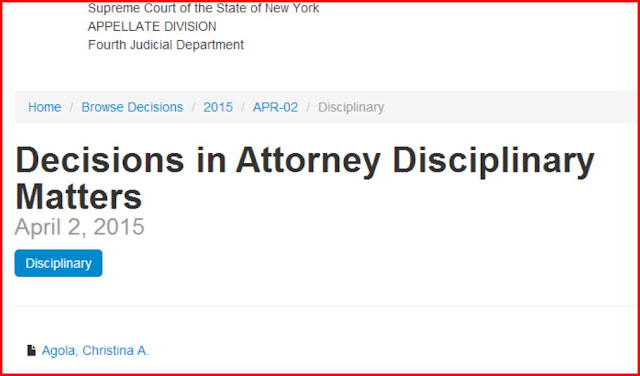 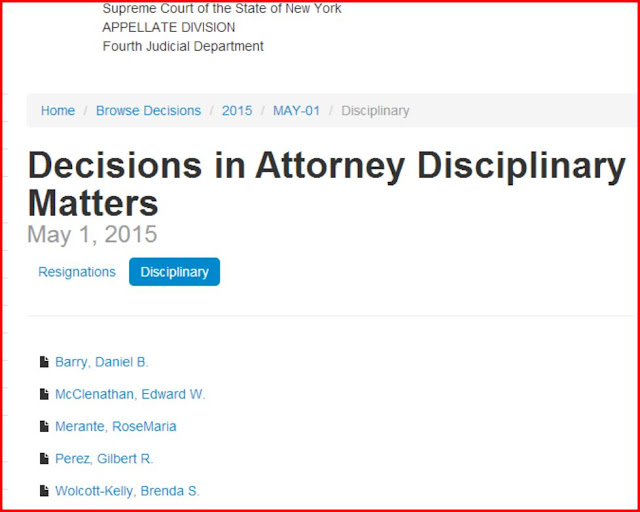 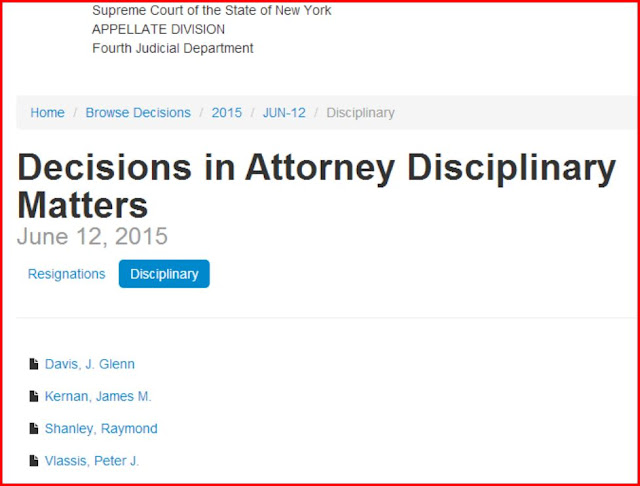 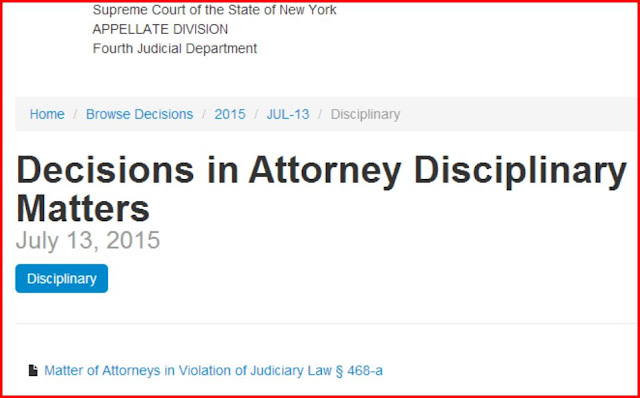 Will the FBI investigate violations of federal law by the Appellate Courts of the State of New York and members of New York attorney disciplinary committees?

I will hold my breath.

Is the Director of the FBI a licensed attorney?  That would be the decisive point as to whether to investigate or not, I guess.  Right?

Posted by Tatiana Neroni at 7:45 AM