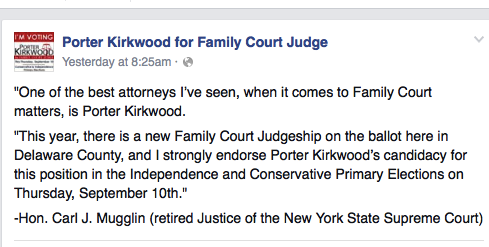 I already wrote about Carl Mugglin on this blog, only in connection with the case decided by the U.S. Court of Appeals for the 2nd Circuit 10 years ago where the court recognized as "governmental interest" the "right' of the government to hire police candidates with an intellectual level only below a certain level - to allegedly prevent turnover.

In that connection, I quoted priceless words of Carl Mugglin that I will never forget, that he told me, a female attorney, representing a female client who was a college professor, at an appellate conference held after his retirement (he retired in 2007, I was admitted to practice law in 2009, so our paths as attorney and judge could never cross) - "you will dig a hole for your client, Mrs. Neroni, with your intellectual efforts".

My client was shocked, I was shocked by that statement - because it showed that for the settlement officer, a retired appellate judge, intellect in a woman was a negative that will lead to trouble.

Carl Mugglin also dropped at various appellate conferences, where he shared his wisdoms without getting acquainted with the essence of cases and where his role was only to inquire whether parties want to settle (but never coerce them into settlements), the following pearls:


It is interesting to mention that the issue of depositions in a church was not within Carl Mugglin's authority to even discuss or touch upon.  He simply undertook to lecture to a female attorney condescendingly and to use her as a captive audience at an appellate conference to share his unsolicited wisdom.

Carl Becker's misconduct was legendary and was subject of at least 9 lawsuits, all of which were dismissed on the basis of absolute judicial immunity for MALICIOUS and CORRUPT acts - without reaching merits of cases.  Such dismissals left Carl Becker's misconduct unaddressed, yet, all lawsuits were brought on sworn statements of plaintiffs and thus at least raise issues whether such misconduct happened.

Yet, Carl Mugglin, himself a retired judge who thinks that women should hide their brains someplace far away from his male pre-eminence to stay out of trouble, while his supported judicial candidate Becker had a well known bias against women, now wants to put on the judicial throne Becker's apprentice who is no better and may be worse.

Carl Becker ran from the bench into the protection of an "early retirement" on July 31, 2015.

Carl Becker announced his retirement, coincidentally, one day before the press-release by the New York State Comptroller about results of audit in Delaware County finding that 8.7 million (!) dollars worth of contracts were given (I wonder whether Becker or his connections had a paw in the contracts), without public bidding, to "third party contractors" - which could not be done without approval of the new County Attorney Porter Kirkwood.

Carl Mugglin cannot pretend he did not know about either one of these illegal deals.  They were well publicized in the County, by the Walton Reporter, his town newspaper.

Yet, now Carl Mugglin is lending the authority of his retired judicial office to endorse Porter Kirkwood as eligible to be a judge - even though the only thing Porter Kirkwood is "eligible" for is to be criminally investigated for his involvement in bypassing the public bidding law in the County's award of 129.6 million dollar worth of contracts in one year only (!) to "third party contractors" (and not only for that). 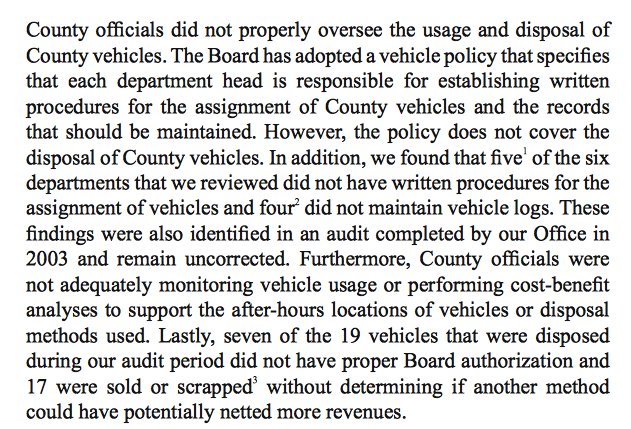 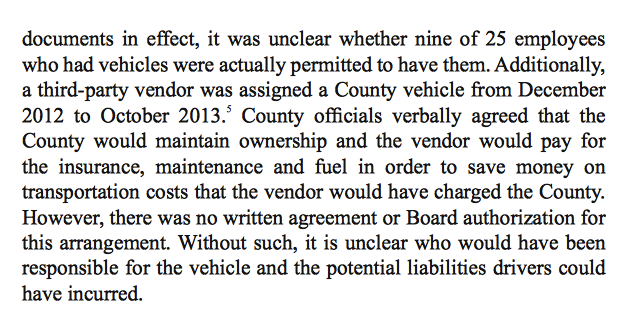 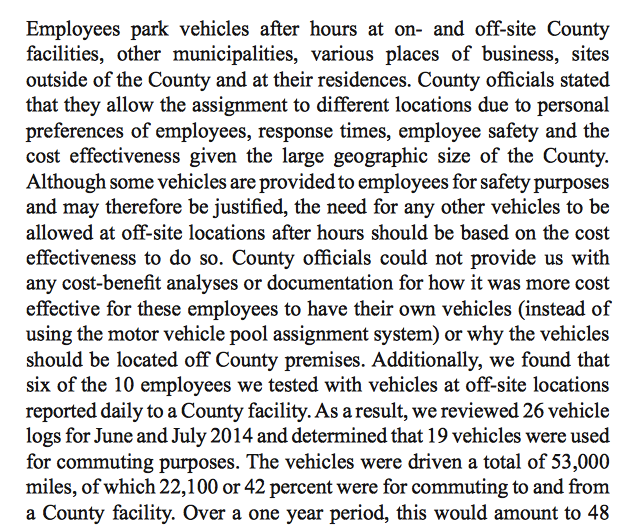 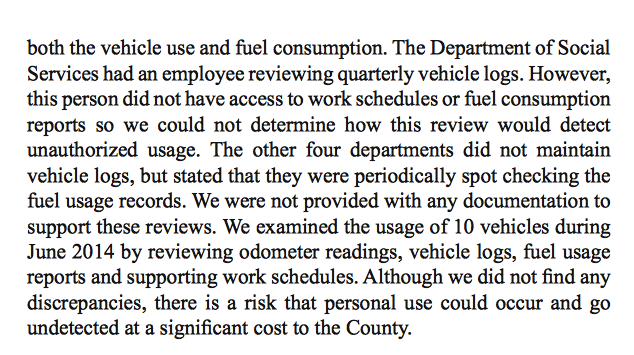 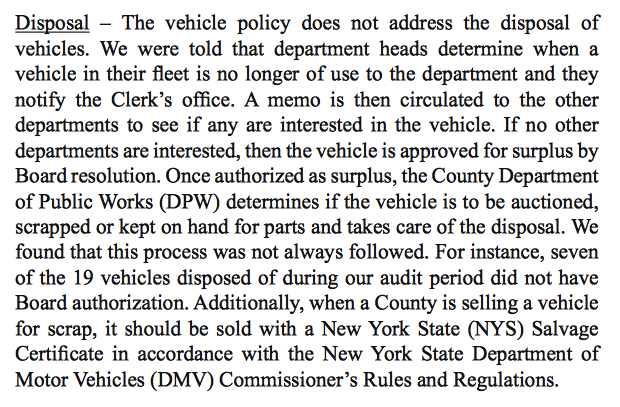 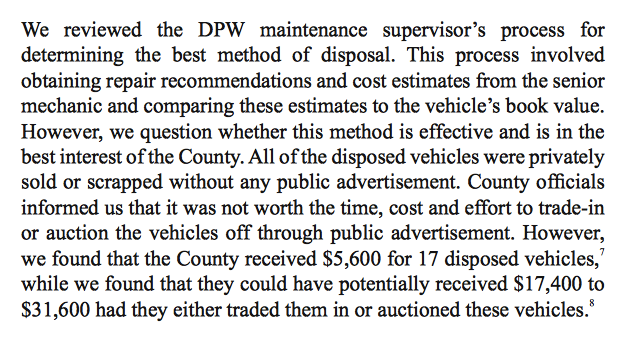 "The County may not be getting the best value for the disposed vehicles" is the understatement of the century.  It is very obvious fraud upon taxpayers, to be prosecuted by the County District Attorney as a crime.

Porter Kirkwood, remember, approved of such sales and is thus participant in the fraud.

Were Porter Kirkwood, the senior mechanic and the senior mechanic's brother investigated and prosecuted by the other judicial candidate, Delaware County District Attorney Richard Northrup?  Of course, not.  He was at that point too busy prosecuting the victim of his employee's nephew Derek Bowie for a non-existent crime fabricated by Derek Bowie to escape liability for vehicular assault and attempted murder.

He was also too busy fabricating evidence in that case, and he was too grateful to Porter Kirkwood for the third prosecutor (illegally financed out of conviction fines) to prosecute his benefactor.

Here is another piece out of the May 6, 2015 NYS Comptroller's audit of Delaware County for 2013-2014 (when Porter Kirkwood was a County attorney): 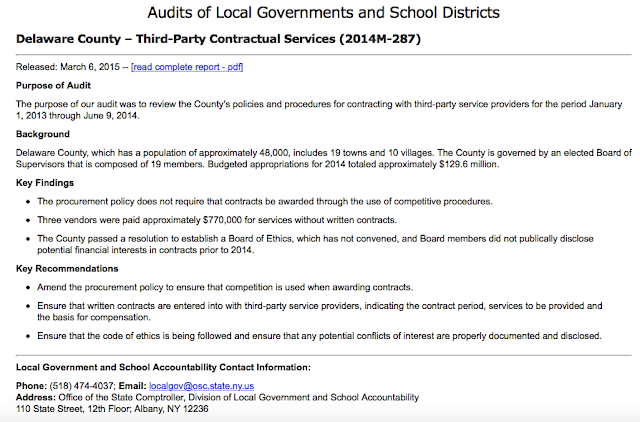 Note the number of annual "procurement" - that's the contracts that were supposed to be submitted to public bidding, but never were so submitted.

I am filing today a FOIL with the Delaware County to verify who were the happy recipients of the "procurement" contracts mentioned in the audit - and will make the information public on this blog.

I already wrote in one of my previous blog posts about a trio of buddies:

Apparently, Porter Kirkwood did a good job approving contracts in backroom deals, and for that he is supposed to be now given a gift of judgeship and a taxpayer funded enormous salary and pension?

Playing ball with the ol' boys' club, and placing the club rules above the law is what makes Kirkwood eligible, in another judge's eyes, for the bench?

We had enough dishonest, sexist, incompetent judges so far.  We do not need more of the same, and worse.

Porter Kirkwood has just approved 129.6 million of backroom contracts plus $770,000 of no-contract payments in 2013-2014, just read the audit of the NY State Comptroller.

County Attorney must approve  any county contracts, so there is no question about Porter Kirkwood's involvement here.

Moreover, Porter Kirkwood has just approved, in the summer of 2015, while running for the judicial office, an illegal deal for a prosecutor to be funded out of conviction fines.  He knew it is illegal, yet, he approved it on behalf of the County.

There is no more proof needed to see that Porter Kirkwood does not consider the rule of law as mandatory for himself, and there is no chance that a corrupt County Attorney will miraculously become an honest judge.

The question arises - was Carl Mugglin paid for his endorsement of Porter Kirkwood in this judicial campaign?

I will not put it beneath Porter Kirkwood to do that.  He did not put beneath him to do backroom deals, big time, as the audit discovered, and only Porter Kirkwood's obvious connections saved him from criminal prosecution for fraud, imprisonment for a felony and automatic disbarment.

Porter Kirkwood should be investigated and prosecuted for fraud, not elected as a judge.

Vote against Porter Kirkwood in the primaries and at the general elections.

Posted by Tatiana Neroni at 8:21 AM