I obtained from the New York State Board of Elections campaign finance reports of Porter Kirkwood who is running for the seat of the Family/County judge in Delaware County.

I already wrote on this blog that Porter Kirkwood has zero integrity and should be disbarred, not elevated to the position of a judge - at least, for his role in approving $129.6 mln in public contracts to be awarded without public bidding plus $700,000 without even written contracts - and that's only in one year, and according to conservative audit of New York State Comptroller.

So, this wonderful person is running for a judge, and I wanted to check who supports his election efforts financially.

First of all, I must state that you will not be able to find Porter Kirkwood's campaign finance reports on the NYS Board of Elections website.  I tried, the database does not return any results.

I obtained Porter Kirkwood's Filer ID and am now making it public - it is C03616.

When you put in that Filer ID, you will get to his campaign finance reports.

I strongly suggest people who foresee appearing in front of Porter Kirkwood to download all of his campaign finance report for purposes of future cross-reference for conflicts of interest.

Porter Kirkwood was also caught in awarding millions of dollars in public contracts without public bidding.

Think how he will be awarding attorney assignments when (and if) he becomes the Family/County judge.

Therefore, first of all I started with the list of attorneys who so far contributed to Porter Kirkwood's election campaign.

Here is the list that I cut out from Porter Kirkwood's campaign finance reports:

Christine Becker is not an attorney, but she is married to attorney and retired judge Carl Becker.

Leslie McKeegan is not an attorney, but she is wife and sister-in-law to two local attorneys.

John Hubbard is Chief Assistant District Attorney of Delaware County who will be appearing in front of Porter Kirkwood as a County judge, and as a Family judge in child abuse cases where the DA's office is, by statute, a necessary party.

Retired appellate judge Carl Mugglin, friend and supporter of the retired monster judge Carl Becker.  Has become famous because of his phrase that a female attorney will dig a hole for her female client with her intellectual efforts.  A supporter of criminal trials in churches.

Despite a Las Vegas address, Mr. Mackin is a New York lawyer out of Hancock, New York. 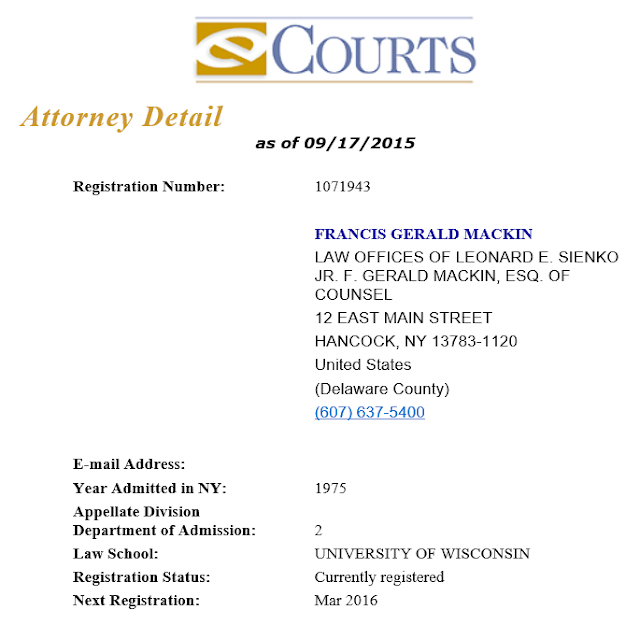 Mr. Grayson is often appointed as a referee in residential foreclosures in Delaware County Supreme Court.  Since the County/Family Court judge is expected, as his predecessor, to be appointed an Acting Supreme Court justice, apparently, Mr. Grayson is trying to keep himself on the prospective referee list.

Charles Hill is more of a commercial litigation and wills-and-trusts attorney.  Since the County/Family Court judge will also be a Surrogate and, likely an Acting Supreme Court justice, Mr. Hill apparently tries to bow to the prospective judge ahead of time with a present.

Thomas Gallagher is a staple on the Family Court assigned counsel list, and, apparently, wants to keep it that way.

Frank Miller already obtained certain breaks from Judge John Lambert which his client was not entitled to, and, apparently, hopes for even more breaks when the former Delaware County attorney may replace Judge Lambert in that lawsuit after election, to save Judge Lambert time for travel from Otsego County.

Frank Miller is also the attorney who has handled an "investigation" into police misconduct of a local police officer and deposed for that purpose many people without telling them that he is not a neutral public investigator, but an attorney hired by Delaware County and by the Village of Delhi to defend these entities from liability.

When that apparent conflict of interest or not-so-forthcoming behavior was brought up to his attention, he threatened me with a complaint to disciplinary authorities because I dared to soil his impeccable Martindale rating.

Frank Miller is known to be aggressive and, in my experience, outright rude at depositions.

Ms. McCue is on the Family Court assigned counsel/law guardian list and, apparently, wants to keep it this way with the prospective new judge.

I posted this list of contributors first because potential conflicts of interest in the future appearances before Porter Kirkwood as a judge are, probably, most serious here, and people should know about these campaign donations by these attorneys and should remember the names of these attorneys for future reference.

I also understand that money does not smell and that anybody has a right to donate to a judicial election campaign - as well as to accept donations.  Yet, to me there is certainly an appearance of impropriety when an attorney sponsors a judicial candidates with knowledge that he or she will appear in front of the judge, after elections, in the future, no matter how small the donation was.

And, in my opinion, there is an appearance of impropriety for a judicial candidate to accept donations for the election campaign from attorneys who will then expect to get lucrative assignments from that judicial candidate, once he becomes a judge, or other favors.

Studies show that judges most often rule in favor of attorneys who contributed to their campaigns.  Even the famous satirist John Oliver recently took up judicial elections as "justice for sale".

Thus, accepting contributions from attorneys amounts to a disqualification from these attorneys' cases to avoid appearance of impropriety (if Porter Kirkwood, of course, wants to follow rules of Judicial Conduct when/if he gets on the bench), and bringing a judge from out of the County will add to taxpayers' burden.

Maybe, for Porter Kirkwood no conflicts of interest exist - considering his recent approval of $129.6 mln in public contracts without public bidding (I will show in the next posts how Porter Kirkwood was "rewarded" for that approval by various members of Delaware County Board of Supervisors who supported his judicial election campaign financially).

Yet, because, apparently, for Porter Kirkwood no conflicts of interest exists, Porter Kirkwood should not be allowed to get on that bench, no matter who supports his judicial campaign financially.

Posted by Tatiana Neroni at 8:12 PM