What made the U.S. Supreme Court disregard the "domestic relations" deference in so many cases

All of the above are just a few issues that the U.S. Supreme Court undertook that directly relate to domestic relations.

Here is a portion of the recent dismissal of the case Davis v Kushner in the U.S. District Court for the Northern District of New York by Judge Mae D'Agostino (a sua sponte dismissal of a poor unrepresented person's handwritten complaint without giving that person time or opportunity to retain counsel to address issues upon which the report threatening to dismiss the complaint was based, with 14 days' notice to complete all the required education (high school, college, law school) and take a crash course in civil rights litigation, where rules baffle even seasoned attorneys). 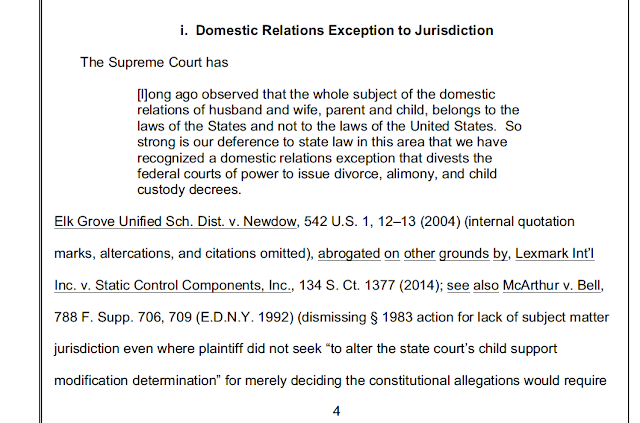 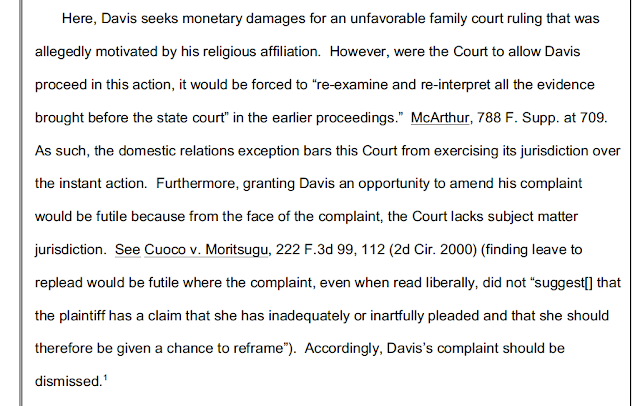 The piece is full of arrogant hypocrisy in blocking the person's only path to a legal remedy made available to him by a federal civil rights statute enacted by the U.S. Congress.

It arrogantly cites to the 2nd Circuit case (where civil rights appeals are rubber-stamped by 80-year-old judges without reading them in "summary" opinions) applying "Rooker-Feldman" doctrine that cannot possibly apply to a case decided by a court of limited jurisdiction where constitutional issues MAY NOT be raised because, once again, jurisdictional restrictions upon authority of the Family Court.

What is not raised in the lower court, may not be raised for the first time on appeal.

What may not be raised in any state court, is not subject to the appellate Rooker-Feldman bar.

Yet, the rubber-stamping courts seeking to eliminate civil rights cases by all means, do not care.

As to the "domestic relations exception", you will be seeking in vain for any traces of any such "exception" to federal courts' jurisdiction in the Civil Rights Act.  It is not there.

Yet, the U.S. Supreme Court apparently picks and chooses which of the "domestic relations" to subject to its "deference" doctrine and which not to - which looks also as an unlawful policymaking to me and selective enforcement of even judge-created law - on a whim.

So, do we need any more proof that we have "the rule of whim" in this country in the place of the declared "rule of law"?

When exceptions to jurisdiction of courts that are only in Congressional hands, are invented on a whim by courts for themselves to control their dockets and protect government officials from accountability (while in most cases federal judges have undisclosed ties to those same government officials, from blood ties to friendship ties to financial ties to "former colleagues" ties), and then applied equally on a whim by the same courts, picking and choosing to which case the whim should apply, and which case, by whim, should be heard to make the most publicity and fame for judges - that is not called the rule of law, ladies and gentlemen.
Posted by Tatiana Neroni at 8:28 AM