The Report of NYS Statewide Commission for Attorney Discipline: fraud upon the court by 3rd Department on the 3rd Department? Oh, well

I am continuing to publish my analysis of the Report of the New York State Statewide Commission on Attorney Discipline.

2 officials from NYS Appellate Division 3rd Department (a deputy clerk and counsel for the chief judge Karen Peters) and 2 officials from that court's Committee for professional discipline (Monica Duffy, Samantha Holbrook) were members of the Commission, and thus, authored the Report and knew about its contents.

Parallel to the work of the commission I had two ongoing cases:

On page 9 of the Report published on September 24, 2015 I read that the Third Department has a standard of proof in its disciplinary proceedings by clear and convincing evidence.

If that was true, disbarment of my husband would not have been possible, because he was disbarred WITHOUT A HEARING, based on application of the so-called collateral estoppel to a decision made to a lower evidentiary standard, by preponderance of the evidence.

My claims to the 3rd Department that my husband's case needs to be decided to the standard "by clear and convincing evidence" were rejected.

On pages 40-42 of the Amended Complaint in Neroni v Zayas, on February 9, 2015, I put in the following claims on behalf of my husband Frederick J. Neroni, specifically claiming that the roller-coaster of standards of proof in the 3rd Department, with:

is arbitrary and a violation of attorneys' due process and equal protection of laws. 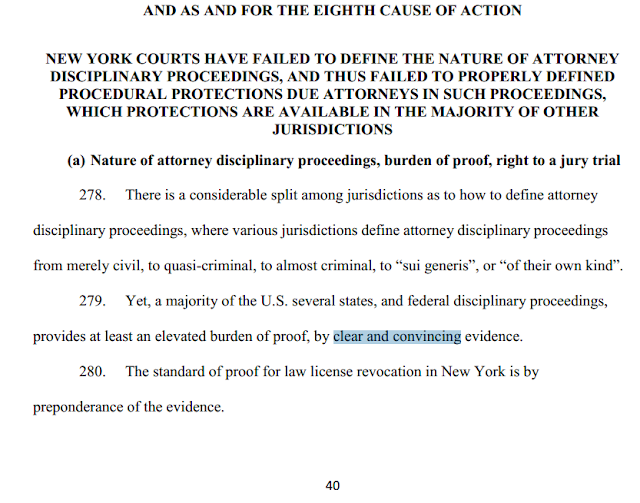 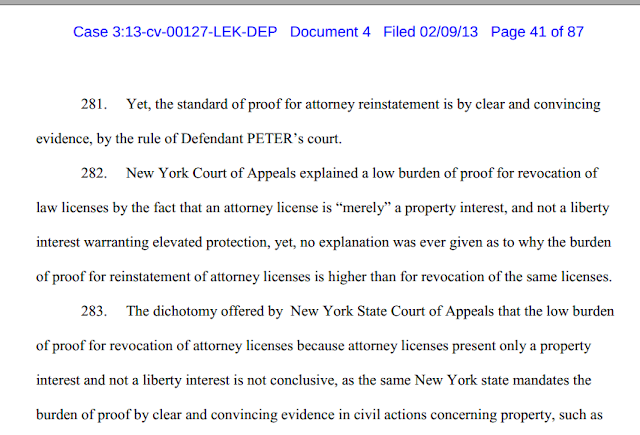 Defendants in that case were the same Duffy and Peters.

They had ample opportunity to say - hey, you are wrong, our standard of proof (established by Peters as a legislator and then applied by Peters as an adjudicator) is clear and convincing evidence throughout!

No, they did not say that, because had they said that, I would have immediately moved to vacate the order of disbarment of my husband.

And, they fought tooth and claw in my husband's disciplinary case arguing to the court that the proper standard of proof is by preponderance of the evidence.

So, in Neroni v Zayas, Duffy and Peters perpetuated their misconduct by obtaining a dismissal of my claims as to this roller-coaster of evidentiary standards on Rooker-Feldman grounds which were not applicable (that was on March of 2014 and June of 2015), and then, on September 24, 2015, they stated with straight faces in the Report on FAIRNESS to attorneys during discipline that their standard of proof is actually by clear and convincing evidence. 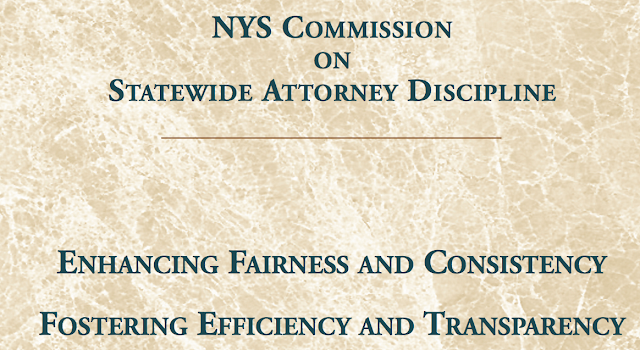 I cannot sue them for fraud - they will cover up with immunity.

I cannot have them disciplined - because people sitting on the Judicial Conduct Commission are attorneys whose own licenses are in the hands of judges they are investigating, and Duffy already refused to refer the case against herself to a special investigator and prosecutor, instead dismissing it.

I doubt I can bring criminal proceedings against them, because Albany County District Attorney is a licensed attorney, was already censured for criticism of judges and will tiptoe a thin line wherever judicial misconduct is concerned.

So - what is the remedy for this fraud?

What remains is - for any pending disciplinary cases in the 3rd Department, DEMAND application of their declared standard of proof - by clear and convincing evidence, and quote page 9 of the Commission's report.

Posted by Tatiana Neroni at 1:46 PM