I wrote today in the blog about a retired judge acting as referee in my attorney disciplinary case who has flaunted the court order ordering him to conduct a fact-finding hearing and report of findings of fact to the court, Appellate Division 4th Department.

Referee Sirkin also hired a stenographer who misrepresented in the previous transcript that the transcript was of a "hearing" instead of a pre-hearing scheduling conference where Referee Sirkin stayed the hearing until resolution of my motion with the Appellate Division.  The stenographer also misrepresented that the prosecution and I allegedly made stipulations as to evidence submitted during the hearing, which never occurred.  I pointed that out to the court on a motion, the court denied my motion to disqualify Sirkin without an explanation, allowing Sirkin to continue to serve as a referee.

On December 8, 2014 the court issued a new scheduling order specifically telling Sirkin what his duties were - to hear and report the factual findings back to the court.

Instead, Referee Sirkin usurped the court's authority to decide motions and, without holding any hearings whatsoever, granted the prosecution's motion for a summary judgment, which the prosecution, knowing that what referee Sirkin is doing is completely unlawful, gleefully accepted the bounty.

I looked up on the Internet whether Referee Sirkin was involved in misconduct as a judge.

I did not have to go very far.

Of course, everything was affirmed on appeal and dismissed "without prejudice" by the federal court, but Steven R. Sirkin was sued by a criminal defendant in federal court in 2010 for misconduct pertaining to not affording a litigant a hearing and not preserving the record of proceedings properly.

In People v. Walker (a criminal proceedings) the criminal defendant claimed that Judge Sirkin held a Sandoval hearing without the presence of the defendant, a reversable error and an error that should take the judge off the bench, and that the court reporter did not reflect presence or absence of the defendant at such a hearing - which was Sirkin's duty as a judge to make sure that the record reflected.

The conviction was affirmed on appeal, after a de novo review by the 4th Department - but with a very strong dissent. 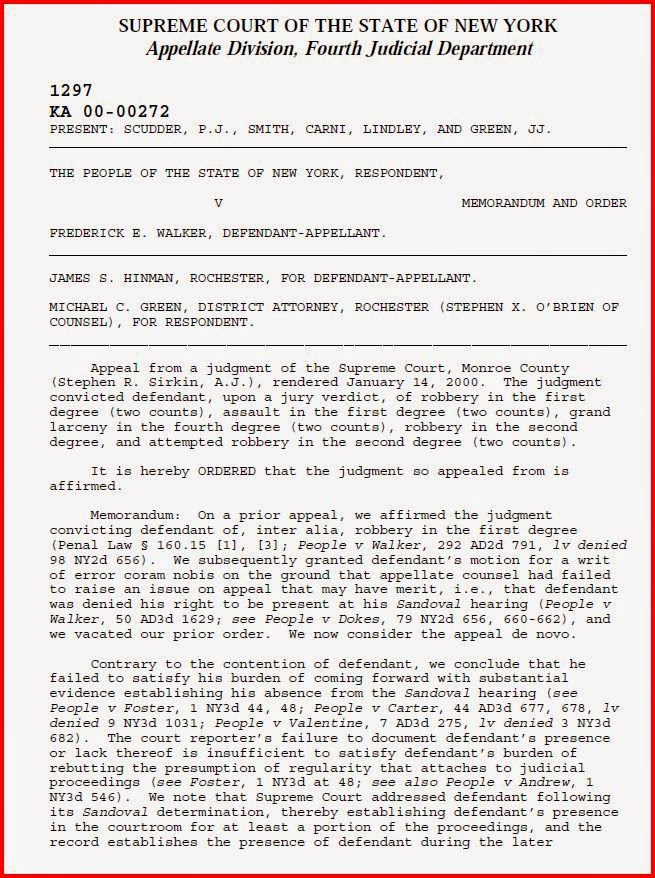 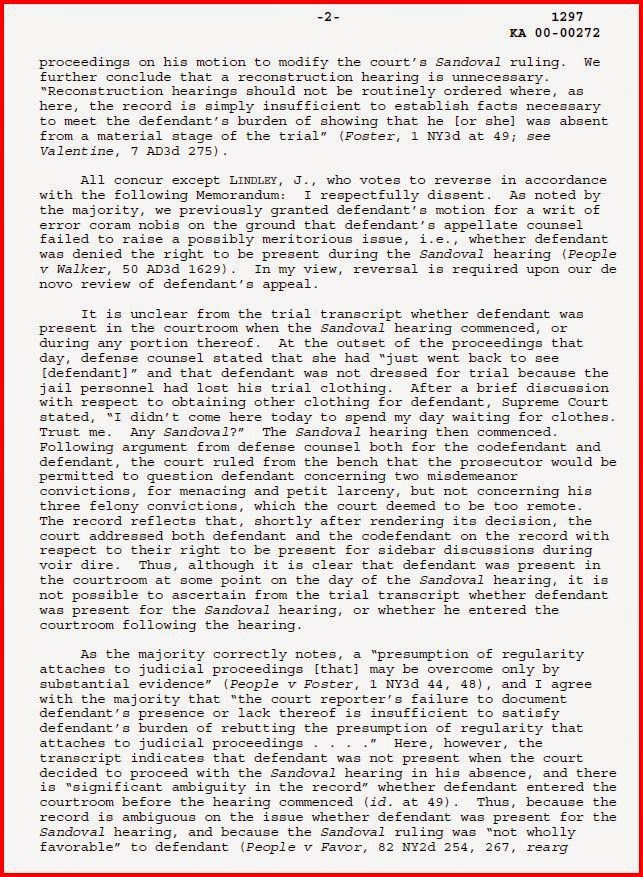 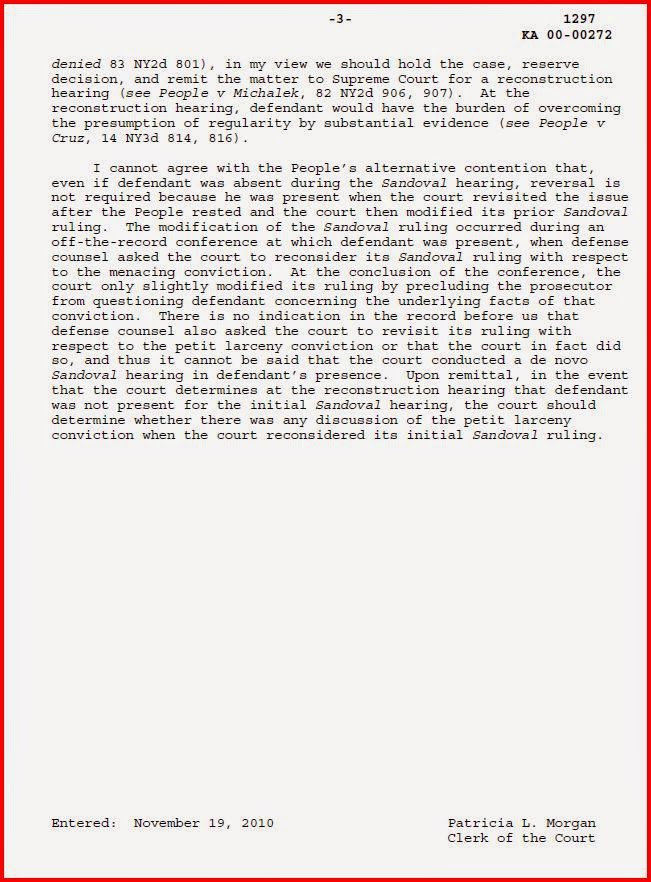 Here is what the indigent defendant says about his absence from the Sandoval hearing in his federal civil rights lawsuit against Sirkin in the U.S. District Court for the Western District of New York filed in 2010 (a public record that I obtained from www.pacer.gov):

The federal court protected Sirkin from embarrassment by dismissing the lawsuit "for failure to exhaust state remedies", after granting the petitioner a poor person status: 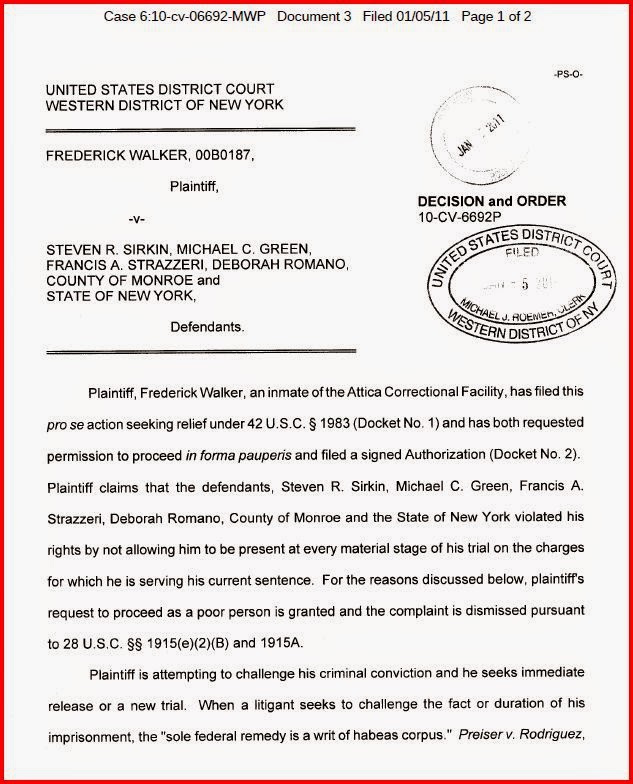 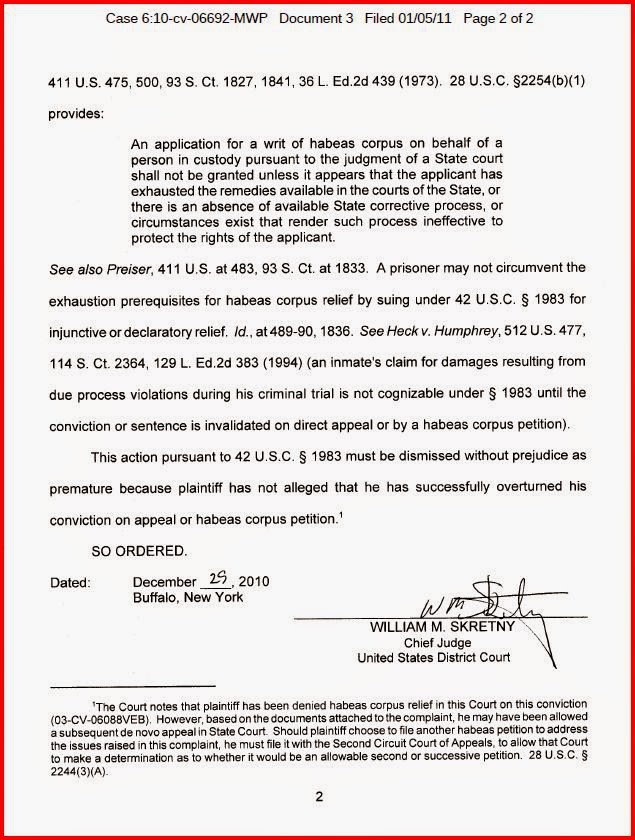 Sirkin was never disciplined for his shenanigans in People v. Walker and was assigned to my attorney disciplinary proceedings, apparently as a "referee of choice".

I wonder (a rhethorical question, of course), why I am so "blessed" with crooked judges presiding over my cases?

Judge James Tormey, the only judge in the history of New York State sued by an employee for retaliation for refusal to engage, at the judge's request, in a political espionage against a fellow judge, presides over all proceedings where judges are involved.

Now Sirkin, another crooked (retired) judge who stubbornly would not follow the court order of appointment while presiding over a disciplinary proceedings over an attorney where Charge IV (fraudulently) claims that the attorney did not obey a court order.

Carl Becker who engages in ex parte communications left and right, conceals his disqualifying and non-discoverable conflicts of interest, sanctions an attorney for making FOIL requests of public records the judge files with the NYS Court Administration, assigns himself to all actions by the attorney who complained about him and sued him, sanctions that attorney after she sued him and turns her into the appellate division for "discipline", or rather, to be the tool of his private vengeance, under the guise of "protecting the public".

Appellate Division 3rd Department which ignores portions of the record in order to affirm Becker's sanctions against me, engages in ex parte communications with the disciplinary prosecution, refuses to give me access to the prosecution's "application" to the court for an ex parte order of transfer, refuses to recuse from any other cases and invents extra rules for me to filibuster my pending appeals.

Appellate Division 4th Department which refuses to give me reasoned decisions on my motions raising constitutional challenges, imposes anti-filing injunctions upon me for making such motions, without a notice or opportunity to be heard, appoints a crooked, disqualified and incompetent referee Sirkin to preside over my proceedings, while knowing his propensity to not allow people to have proper hearings - or proper record of hearings.

Moreover, Appellate Division 4th outdid all other courts by refusing to provide me a public hearing (which was my due process right) in a highly politically-sensitive case involving claims on my behalf of misconduct of multiple judges, as soon as I mentioned that I want public access and access by the media to my records and to my proceedings.

I think by refusing to provide me with a public hearing, New York State judicial system announced loud and clear why I am prosecuted - because I criticized the judiciary, and exposing judicial misconduct in New York is an ultimate taboo and blasphemy, punishable by loss of livelihood.

I am now convinced I need to turn the crew that engaged in prosecuting me, including Sirkin, into the federal investigation of corruption in New York.
Posted by Tatiana Neroni at 9:07 AM