Judge Mary Work changes the statutory law for the benefit of her former schoolmate and former client?


Judge Mary Work of Ulster County continues to harass me with demands to come to proceedings from which I withdrew by operation of law, after satisfying all conditions under New York Civil Practice Law and Rules, or CPLR 321(b).  She sent me a letter order ordering me to appear in court on January 16, 2015 and represent a person who I no longer represent, even though by statute, CPLR 321 (b) the judge has absolutely no right to do so, and I continue to wonder what kind of ties exist between Judge Work, attorney "Delice" Seligman and Seligman's client so that the judge would be at her beck and call to the point of unlawfully attempting to drag an attorney back into a proceeding the attorney withdrew from.

(b) Change or withdrawal of attorney.  1. Unless the party is a person


attorney and signed and acknowledged by the party. Notice of such change
of attorney shall be given to the  attorneys  for  all  parties  in  the
action or, if a party appears without an attorney, to the party.

My former client, a competent adult, not an infant, incompetent or conservatee of the court, released me from the case on notarized consent.

The consent was filed and served as required by CPLR 321(b).

The only exception to CPLR 321(b), CPLR 1201, does not apply because my former client, on the date she released me from the case by notarized consent, was a competent adult.

CPLR 321(b) does not allow the court to approve or disapprove withdrawal of counsel from the case on notarized consent.


Yet, in front of Judge Mary Work Attorney "Delice" Seligman.  That is the name this lady puts on her pleadings since August of 2013 when I had the displeasure of first meeting her.

Of course, there is no registered attorney in the State of New York by this first and last name, there is only a "Delores Felice Seligman", and New York rules require attorneys to report their change of name or address within 30 days of the change, which "Delice" Seligman did not do since August of 2013 that I know her.

Of course, there is no such law school as "NY" in New York.  There is a school though called "New York University School of Law".

Yet, Delores Felice ("Delice"?) Seligman did not put into her registration the correct name of her law school, yet another violation of the registration rules. 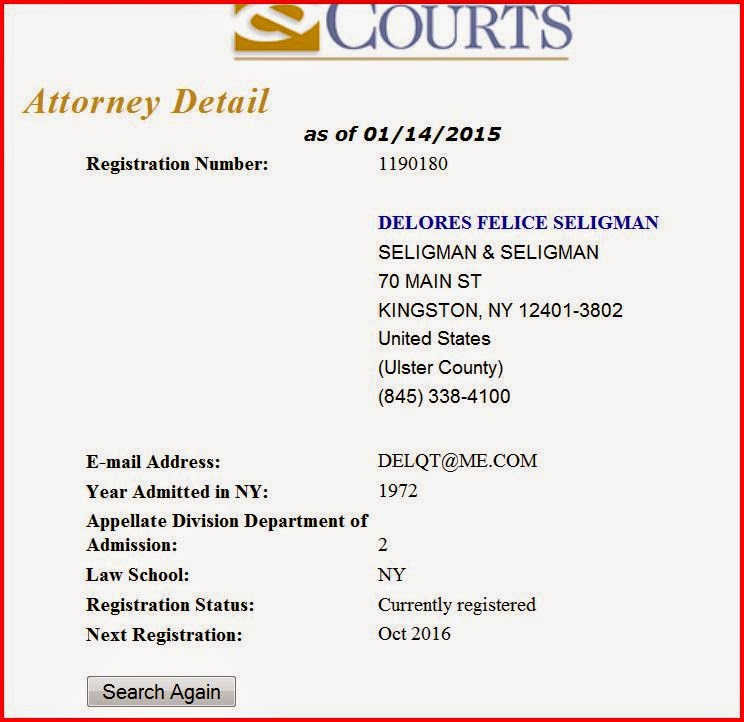 But apparently nobody gives a damn about compliance with attorney registration rules if the attorney in question is.... 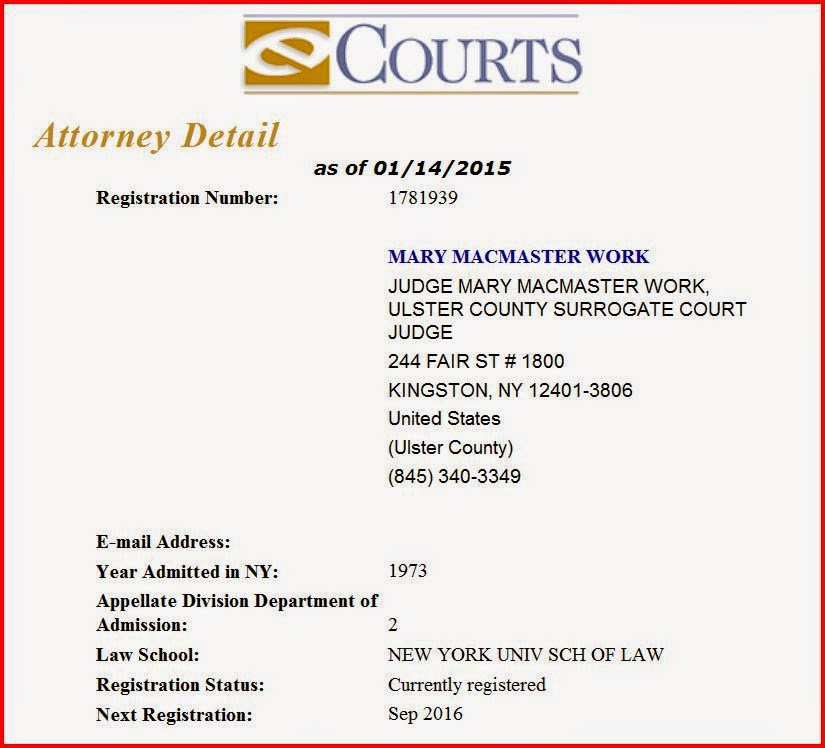 Likely, Judge Work and Delores Felice ("Delice"?) Seligman graduated from the same law school, one year apart, and were likely acquainted since then.

"Delice" Seligman represented in the proceeding a person who is a former employee of the Ulster County Department of Social Services.

Judge Work represented the Ulster County Department of Social Services as an attorney in 1988-1990.

(1) win a motion for a subpoena duces tecum without serving the custodian of the record, despite the requirements of TWO statutes in New York providing that:

(a) the custodian of the records must be served when a motion for a subpoena duces tecum on the records by the government is made;

(b) a motion in New York is made only when it is served - so if it was not served, it has not been made.

Judge Work granted to "Delice" Seligman a "motion" for a subpoena duces tecum, seeking records protected by state and federal privacy laws, while the motion has not been properly made under the existing STATUTORY law.

(2) Judge Work refused to vacate a judgment obtained by "Delice" Seligman in another court by misconduct and in violation of several other statutory laws, including the law precluding a divorce action to be filed in one court when it was previously filed and is still pending and not withdrawn in another court.

The refusal to vacate the improperly obtained judgment of divorce and stalling a motion to vacate in the divorce court for 9 months in order to allow a related action (relying on validity of the judgment of divorce) to proceed was clearly benefiting "Delice" Seligman's client, the Ulster County Social worker.

No disclosures were made by Judge Work as to her knowledge of the social worker.

The social worker in question, judging by her age, could be working in Ulster County Department of Social services at the same time as Judge Work represented that department in 1988-1990.

Rules of judicial ethics require that Mary Work should disclose her representation of a party in front of her, even if representation was over 2 years prior.

If "Delice" Seligman's client was a social worker at the time Mary Work represented the Ulster County Department of Social Services, Judge Mary Work may have extrajudicial knowledge about a witness in a case where she is deciding the witness' credibility determinations.

I asked for a jury trial, which request Judge Mary Work denied claiming that there is no right to a jury trial in proceedings in that particular court.  In fact, by statute, there is.  But, Mary Work disregards statutes that work in my former client's favor.

Now, on request of "Delice" Seligman, Judge Work refused to recognize yet another statute, under which I withdrew from the case on a consent to change counsel and issued an unlawful "letter order" for me to appear in the case despite the fact that,  by law, I am no longer attorney of record.

I will not be surprised that WHEN (not if) I do not appear on January 16, 2015, "Delice" Seligman will also ask her pet judge to impose sanctions upon me, and that the judge may just as well either sanction me for frivolous conduct or put me in civil or criminal contempt of court, both have a possibility of me ending up in jail.

I will not be at all surprised if on January 16, 2015 I will be sanctioned, possibly put in jail, by Judge Work for not coming on behalf of a person who is no longer my client by operation of law.
I am just making the public aware of that, of the applicable law, circumstances and possible connections of Judge Work to the party and attorney who are pushing for it to happen.
Posted by Tatiana Neroni at 9:42 AM