Criminal contempt was brought because the government was caught?


Part of "criminal" charges brought by Mary Gasparini against me within a civil proceeding, which, I believe, are now a public record as a matter of law since those are criminal charges and there are no secret criminal proceedings in New York, is an exhibit that Mary Gasparini claimed is the transcript of the appearance in my attorney disciplinary proceedings on January 12, 2015.

I was notified by the court that the appearance on January 12, 2015 was to be a scheduling conference.

I received no notice that the conference of January 12, 2015 was at the same time planned to be a hearing.

In the transcript provided by Mary Gasparini to the court in support of her "criminal" charges, the very first page, the appearances page, says nothing that the "proceeding" in question is actually a pre-trial conference: 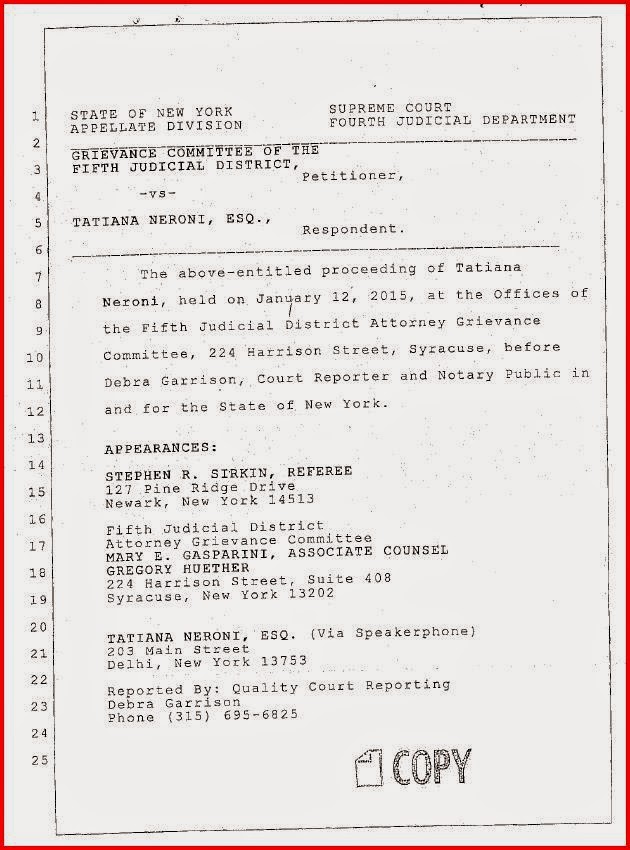 Somewhere in the depths of her Affirmation in support of her Notice of Motion for criminal contempt against me within a civil proceeding, Mary Gasparini utters the word "pre-trial", but cannot bring herself to say the word "conference".

On the same page, Mary Gasparini calls what was going on in front of Referee Sirkin (while noticed to me as a pre-trial scheduling conference) as a "hearing":

A pre-trial hearing, Ms. Gasparini?  Really?  From you, the CLE lecturer on attorney disciplinary rules and proceedings?  From you, a disciplinary prosecutor paid by the People of the State of New York - guess for what - to protect them from attorneys committing misconduct, not to save your own ass when you are caught in misconduct.

Don't you know, Ms. Gasparini that there is no such thing as pre-trial hearings in attorney disciplinary proceedings in New York?

Don't you know that, according to court rules, the referee only has a right to "hear and report", not for any "pre-trial hearings"?

I would have liked to have one, but none are allowed by the rules...

Moreover, Mary Gasparini provided to the court in support of criminal charges against me with the transcript of proceedings with the following cooked certification by Court reporter Debra Garrison: 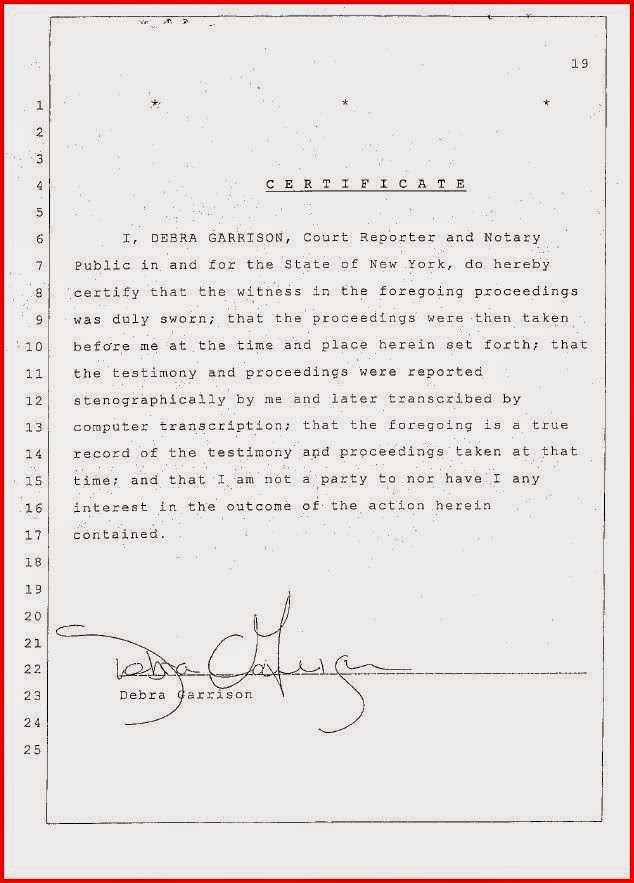 I would love to call Debra Garrison to testify in my criminal proceedings, to see whether Debra Garrison's voice can be perceived by anyone as a man's voice.

Moreover, Mary Gasparini provided an audio recording of the same January 12, 2015 "proceeding" to the court at the same time and claimed it was a "correct copy" of the proceedings, as reflected by the transcript.

Why then there is no voice of Debra Garrison swearing me in heard on the recording?

Why then there is no stipulations heard on the recording?

Why then there is no indication on the recording that I was "called as a witness", was "sworn in" and "testified"?

As to Debra Garrison, what can you say about the certified court reporter who hears the following:

and still files a transcript with the following: 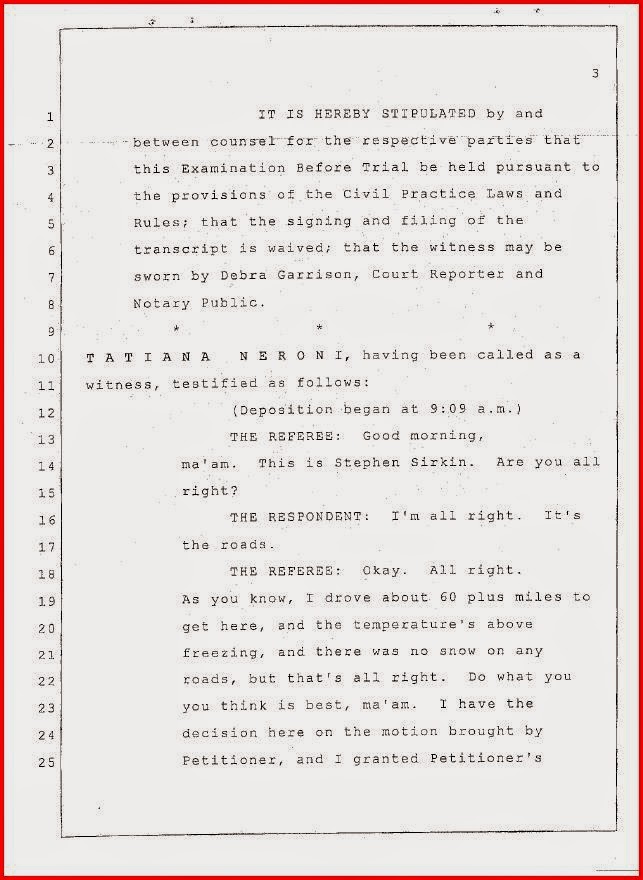 Is Debra Garrison tough on hearing?  Then she should not be a court reporter.

(1)  what I attended on January 12, 2015 was an Examination before trial;
(2) Civil Practice Law and Rules apply;
(3) Signing and filing of the transcript is waived;
(4) the witness (I did not know I was a witness or that I was called by anybody) is allowed to be sworn by Debra Garrison, Court Reporter and Notary Public.

On top of all of the above being not true, as is reflected in the recording, there are also the following "little discrepancies":


but who really cares when the ultimate goal is to "get" the outspoken attorney who consistently breaks the taboo of criticizing judicial and prosecutorial misconduct, incompetency and, at times, sheer stupidity?

Mary Gasparini already filed the above fraudulent submissions with the court and already served it on me by means of interstate commerce, U.S. Mail.

What Mary Gasparini did is, in my legal opinion


not to mention that it is also fraud upon the court, a misdemeanor in the state of New York punishable not only by a fine and 1 year imprisonment, but also with disbarment without a hearing.  As a legal expert, I have a right to express this legal opinion.
Mary Gasparini committed this fraud not to protect the public from me - because there is nothing to protect the public from.  What Mary Gasparini is trying to do through her desperate attempt to punish me criminally is

Of course, to avoid the obvious problem that a hearing was not given to me despite court order, the ultimate way of "dealing" with the problem for the Gasparini-Sirkin-Garrison team, was to falsify the transcript and to present it as if

(1) it was a hearing, not a scheduling conference;
(2) I was sworn and testified at that hearing;
(3) I made waivers and stipulations in that hearing.

Actually, the recording Ms. Gasparini supplied to the court shows that Sirkin, Gasparini and other people present in Gasparini's office on January 12, 2015 continued to discuss me ex parte after Sirkin stated that the conference is over, but forgot to disconnect the phone call.  Their discussion somehow did not make it into the transcript though.

The only thing that prevented the transcript from being cooked to the point that I actually substantively testified in a fact-finding hearing that never happened,  was the audio recording made of that pre-scheduling conference and promptly published on the Internet.

Otherwise I could easily see in the transcript 150 pages of my testimony admitting to every accusation cast at me by Mary Gasparini.

But, the recording obviously prevented the crew from cooking the books in a way that would allow them to escape.

Not being able to cook the books any further, Gasparini simply charged me with contempt of court - instead of filing a complaint charging the Referee for disobeying the order of the court to hold a fact-finding hearing for me on or before February 6, 2015 and his unlawful refusal to hold the same.

God only knows what ELSE Gasparini, Sirkin and Garrison would have put into that certification and that transcript, what else I allegedly would have "testified" to,  had the proceedings not been audio-recorded.

That is why I am charged with criminal contempt of court?

Because the government cannot deny now that it is cooking court transcripts and because I have proof now for the New York State Legislature clearly showing that creating an audio or even better - video recording - of court proceedings is actually a must, a requirement of due process of law because otherwise the courts will COOK THE TRANSCRIPTS.

There were, by the way, no rules for subpoening witnesses in attorney disciplinary proceedings in New York on January 12, 2015, and I was not notified by the court of any changes in those rules before January 12, 2015.

Lack of rules for subpoenas exists, as I understand, to short-change attorneys and deprive them of their right to defend themselves in such proceedings.

Yet, the lack of such rule backfired in my case against the prosecutor and the referee themselves.

And by the way, the court order that is now public because it is the basis of criminal charges against me, prohibited me to VIDEO tape, not AUDIO tape the proceedings.  I did not videotape the conference of January 12, 2015.  I was not there and I did not appear through Skype to make it even possible for me to do that.  I appeared by phone from Delhi, NY, and Mary Gasparini acknoweldged that under oath in her charges.

People of the State of New York!  What are the conclusions, beyond my own case, that must be drawn from all of this mess?

Only prompt publishing on the Internet of the shenanigans of the "honorable" judges and prosecutors can save people's constitutional rights in court proceedings, can save your

Otherwise they will simply COOK THE TRANSCRIPTS as they attempted to do in my case and your rights will be lost.

SO - push your legislators to repeal New York Civil Rights Law 52 that currently prohibits "televising, broadcasting or taking motion pictures of certain proceedings".  That law is standing in the way of your access to true justice.
Posted by Tatiana Neroni at 2:14 PM