I have recently started a series of blogs about the decision of North Carolina Supreme Court absolving an influential freemason Judge Jerry Tillet who was involved in abuse of office while he was trying to strong-arm police and town authorities who dared to arrest his son to back off his son's case, and who then pursued those public officials in the courtroom, before and even after recusal.

In that decision, 4 days before Christmas, the North Carolina Supreme Court claimed that the only way that judges in North Carolina (including themselves, authors of the decision) can be disciplined is through judicial discipline - even if they remain licensed attorneys while on the bench, and even when being an attorney in good standing is a pre-requisite of getting on the bench and remaining on the bench.

As I promised, I will publish a detailed analysis of the decision, which consists of:


This blog is about the main decision in this plurality opinion, by Judge Barbara Jackson.

While lawyers constitute a dominant force in all three branches of the government, being it central or local, state or federal, executive, legislative or judicial, the core issue of what is regulated - what constitutes the "practice of law" is not clearly defined in any of regulating jurisdictions, state or federal.

The North Carolina main decision in Judge Tillett's case makes the murky waters of attorney regulation even murkier - if that was at all possible.

"Sec. 22.  Qualification of Justices and Judges.
Only persons duly authorized to practice law in the courts of this State shall be eligible for election or appointment as a Justice of the Supreme Court, Judge of the Court of Appeals, Judge of the Superior Court, or Judge of District Court."

And, as Judge Barbara Jackson points out in the decision, the "practice of law" in North Carolina involves being a judge: 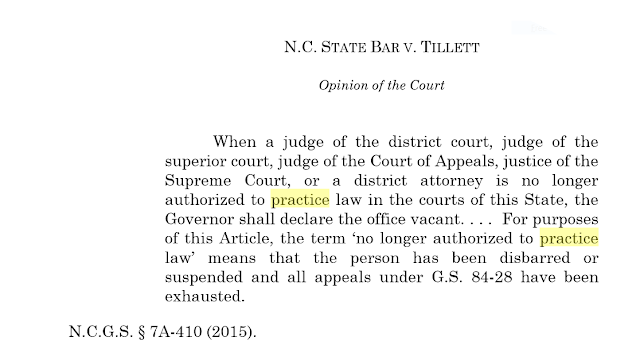 Of course, Judge Jackson's and the statutory definition of the practice of law as being a judge, runs contrary to the claim by the judicial system itself that judges in North Carolina are prohibited to practice law,

which adds even more conceptual mess to Judge Barbara Jackson's convoluted logic in Judge Tillett's case - because the prohibited practice of law was exactly what Judge Tillett was doing when he was trying to pressure police and town officials on behalf of his son.

Thus, since only persons "duly authorized to practice law" can be judges of a certain level in North Carolina, such a constitutional provision must include a provision for removing authorization to practice law for sitting judges.

Yet, that's what North Carolina Supreme Court, themselves judges, and thus, members of class interested in the decision, blocked attorney regulatory authorities from doing in Judge Tillett's case, and, by extension and precedential power, in regards to all other judges in the State of North Carolina.

So, here are some rules about the "practice of law" and judicial practice in the State of North Carolina:

This conceptual mess is not of my doing - it naturally flows from the laws and judicial decisions of North Carolina Supreme Court.

And, here are some more points about procedural history of attorney and judicial regulation in North Carolina, and about Judge Barbara Jackson's dishonest and self-serving decision in Judge Jerry Tillett's case.

FRAMING OF THE QUESTION BEFORE THE COURT

Judge Barbara Jackson claimed that the question before the NC Supreme Court in Judge Tillett's case is:

Yet, the question was not about Judge Tillett's misconduct "while in office".

So, misconduct of Judge Tillett was not "misconduct while in office", but misconduct of Jerry Tillett as a private individual who happened to be a licensed attorney, and who, as such, was clearly subject to the disciplinary jurisdiction of DHC.

By framing the question before the court the way Judge Barbara Jackson did it, Judge Jackson committed judicial misconduct of her own, since she clearly protected a judge who was also a licensed attorney, from a well deserved disbarment, for private conduct as an attorney - for which another judge, Judge Ethelridge, was disbarred, and while Judge Tillett's private misconduct was clearly within jurisdiction of DHC, as that jurisdiction was described by the same judge Jackson in the same Tillett opinion.

THE HISTORY OF ATTORNEY AND JUDICIAL REGULATION IN NORTH CAROLINA

The opinion indicates that: 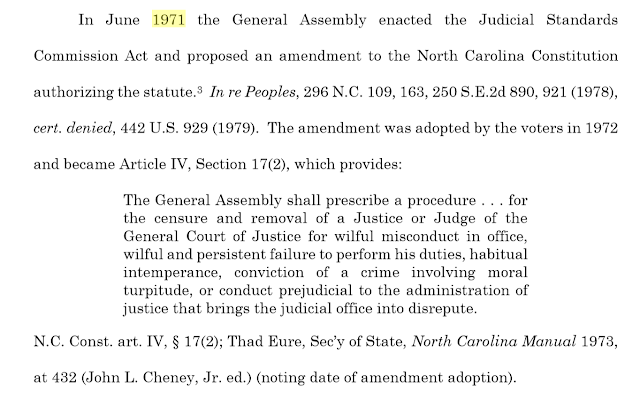 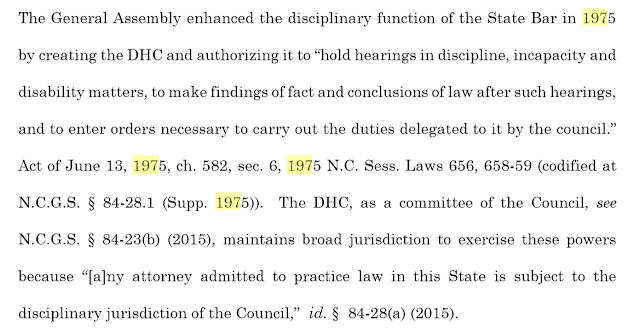 The establishment of the Disciplinary Hearing Commission, with the wording of the statute giving to DHC authority to discipline "any" attorney admitted to practice law in North Carolina, at a later date than the Judicial Standards Commission (JSC), clearly indicated that JSC does not have exclusive jurisdiction to deal with misconduct of judges, and that DHC can deal with regulating of judges as licensed attorneys, based on violation of rules of professional conduct of attorneys.

The two precedents that the North Carolina Supreme Court quoted in its decision: about disbarment of

First, the NC Supreme Court claimed, while referencing these two precedents and distinguishing them on the merits, that they are not mandatory on the court, because they were decision of a lower appellate court, the Court of Appeals, and not of the NC Supreme Court.

Nevertheless, the NC Supreme Court "distinguished" these precedents, even though they are not really distinguishable.

The court said that:

Judge Jackson's mental gymnastics in order to absolve Judge Tillett of attorney discipline despite a clear provision in the statute enacted 3 years after the enactment about judicial disciplinary commission - and, in the same breath, to protect all judges in the State of North Carolina, including herself, from the reach of attorney discipline, while continuing to regulate the "mere mortal" attorneys who are not judges - can be presented in a table:

The table shows that there is no logic whatsoever in Judge Jackson's decision about Judge Tillett:

In both of these instances, Judge Tillett did not act as a judge, but as a private individual, and was clearly subject to jurisdiction of DHC.

Moreover, as Judge Jackson must know as a seasoned attorney and judge, the timing of prosecution is not what is relevant to determine rights of parties - the time of the offense is relevant, and Judge Badgett's misconduct was committed while he was still a judge.

Because of Judge Jackson's convoluted logic, the following rule can be discerned from these three cases, and appears to be now the law in the blessed state of North Carolina:

And, this convoluted logic also explains why, despite the fact that JSC was created because of claims that judges in North Carolina are not disciplined enough (no judges impeached since 1868), the JSC statute is now used by JSC and by the NC Supreme Court, in a self-serving manner, to protect judges committing misconduct, as private individuals, OFF the bench, from disbarment while they are not disciplined by JSC ("public reprimands" do not count as effective discipline -  see the story of Michigan Judge Lisa Gorcyca who received a standing ovation from the local bar after she was publicly reprimanded for egregious conduct, but was allowed to remain on the bench).

But, if the NC Supreme Court allows DHC jurisdiction and discipline after judges leave the bench, for judicial conduct that has led to discipline - and Judge Tillett, just as Judge Badgett before him, was disciplined (public reprimand), just not as severely as Judge Badgett - DHC must be now eagerly waiting the end of term of Judge Jerry Tillett, which ends - ta-da! - in 2018.

Of course, Judge Tillett, to escape disbarment, may run for re-election - but, voters should be forewarned by that time that it is not "public service" that Judge Tillett is seeking by a potential re-election in 2018, but self-protection from disbarment.

And, of cousre, I will eagerly follow, and report, on whether the North Carolina Disciplinary Hearing Council will pursue the discipline of Judge Tillett when he gets off the bench - and into the DHC's open arms.

Posted by Tatiana Neroni at 6:45 PM