Kudoz to Kansas #JudgeEvelynWilson for her bravery. A judge accused of "slandering veterans" for stating the obvious - that the military teaches soldiers how to kill people

Sometimes, the show-off respect to the veterans of the military in this country borders on the bizarre.

We still have homeless veterans - showing that the country DOES NOT respect its veterans appropriately.

We still have teens arranging, and "hundreds" attending indigent veterans' funerals, with press reports about it, while there are no press reports of the same teens and the same "hundreds" helping those veterans not to be alone, and not to die alone while they were still alive.

But, the veteran status is often used to advance political gains, protect people in power from accountability, or raise "politically correct" issues of the day.

For example, it is likely the respect to the veteran PA Judge Ronald Castille (former Philadelphia DA) that prevented him, despite his raging misconduct and "flagrant conflict of interest", from being taken off the bench and disbarred for his "role" in Williams v Pennsylvania, for

A Florida judge recently "agreed" to a reprimand only for his role in advocating for a dangerous and violent criminal, only because he was also a military veteran, just like the judge was.

Yet, in Kansas, an appellate court, while affirming the sentence imposed by a judge, recently blasted a sentencing judge for stating the obvious, when revoking probation and imposing a 68-month (5 years 8 months') sentence against a person where:

The judge considered, in the context of the threat to kill somebody, that the defendant was, in fact, very capable of killing that person because he was professionally trained by the military to kill - which was the truth: 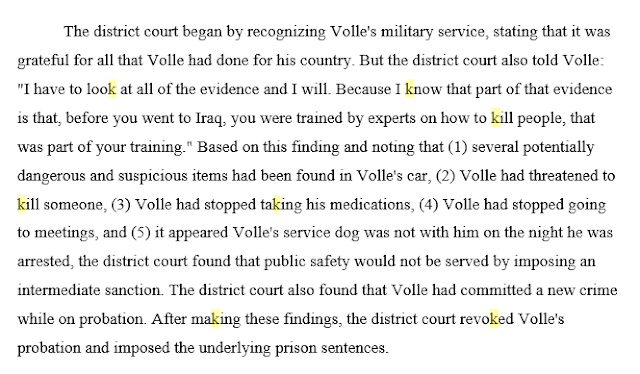 So, that was a military veteran who was given the leniency of probation instead of prison sentence, and who blew it by violating conditions of probation, and engaged in dangerous conduct.

And, somehow the judge was criticized - by an appellate court no less for "unnecessarily slanderous" comment that the court attributed to all those who served in the military.

Yet, what exactly was slanderous?

That our military personnel is not taught how to kill?

What then does the training of our military personnel include?  Crocheting?

In combat, it is "kill or be killed", and soldiers are taught how to survive - yes, by killing people and by defending their country.

But, when they come home, and engage in civilian professions, there is no denying that their skills of how to kill people remain with them.

And, thus, if a military veteran, a person professionally trained to kill in order to defend his country, is trying to use those skills against the public - like this particular military veteran did:

- his military training MUST be considered an aggravating factor, whatever the politically correct crowd says.

Imagine yourself in the place of defendant's victims: his ex-wife and her "family members".

Imagine that your ex-husband, a military veteran who - yes, was trained to kill, and knows how to kill using various weapons - threatened to kill you and your family, and was arrested with a machete in his car, in violation of his conditions of probation.

He did not know of conditions of probation?

He did not know the law does not allow him to threaten to kill people?

He did not know he is not allowed to have weapons in his car?

Of course he did know - otherwise he would have been held in competent to stand trial.

How else should the judge have considered defendant's military experience?

A machete is a dangerous weapon in anybody's hands, and especially so in the hands of a trained soldier - yes, who was trained to kill, not to crochet with it.

What IS slanderous is assuming that all military veterans will turn their skills of how to kill people against their fellow citizens in civilian life and against their family, or former family members, as it happened here.

Let's give veterans their respect where it belongs.

Let's help them get treatment when they need it.

Let's make it so that there are no homeless veterans in this country.

But, let's not allow the veteran status to escape accountability for breaking the law.

Kudoz to Shawnee County District Court Chief Judge Evelyn Wilson for her bravery and her independence in proper application of the law.