More possible reasons for the quick "retirement" of James Eisel, the Chairman of Delaware County (NY) Board of Supervisors


has been subject, for many months up to now, by the FBI, see reports here and here.

Eisel reportedly saw no problem with the sale of a property that the county obtained through a tax lien to Moon's wife.

I wrote about Eisel's and Moon's misconduct in September of 2015, raising the question of corruption and asking for criminal investigation of Eisel (after which article my law license was quickly pulled, without a hearing, based on sanctions imposed by Eisel's friend Becker because I criticized Becker for misconduct in a pleading, asking him to recuse).  I also recently discussed that same retiring crowd recently here.

Allegedly, the subjects of the FBI investigation against Moon now are, among other things:

(1) his pet non-profit that was doing "cleaning", "clerical work" and "summer consulting of youth at the County homeless shelters" - tasks that are now "absorbed" by the county employees (cleaning and clerical work" or cut as unnecessary ("consulting"), and

(2) the fee $5,900 allegedly improperly drawn by Moon in a settled estate matter, which was sent and cashed after Moon retired, and thus Moon was reportedly claiming that, because he cashed the fee after retirement, there was nothing untoward or unethical in him being designated as a fee-drawing executor of an estate of a senior that his agency was supposed to protect.

A social worker, Moon's subordinate, was criminally charged and pled guilty - likely, in exchange for spilling beans on Moon and the crew of his friends.

In the surrogate's court proceeding, claims were made, reportedly, that Massey obtained a will from a senior person under the County's protection "in concert" with somebody else, and, together with that "somebody else", exercised undue influence upon the senior citizen to have her bequeath property to the county.

Since Moon was designated as the Executor of the contested will, the only person likely to be "in concert" with Massey in exerting the influence to bequeath property to the County, and to put him as a fee-drawing executor, was himself.

Exerting influence over vulnerable senior citizens that Delaware County is supposed to protect, not prey upon, is, of course, disgusting and illegal.

Yet, $5,900 appears to be too puny an amount for the FBI to get involved, and especially when just recently, the New York State Comptroller caught the Delaware County, including its Department of Social Services, in multiple improprieties, and in not submitting millions dollars worth of public contracts to public bidding - a practice going back three decades, including the time when Becker, Spinney, Kirkwood and Eisel reigned the roost, with the help of their loyal friend, Delaware County Treasurer Beverly Shields, likely Becker's girlfriend judging by her statements in his 2012 election campaign.

Recently I wrote that Delaware County, in order to stonewall one of my FOIL requests, claimed it does not even have an inventory of equipment it buys with taxpayers' money.  In September 2016, I requested a new audit of Delaware County by the New York State Comptroller, and, if it is not done, I will take other legal steps to ensure that Delaware County does not waste taxpayer money - including my own.

So, while making homeowners in Delaware County hostages by having to pay County taxes for fear of tax foreclosure, Delaware County does not even care to disclose what, and how, it buys and maintains with that money - which is opportunity for corruption on a wide scale, and proof that Beverly Shields should be impeached and removed from office immediately.

Now Bev Shields pretends to claim - to the Walton Reporter - that she "dutifully" checked her records to produce information about when the check for $5,900 was mailed to Moon - while stonewalling disclosure about her other obligations, maintaining the inventory of equipment bought or leased with taxpayer money.

Yet, as to the most recently "retired" Eisel, corruption may have went far further than "just" handing out millions of dollars worth of public contracts without public bidding, or failing to maintain the inventory of equipment bought or leased with public funds.

There was a criminal complaint for assault against Kevin Rinehart, a Harpersfield employee
that was not pursued or was hushed down.

There was a complaint for discrimination filed with the State Division of Human Rights about discrimination by Harpersfield long-time full-time employee Kevin Rinehart against non-unionized worker Luis Ortiz that Eisel did not investigate past asking Rinehart if he "did it" and stopping investigations after Rinehart denied it - necessitating to take the complaint out of his hands and place it in the hands of the State Division of Human Rights.

Moreover, there were claims that Kevin Rinehart was not coming to work when he was supposed to - while being a full-time employee in a lucrative position where his "transfer station" is only opened to the public 26 hours a week.

If Eisel handed out such a lucrative job where a person was not required to come to work, and ignored or hushed down reports of physical assault and discrimination against employees by that absentee person, that smacks of close "friendship" with the top of the Town and County government - including Eisel.

At the same time, giving somebody a job, at taxpayers' expense, that he does not have to come to, smacks of possible corruption, or a payoff for something the absent employees knows about those who give him the job and allow him to do whatever he wants there - not coming to work, assaulting and discriminating against other employees.   Soliciting and having such "absentee jobs" for themselves or their family members is exactly what the two leaders of the New York State Legislature, Sheldon Silver and Dean Skelos were recently convicted for - for federal felonies.

Information on the public finance watchdog site See Through New York shows Rinehart's annual salary for 2016 to be $44,409 - over than $5,000 more that Eisel is quoting. 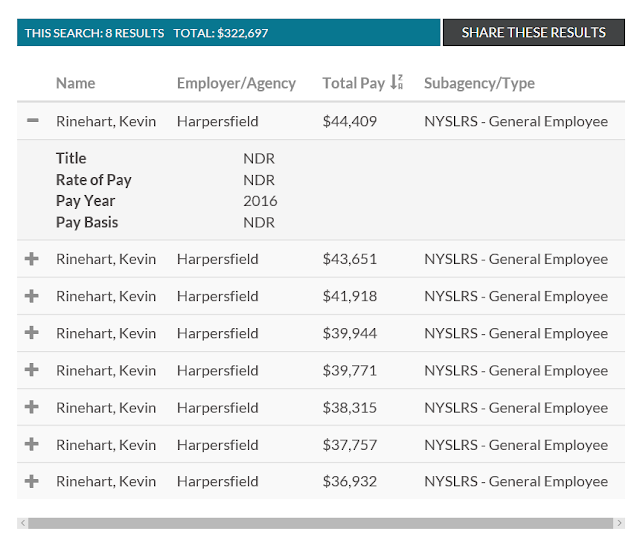 It is obviously high time to dig up and clean up the nest of corruption in Delaware County, and to verify how jobs in Delaware County, and in its townships and villages - the County that does not have an anti-nepotism (hiring relatives of public officials) or anti-cronyism (hiring friends) policy - were being handed out and maintained, for years, at taxpayers' expense.

It is time to show the local public officials that they do not OWN the area - that they are public SERVANTS, and, if they want to claim they SERVE the public, they should do that properly, and honestly, and if they don't - they should be charged and convicted for their crimes, all of their crimes, not just the amounts that they agreed to disclose - like Moon's $5,900, out of millions of dollars that Moon helped give out to his friends and to his own pet non-profit, without public bidding.

I am filing various access-to-records requests with appropriate public agencies about this case, and will publish responses.

I will continue to monitor this case, and will see and report whether Rinehart and/or Eisel will be properly investigated and prosecuted, and whether Luis Ortiz, Gabby Leach and Nora LiSanti, who spoke up against Rinehart at Town Board meetings, will suffer any retaliation by the local government for doing the right thing.