A FOIA request and a demand to turn a case into the federal grand jury was made to U.S. Attorney in SNDY Preet Bharara

In or about October of 2014, I made a complaint to U.S. Attorney for the Southern District of New York Preet Bharara, requesting him to investigate and criminally prosecute New York State Governor Andrew Cuomo and judge Leslie Stein (who is now a justice of New York State Court of Appeals), because Justice Stein decided a case in favor of Andrew Cuomo's subordinate the Department of Environmental Conservation after Andrew Cuomo, during the pendency of an appeal against DEC, after Leslie Stein, as a presiding justice, heard the appeal, but before she decided it, nominated her to the New York State Court of Appeals.

The story about Cuomo bribing Stein with a promotion was published on this blog in 2014.  Since then, I was stripped of my law license, and Stein's court refused to hear my constitutional appeal that it had to hear by statute.

I considered Cuomo's nomination of Stein between the time she heard and decided an appeal by Cuomo subordinate agency, as a bribe to Justice Stein and asked Preet Bharara to investigate the case and prosecute it.

I never heard from Preet Bharara's office after I filed my complaint in 2014.

Today, I filed a FOIA request for the results of the investigation, and for the entire investigative file (2.5 years is more than enough to conclude an investigation where the bribery and the resulting case-fixing was apparent on its face and well documented), and a demand for Preet Bharara, as U.S. Attorney General investigating crimes in the upper echelon of the New York State Government, to turn my complaint for further investigation of the federal grand jury. 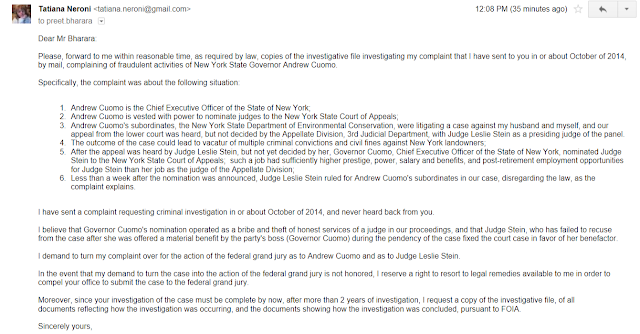 Since the screen scans allow only a very small font, here is the same FOIA request/demand, in a bigger font:

Please, forward to me within reasonable time, as required by law, copies of the investigative file investigating my complaint that I have sent to you in or about October of 2014, by mail, complaining of fraudulent activities of New York State Governor Andrew Cuomo.

Specifically, the complaint was about the following situation:

I have sent a complaint requesting criminal investigation in or about October of 2014, and never heard back from you.

I believe that Governor Cuomo's nomination operated as a bribe and theft of honest services of a judge in our proceedings, and that Judge Stein, who has failed to recuse from the case after she was offered a material benefit by the party's boss (Governor Cuomo) during the pendency of the case fixed the court case in favor of her benefactor.

I demand to turn my complaint over for the action of the federal grand jury as to Andrew Cuomo and as to Judge Leslie Stein.

Whether Preet Bharara completed the investigation or not, whether he did any investigation of my complaint or not, and whether he does or does want to turn the case over for the action of a federal grand jury, existing legal mechanisms give me a standing to file a lawsuit in federal court to compel Preet Bharara to turn the case into the grand jury.

For that reason, I first filed a demand with Preet Bharara to turn the case into the federal grand jury.

If that is not done within a reasonable time, I have a right to sue Preet Bharara, to compel presenting the case to the federal grand jury.

I will publish any responses to my FOIA request/demand.

Stay tuned.
Posted by Tatiana Neroni at 9:49 AM