Texas fights the FDA to get 1,000 vials to kill its 244 death row prisoners - mostly black and Hispanic, likely by torture

In an astonishing move, the Texas indicted Attorney General Ken Paxton sued the FDA for an injunction to force the FDA to permit Texas the import of execution drugs that are not allowed for use in humans.


While sodium thiopental is reportedly used in European countries for legal voluntary euthanasia, there are clear protocols as to dosages and conditions of administration of sodium thiopental for those purposes.

Moreover, autopsies of prisoners executed in the U.S. reportedly showed that concentrations of thiopental sodium in the bloodsteam of executed prisoners were insufficient to cause unconsciousness.

In other words, prisoners who were executed with the use of thiopental sodium, remained conscious and may have been subjected to torturous deaths, in violation of the 8th Amendment of the U.S. Constitution.

The standoff between the FDA and the Texas Department of Criminal Justice (TDCJ) is that TDCJ bought and had shipped 1000 vials of thiopental sodium to execute its condemned prisoners, these people who are mostly black and Hispanic.

Even though the Texas Attorney General tried to keep his lawsuit clinical, and not focus on the actual elephant in the room, the issue that the 1000 vials that the FDA held in detention since July of 2015 and ruled, in a preliminary ruling, that the 1000 vials labeled only as "thiopental sodium" and "for law enforcement purposes" are unapproved and mislabeled new drugs - are meant to kill 258 people.

I copied and analyzed the list of Texas death row inmates, and the "clinically sterile" analysis of Texas AG in his lawsuit seeking opportunity to kill off these people as fast as possible started to appear less than sterile.

Here is the gender and race distribution of people on the Texas death row list:

So, here are racial proportions of populations in Texas as of 2010 Census:

The proportion of Hispanics are 30% (nearly 1/3) higher in the death row inmates than in the general population of Texas (27 constitutes 70% of 37.6).

And, the proportion of whites among the death row inmates is 41% lower (nearly 1/2) of the whites in the general population of Texas.

And, of course, the prosecutor who seeks to kill off Texas' proof of racism in handing out death sentencing, is also white, here is his photo: 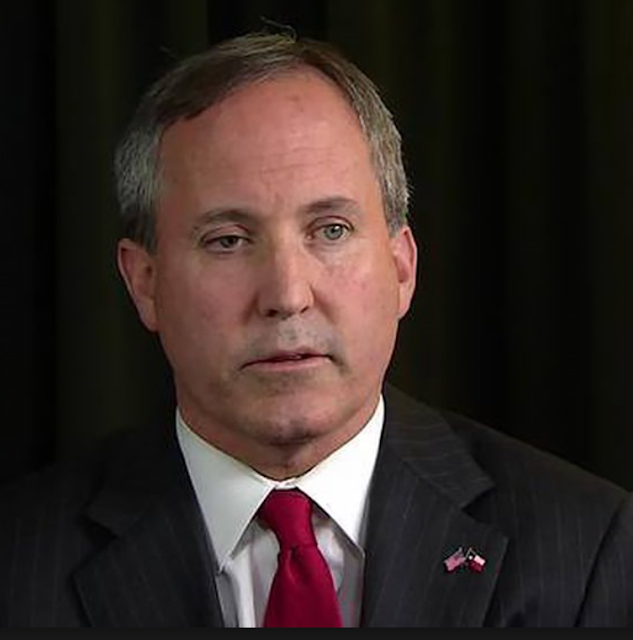 Racism is not the only problem with the Texas death row though.

Yet another problem is sentencing to death, and now trying to kill off, people who, by modern standards of many states, would not be considered mature enough to buy and drink alcohol - a lot of Texas death row inmates are young people between 18 and 21, and a lot are in their 20s.

There are 7 death row inmates in Texas who were condemned to death for committing their crimes at the age of 18: 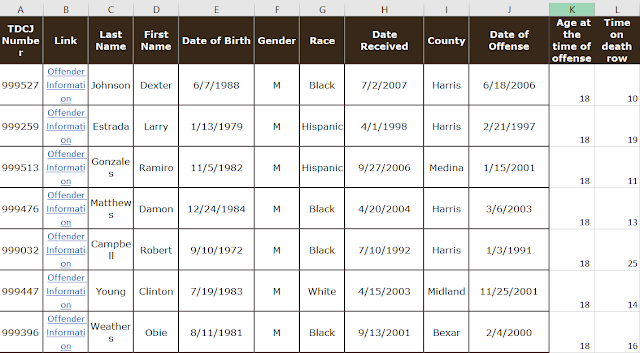 The two far right columns I added to the Texas table.

In many states (New York one of them), people under 21 are not only not allowed to drink alcohol, but are also considered children for purposes of child support.

Note that, out of 7 18-year-old males condemned to death and still on death row in Texas - whom Ken Paxton pushes to kill off fast,

These people, children who committed their crimes at the age of 18, have been on death row from 11 to 24 years by now, and Paxton still pushes to kill them off as fast as possible - before the U.S. Supreme Court comes around and pronounces the death penalty unconstitutional, as it has been done in all other civilized countries in the world.

Out of 15 19-year-old males (at the time of offense) condemned to death and still on death row in Texas:

who already served from 3 to 22 years on death row.

Out of 25 20-year old males (at the time of the offense) on the Texas death row:

The perception that an African American young man is more guilty than a white young man in the same situation is apparently very strong amongst Texas trial juries that must necessarily represent the "cross-section" of the Texas population, in other words, with predominance of white jurors condemning black youths to death 19 times time more (in this age group) than white young men.

who have served so far on death row from 2 months to 41 years;

In the age group 30 to 40 (at the time of the offense) among 61 yet-unexecuted Texas death row inmates there are:

who have so far served on death row from 7 months to 33 years.

Age group of 50 and over at the time of offense - out of 4 death row inmates there are:

Now, when more and more questions arise as to mistakes and fraud of prosecutors who, shielded by "absolute prosecutorial immunity", drum and drum wrongful convictions - including death sentences - in order to climb higher in their careers, often towards judgeships, and when death penalty is abolished in all civilized countries but the U.S.,

Texas managed to get 1,000 vials to kill its 243 predominantly non-white death row inmates, a great number of among them - youngsters condemned to death at the time they are deemed by law not mature enough to buy and consume alcohol, and are considered children for purposes of child support in many states.

Why Texas urgently needs 1,000 vials to kill 243 inmates, while many of these inmates appeals are not yet exhausted, is a mystery that Ken Paxton did not explain in this lawsuit to the federal court.

But, it is clear that, with the recent finding by Lancet that when U.S. jurisdictions execute their condemned prisoners with thiopental sodium, the prisoners remain conscious throughout the execution, and thus are likely submitted to torture - in violation of the 8th Amendment.

Texas did not explain to the federal court,

It is interesting why the white Attorney General (recently indicted for fraud) pushes to kill off the predominantly non-white death row inmates, and what is the urgency for such government killing - other than the government tries to "race to the death chamber" ahead of opponents of the death penalty, and tries to execute people before the death penalty is officially declared unconstitutional, as it should have been done long time ago.

In any event, FDA in this case is in its own right not to allow import of a drug labeled only as "thiopental sodium", "for law enforcement purposes", a labeling that provides no indication whatsoever as to whether Texas is going to use the drug for execution, or for execution/slow torture of its inmates.

While concluding this article, I cannot shake the thought that, 100 years from now, when the death penalty will be, hopefully, long abolished, Ken Paxton's "clinical" plea to the court to stop the FDA from "interfering" with Texas' "lawful law enforcement procedures" will be read as it should be - with astonishment, horror and shame for our past.

Yet, now it is our present.

Which should be made out past - and there are 8 people on the U.S. Supreme Court who can do it any time, but still linger.

Posted by Tatiana Neroni at 1:27 PM