The #JudgeBrendaWeaver saga, Part XI - The Governor of the State of Georgia and his aversion to sunshine in his own office

Just filed an open records request with the Governor of the State of Georgia, and, boy, it was fun - actually, not.

This is the Open Records Request I have filed.

Mr. Deal:
You do not have a subsection in your "required list" of an Open Records Request, so I had to choose something else. This is an open records request. Also, you do not provide the e-mail of the Governor's office, which is a public record, but require me to provide mine.  Please, provide within the period of time required by law, to the above mentioned address and email address, copies of the following public records: e-mail of the Governor's office, e-mail of the Appallachian Circuit court administration,  all records pertaining to nomination and appointment of Mary Elizabeth Priest in 2016 as a judge.

Remember - that was the Mary Elizabeth Priest who Judge Brenda Weaver paid off, by paying her $17,000 from state Judge Bradley's bribery account funded by three counties, and by having her appointed as a judge by the State Governor Deal, in an extremely timely and expeditious manner, while she was still representing the stenographer who apparently cooked both the transcript and the audio, so that these two court "documents" would match and not show racial slurs by Judge Roger Bradley and, according to witnesses, at least two law enforcement officers who were in the courtroom.

Nothing too crooked, not at all.

I received this response to my Open Records Request from the Governor's website:

Yet, I have no way of proving I filed my Open Records Request - because the Governor of the State of Georgia does not seem to be too friendly with Open Records requests.

First, the Governor of the State of Georgia only gives you a mailing address and a telephone number to file your open records requests. 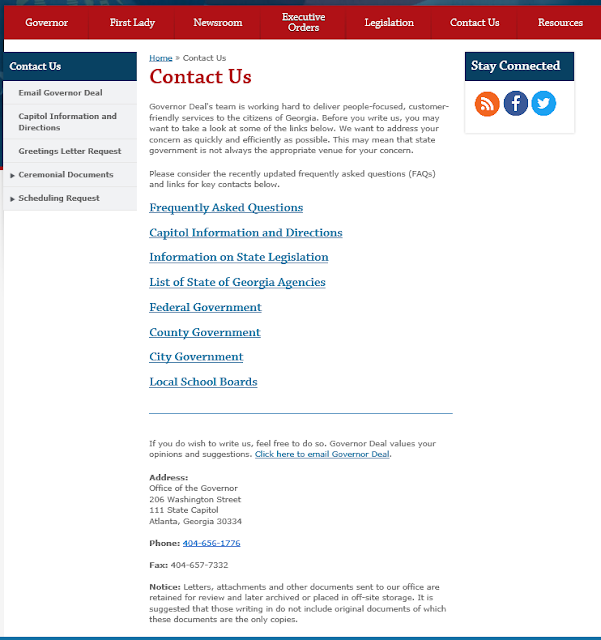 Instead of providing an e-mail address for the quickest Open Record Requests that would leave a record with the requesting party and proof that the request was made, the Governor's website provides a link to a form.

This is a well-known trick of governments to duck Open Records Requests by creating conditions when people cannot provide proof they ever filed an Open Records Request - the ideal proof would be an e-mail, creating an electronic record that the request was sent, with a time-stamp.

Not so.  The Governor for the State of Georgia prefers snail mail or phone calls - the only way of preserving evidence of an oral records request to be filed over the phone would be to record it.

The gentleman who answered the phone at 404-656-1776 in the office of the Governor Nathan Deal of the State of Georgia, after hearing that I want to file an oral Open Records Request (which is allowed under the Georgia law), got off the phone the minimum of 3 times to consult with somebody as to how to deal with me.

He was clearly unprepared to deal with such a request, and at first claimed that that phone number was only for "constituents".

I told him that there was no such restriction on the website.

He then told me that I need to file my Open Records Request with the Office of the State Attorney General.  I said that I wanted to file my request specifically for public records in the Governor's office.

After some off-the-phone consultations he tried to re-route me to another person, but first asked me if I am an individual or an organization - which was irrelevant to the nature of my request.

I honestly told that I am just a private individual.

After some more consultations off the phone, he said that he needs my name, then he will transfer me to the supposed Open Records officer.

I said that I would prefer to give my name to that Open Records officer directly, if that becomes necessary.

Then he consulted off the record once again and came back to me, directing me to file my oral Open Records Request by e-mail, to rbarnes@georgia.gov.

A minute's search showed me that a Roy Barnes was the State of Georgia's Governor from 1999 to 2003.  If the gentlemen at the Governor's office thought it was some kind of cute joke, the joke is entirely on him, since the way the Governor's office acted was a clear violation of the Open Records Act.

This is the form that I was forced to use in the first place when I filed an Open Records Request following the link "email the Governor".

Here is the screenshot of the form that occurs when you follow that link: 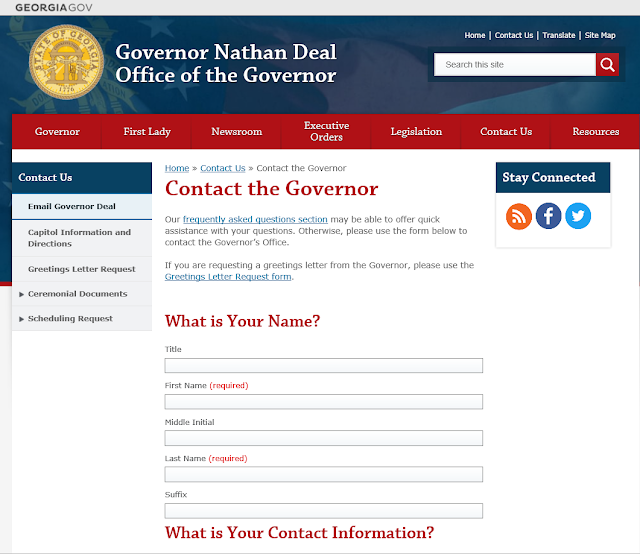 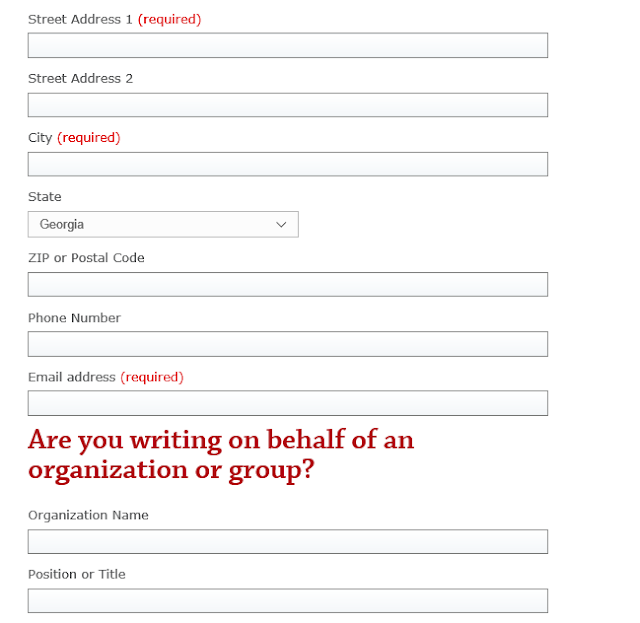 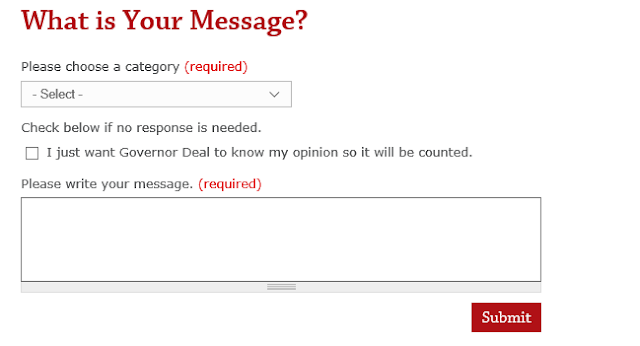 After I sent my Open Records Request this way, this is the only proof that I've sent it that I received (and the window in the "message" was too narrow to preserve in a screen scan my entire Open Record request):

So, there is no proof whatsoever that I have ever filed an Open Records Request - short of my recording of the telephone conversation with the Governor's Office, of course, where the Governor's Office ducked my attempt to file an oral Open Records Request by directing me to the e-mail of the former Governor whose term expired in 2003, 14 years ago.

As I see, your office is very much pro-sunshine.

But, that was not all.

Once again, here is the response from the Governor's office to my online filing.

Here is the "reply to" e-mail address from that e-mail:

Here is my e-mail to that address, copy to the e-mail address that the Governor's office directed me to send my Open Records Request to: 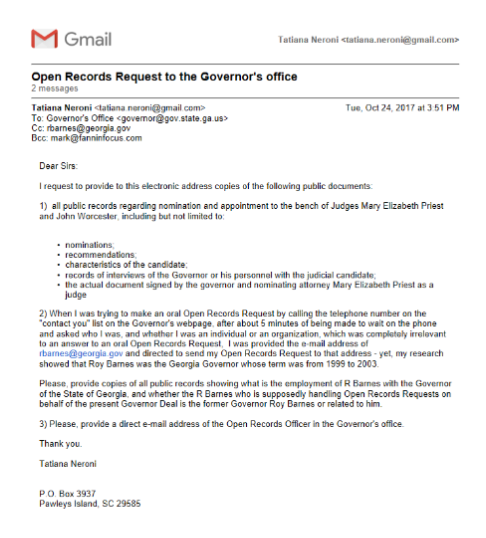 And - here is the instant response from the official "reply-to" Governor's office e-mail address: 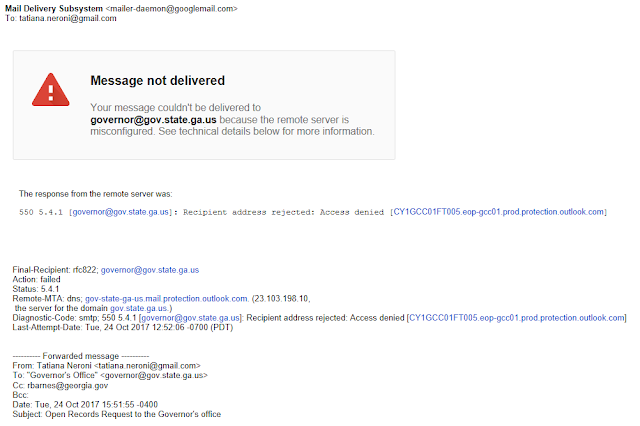 My message could not be delivered because:

So, the Governor's office makes sure that you cannot file an Open Request by any means, and, if you do, you requests will be rejected (as mine was, twice - orally and in an electronic format) and evidence that you ever made them not preserved.
As a result - dear Georgians, enjoy the sunshine - outside, in the very literal sense.  That's enough of sunshine for you.  Sunshine in the government all remained as a fake promise on paper - as Mark Thomason and his attorney Russell Stookey have learned the hard way, see my previous stories of their saga for exercising their right to access public records in the full-of-sunshine State of Georgia, Parts 1 through X in the blog list on the right.

Update as if 18:05 on October 24, 2017: I have got a response from a Rhonda Barnes from the Governor's office who claimed that she will be handling my open records request, and that she has never met former Governor Roy Barnes.  I will take that claim at face value now, give Ms Barnes the benefit of the doubt and wait for production of documents.

I will publish any documents provided to me in response to my open records request to the Governor of the State of Georgia.

Meanwhile, I am finishing review of other documents I recieved in Mark Thomason's case and will shortly start publishing them, too.

Posted by Tatiana Neroni at 1:30 PM