The #JudgeBrendaWeaver saga, Part VIII - another quick forgery, now to whitewash DA Sosebee and save her from liability in a civil rights lawsuit?

Two days ago I ran a blog No. 7 in my new series of blog articles about misconduct of the corrupt judge of the State of Georgia Brenda Weaver, see these articles here:

In Part VII I explained why I consider the indictment against journalist Mark Thomason legally void - because the "true bill"/indictment served upon Mark Thomason was signed by the prosecutor and not by the grand jury's Foreperson, is as required by law.

Guess what - the next day I received a document that pretends to correct that error! 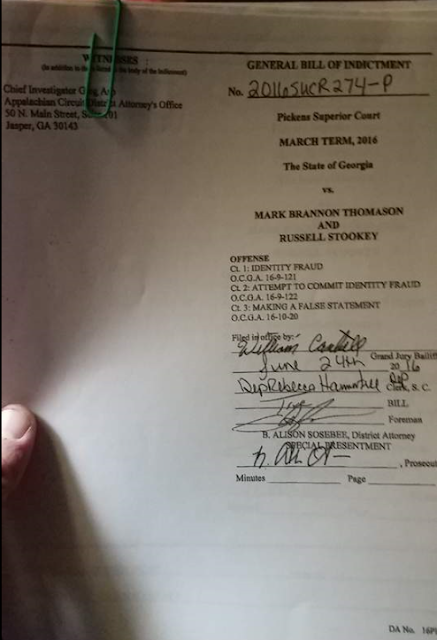 I am certainly publishing this piece of art, but I have no basis whatsoever to believe in its authenticity - or that it somehow corrects the fact that the initial indictment was legally void and subjects DA Sosebee to civil rights liability without immunity.

There are several reasons for that.

This "document" was NEVER served upon Mark Thomason when the indictment/alleged "true bill" was:

This document miraculously emerged the very next day though after I published a blog where I clearly, in so many words, in black and white, claimed that the indictment against Mark Thomason was legally void AND that in that situation Alison Sosebee may be liable in a civil rights action for fabrication of a criminal proceeding without the benefit of prosecutorial immunity - because to usurp the functions of the Grand Jury foreman is nowhere near her prosecutorial duties.

It does not work that way.

An indictment is a document that must be complete on its face, without any additions or supplements.

4. The foreman's name is not stated

The "indictment" includes a "foreman" and a purported signature of that "foreman", but does not state the Foreman's name.

That is not how documents of this importance are to be drafted.

The Foreman's name should have been stated in print, otherwise we do not really know who has signed this document AS "foreman".

5.  The purported document did not originate from a court

The document came from a person claiming to have gotten it reportedly from DA Sosebee.

I have no reason whatsoever to trust that person's integrity, or to believe that that person does not work in concert with DA Sosebee to protect her from a civil rights lawsuit.

Therefore, there is no assurance that this document was ever filed with the court, and we already know that it was never served upon the defendants.

Since DA Sosebee and her surroundings have a material financial interest to forge a document like that after my publication in Part VII about what I believed and still believe to be a fabricated indictment that Sosebee has signed, any document supposedly coming from her office must be checked and double-checked, for authenticity.

And, that is especially so that in the course of this particular story, transcripts were cooked, audios of court proceedings were cooked (and, as I promised before, I will dedicate a separate blog to showing how easily it can be done, on an identical case from another state), court security tapes that were duplicating transcripts and the audio, reportedly disappeared because of suddenly "malfunctioning" equipment -

I know very well that particular trick, the New York State Court administration used it upon me EVERY single time when I asked for court security tapes to verify acts of judicial misconduct, without fail - see, for example, my blog of 3 years ago on the topic, and since then I received multiple tips from other people who received the same claim from court administrations of various states as soon as they would ask for court security tapes that are supposed to show anything "controversial" happening in the courtroom.

So, it appears to be a universal POLICY of court systems across the country that, rather to forge or destroy evidence than let people receive proof of judicial (and prosecutorial) misconduct.

Since court records very definitely were tampered with in this story

- there are witnesses whose accounts of what happened in court regarding the "racial slur" independently verify one another, without witnesses knowing one another, while the statements containing that racial slur were erased from the audio and did not find their way into the court transcript -

it was a piece of cake to forge an addition to an indictment, and especially under the circumstances when a legal blogger clearly pointed out what kind of trouble Sosebee and crew may find themselves in for fabricating the indictment against Thomason and Stookey.

6.  The purported document bears no actual signs it has been filed in court

As it was explained to me by witnesses who did file documents with the courts in the Appalachian Circuit, the court has a filing system as if electronics simply do not exist.

And that is with all the millions of dollars provided for it in the State budget, and with all the hundreds of thousands of dollars (illegally, I believe) provided for the state courts in the County budgets of local counties (not to count the illegal "slush funds" where somehow Judge Weaver's personal Social Security # was involved - it is part of criminal charges that Mark Thomason and Russell Stookey allegedly wanted to access Judge Weaver's PERSONAL information) -

There is, upon information and belief, no system in place where

This easy system that can be set up by a high schooler and which does not really cost that much - somehow, as I understand, eluded the Appalachian Circuit courts.

Instead, what we have is this

Again, I do not know whether this "document" has ever seen the insides of a court file, but what I do NOT see is ANY court stamp - electronic, bar-coding or ink stamp - that would show that this document has been, indeed, filed with the court on June 24, 2016, as it purports to say.

Because of that, and knowing abilities of the Sosebee/Weaver crew to cook court records  (Weaver), or protect those who did it instead of investigating them (Sosebee), one cannot say that this "document" was, indeed, signed on June 24, 2016 - and not yesterday, after reading my blog, Part VII.

In view of the above, I continue to believe that the indictment against Mark Thomason and Russell Stookey was legally void - and that's only based on formal grounds.

There are also a lot of problems with the contents of the indictment - how it purported to charge what was not a crime.

About that - in one of my next blogs in #JudgeBrendaWeaver saga series.

Posted by Tatiana Neroni at 6:04 PM