The #JudgeBrendaWeaver saga, Part VII - The Fraudulent Indictment - Alison Sosebee may have waived absolute prosecutorial immunity for purposes of a civil rights lawsuit

I am continuing to comment on the corrupt actions of Georgia State Judge Brenda Weaver who engaged in vicious persecution of a journalist and an attorney for using the State of Georgia Open Records law and trying to get access to:


For exercising their right to know, as members of the public, Judge Brenda Weaver, wife of a material witness to the court proceeding that triggered journalistic investigation by Mark Thomason, have had Mark Thomason and his attorney Russell Stookey

This is Part VII of the series of blogs about corrupt behavior of Judge Brenda Weaver. 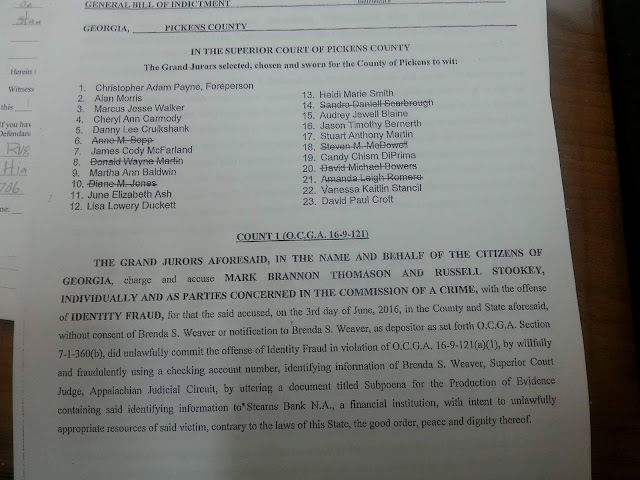 You can read Parts I through VI following the list of blog articles on the right.

I will take the bull by the horns and will go directly into analysis of the indictment against Mark Thomason and why it was unlawful.

Here is the indictment: 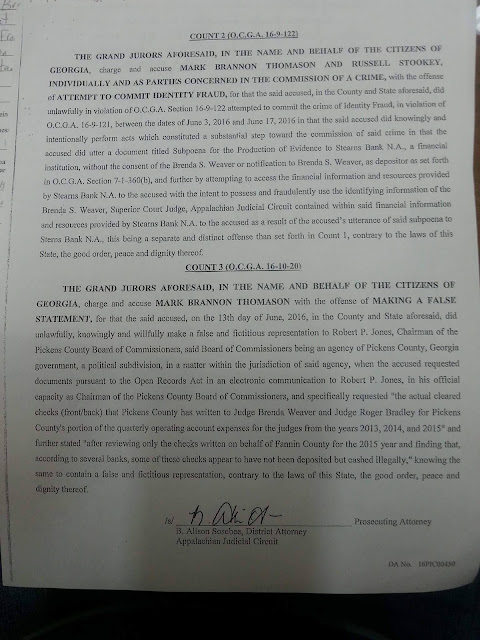 The only positive thing that I see there does not relate to the contents of the indictment, but to the laws of the State of Georgia.

And, that's a shame - because:


There is no reason to fear influence upon or retaliation against the grand jurors any more than against the petite (trial) jurors, and identities of petite jurors are always known.

Additionally, in New York, in many cases, grand jury proceedings are held after the criminal case has already started in a local court, and the defendant, under such circumstances, has a right to a NOTICE from the prosecutor of the pending grand jury proceedings, to be able to appear and testify in front of the grand jury.

If the defendant is to appear and testify and SEE the grand jurors, there is no reason to make their identities secret.

Here, the identity of grand jurors was disclosed to Mark Thomason right in the indictment ("true bill").

Before I go into analyzing potential conflicts of interest among the grand jurors, let me point out right away the main reason why the indictment against Mark Thomason was not valid - a nullity, which, I believe, subjects DA Alison Sosebee to criminal liability and to civil rights liability outside of prosecutorial immunity.

The problem with the indictment, rendering it a nullity, is right here: 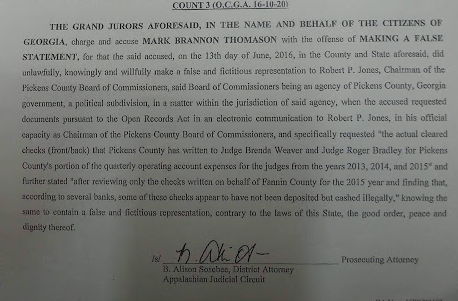 The indictment was signed by the prosecuting attorney, not by the foreperson Christopher Adam Payne.

Yet, in Georgia, same as in New York, the indictment was supposed to be signed by the Foreperson of the Grand Jury, not by a prosecutor.

First, if prosecutors could issue indictments, they would not have had the need for grand jury proceedings.

Second, the 5th Amendment requires prosecution of heinous and infamous crimes (like felony fraud that Mark Thomason was charged with) only based on an indictment by a Grand Jury - not by a prosecutor.

So, this indictment, ladies and gentlemen, is FRAUDULENT.

And, for trying to prosecute upon this indictment, it is Alison Sosebee and not Mark Thomason who should be - not only prosecuted, but disbarred.

And still - the indictment presented to Mark was not a valid indictment, unless there is another document signed by the Foreman of the Grand Jury, Christopher Adam Payne.

Do you think Sosebee did not know she had no right to sign indictments?

Here is an excerpt from a Prosecutor's Council's Grand Jury Manual for District Attorneys of the State of Georgia, as well as the link to the entire Manual:

Not the prosecuting attorney.

So - the indictment, copy of which was given to Mark Thomason, and upon which he was prosecuted, was a nullity.

And, Alison Sosebee, possibly trying hard to earn Brenda Weaver's "trust" for her own judicial rumored judicial nomination, has exposed herself - badly - to a civil rights lawsuit by signing an indictment INSTEAD OF the grand jury Foreperson.

Usurping the authority of the Presiding Officer of the Grand Jury was certainly not a prosecutorial function, and, in my opinion, does not entitle Sosebee to prosecutorial immunity.

So, from the indictment that Mark Thomason was given, it is clear that the Grand Jury DID NOT indict Mark Thomason - Alison Sosebee fraudulently pretended that the grand jury did indict, for which she should be DISBARRED and criminally prosecuted.

For further analysis of the indictment - why it was defective not only because of who signed it, but by its contents, too, and for analysis of potential conflicts of interest in the composition of the grand jury -

Update as of October 11, 2017.  There has been a development after I published this blog - there emerged a document that purports to be another part of the indictment that supposedly have been signed by the grand jury foreman, but was somehow never served upon Mark Thomason.

Why I still continue to believe that this indictment has been fabricated, and to see that "document", read Part VIII of #JudgeBrendaWeaver saga here.

Posted by Tatiana Neroni at 1:26 PM