On the benefits of secret arraignments in New York - Part III. The program has no legitimacy under the current New York State law - and confirmed its secrecy and thus unconstitutionality by not inviting journalists to the ACTUAL arraignments

In my first two blogs on this topic - see Part I and Part II I pointed out that the new little arrangement of the New York State Court Administration, a "pilot program" in response to a settlement in a lawsuit charging that New York State, for 54 freaking years did not comply with the 6th Amendment right to counsel for criminal defendants at arraignments, contrary to the 6th Amendment and the U.S. Supreme Court precedent confirming it - Gideon v Wainright, 332 U.S. 375 (1963).

The "pilot program" was announced, with much fanfare, through a press-release from the New York State Court Administration, and a combined press-conference of the Broome County Sheriff and the Chief Administrative Judge of the 6th Judicial District Molly Fitzgerald.

The problem with this "program" is - that it ENTIRELY lacks legitimacy under the current New York law.


1.  Criminal procedure is bound to statutory and constitutional law, not "arrangements" by court administrations

An arraignment in a criminal proceeding is a creature of statute in New York.  How arraignments are to be held is determined not by courts, but by an entirely different branch of the government - the State Legislature.

And, even though the press release of the New York State Court Administration did feebly mention some "state law" that supports the "pilot program", the "state legislation" in question is no more than a budgetary provision given to the New York State Court Administration to implement measures to satisfy a SETTLEMENT IN A LAWSUIT for violation of indigent defendants' right to counsel.

That is not the same as giving the Judiciary Branch a sudden right to legislate and change Criminal Procedure law, the statutory law of the State of New York, as to when, where and how arraignments in criminal proceedings are to be held.

Illustrative in this respect is the opinion of Judge Veronica Gordon, a Town of Union judge who is not an attorney: 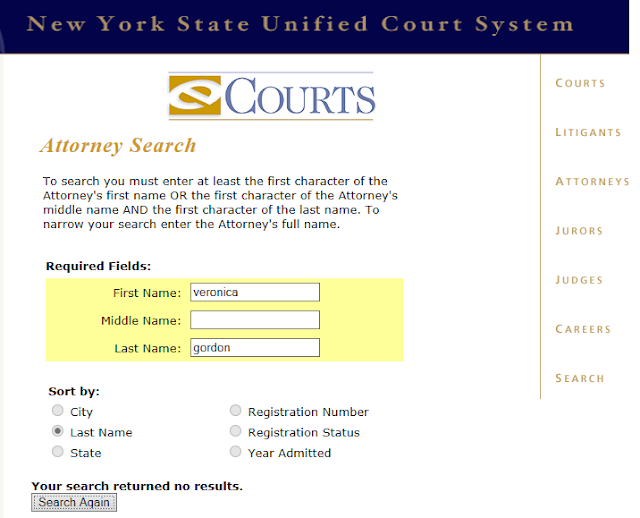 Press & Sun Bulletin out of Binghamton, NY cited the opinion of this clueless judge who hailed arraignments in jail and claimed that it is ok to do arraignments for ALL municipalities within the 6th Judicial District for arrests that happened over the weekends or at night (and you bet, once you heard about the "convenience" and "cost savings", the police will make sure, more, if not all arrests, will be happening this way) - because after that arraignment the cases will be supposedly FARMED OUT (her words, not mine) to the appropriate courts where defendants should have been arraigned in the first place.

In fact, the arraignment cannot happen FIRST some place out of court, right after an arrest of a criminal defendant by the police and THEN "farmed out" to the court of appropriate jurisdiction.

A criminal case in New York, under Article 170 of New York Criminal Procedure Law, in fact has to START in a court of appropriate jurisdiction by FILING in that court of a jurisdictionally sufficient accusatory instrument.

Only then an arrest warrant may be issued BY THAT COURT, and only then the criminal defendant must be brought to an arraignment TO THAT COURT.

In ANY event there is no arraignment without filing of an accusatory instrument.

And, the accusatory instrument is not valid if it is not filed in the appropriate court, not in some jail room.  And, Criminal Procedure Law does not allow arraignments in jail - period.  Does not.  And no judge is allowed to change that - only the Legislature, which did not change Criminal Procedure Law as of yet.

So, this little program is clearly unlawful under the statutory law of the state of New York.

2.  Arraignments must be PUBLIC as a matter of constitutional due process rights of criminal defendants

And, it is very obvious why arraignments in jail are not public and will not be public.

First, in Part I of this blog series, I provided an entire table explaining constitutional problems with this little "arrangement".

As part of that table, I pointed out that jail security rules will create multiple restrictions on the public which will prevent such proceedings from being public proceedings.

And, lo and behold, my theories were confirmed in the flesh, through the reporting of the actual "professional" journalists, on permission from the police and the Court Administration.

Because usually, when an arraignment is happening in a courthouse, journalists come TO THE ACTUAL ARRAIGNMENT.

In this situation, a journalist:

And, the question is - why, if this is a "friendly" journalists allowed into the heart of hearts of the Broome County Jail and who is invited to do the honor of conducting a press conference of Judge Fitzgerald and Sheriff Smolinsky about the event, didn't these nice people allow that same journalist to actually SEE AT LEAST ONE DAMNED ARRAIGNMENT?

How it is actually happening in jail?

How the jail actually accommodates the public to attend that arraignment?

Why-why-why it did not happen?

But - you know the answer, why.

They are MEANT not only as a measure of convenience for the police, judges and prosecutors - but, they are meant, for example:

I put out a legal theory, a legal analysis, because, based on the facts and applicable law, it APPEARS to be bad, but, in my heart of hearts, I hope against hope that it is not THAT BAD.

And I thought - maybe, just maybe, they WILL allow members of the public into those arraignments, conducted at the office of prosecution's witnesses - which is BAD, BAD, BAD already.

But they did not.

They only allowed - even journalists - to see only an empty room.

Only an empty JAIL room, with a locking door.  Positioned as a "courtroom" of an unknown jurisdiction.

Because - if the so-called "free press", the TV station that was allowed to handle the press-conference of the judge and the Sheriff about the "pilot program" was just fed information that, ALLEGEDLY, 14 arraignments were already had under the program, but was not allowed to be actually present at a single one of these arraignments, you can see what chance a garden variety average citizen from the street can have to be present at those arraignments - absolutely none.