How we enable public prosecutors to commit crimes in office - the case of Suffolk County (NY) DA Thomas Spota and his criminal charges - too little, too late

Violation of civil rights is a criminal offense, I found today from the criminal federal indictment of Thomas J. Spota, the just-resigned and now former District Attorney of Suffolk County, New York.

Spota is charged as Count 4 of the indictment as an "accessory after the fact to the deprivation of John Doe's Civil Rights.

Here are the full charges from the docket report of the criminal case against Thomas Spota. 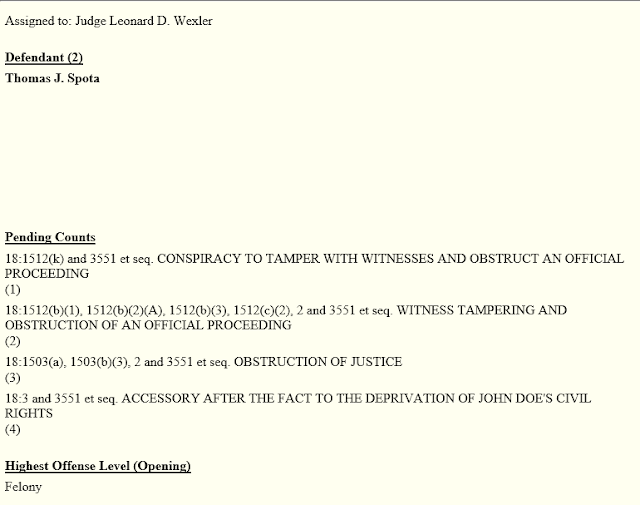 Here is the full indictment against the former DA Spota: 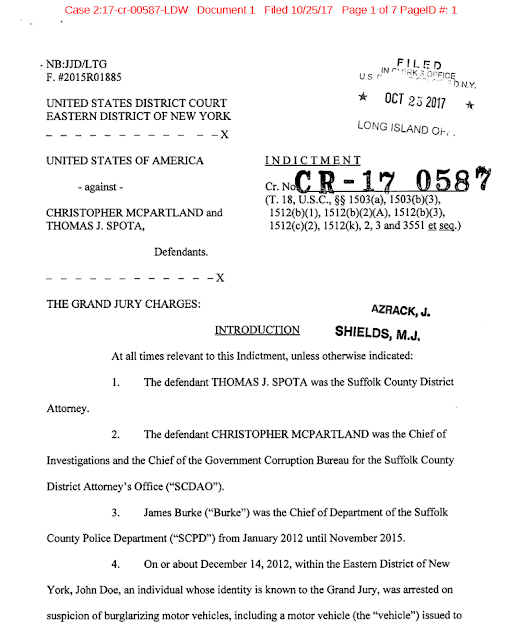 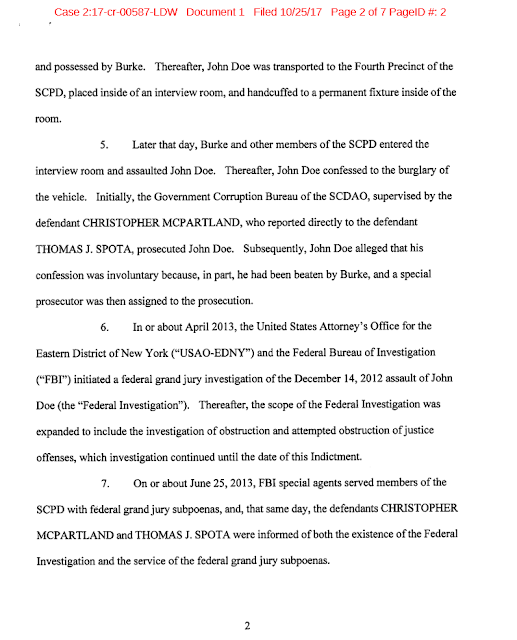 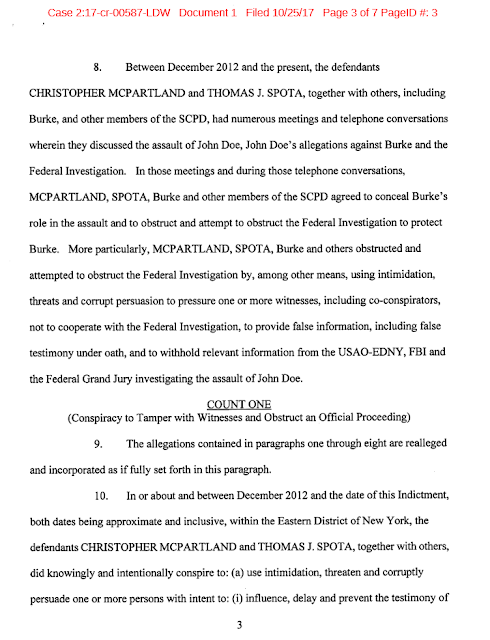 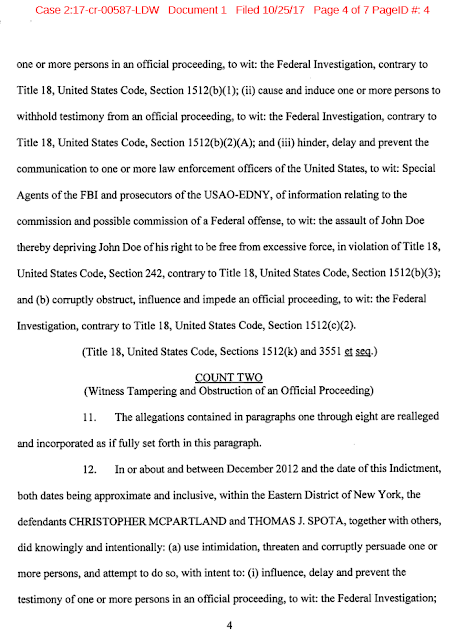 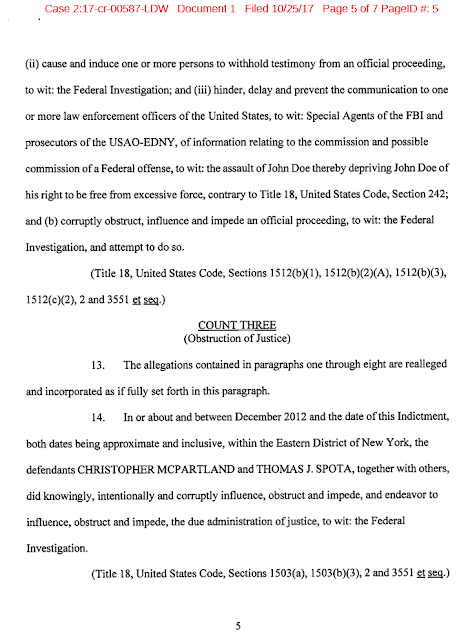 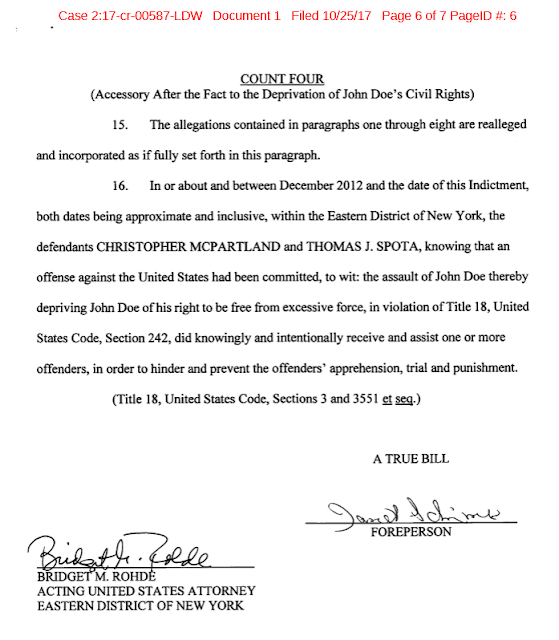 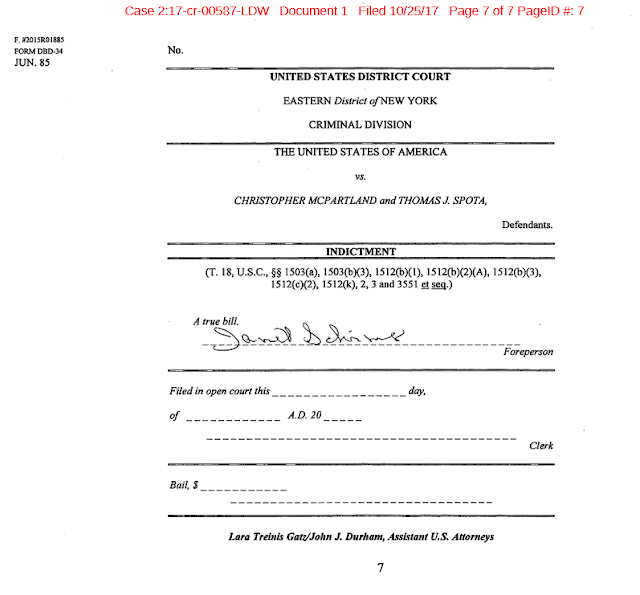 The indictment had more or less vague and conclusory statements of what was it that Spota did wrong.

Yet, as juicy as the indictment against the now-former DA Spota can be, Count 4, accompanied with review of the list of civil rights lawsuits against former DA Spota in the official electronic register of such cases - Pacer.gov, raises a bigger question.

Why wasn't he indicted earlier?

Spota has been sued many, many, many times for violation of civil rights (see below the list of lawsuits against him from Pacer.gov as of yesterday, codes 440 "civil rights", 445 "Americans with Disabilities Civil Rights in Employment", 550 "prisoner petitions - civil rights") - and most of these cases were dismissed, on prosecutorial immunity grounds.

Here is the list of lawsuits against Thomas Spota available on Pacer.gov as of yesterday.  There are 131 cases listed on Pacer against Spota, some of them where he was an attorney, but still, here is the list where codes 440 and 550 - civil rights and prisoner civil rights - repeatedly appear. 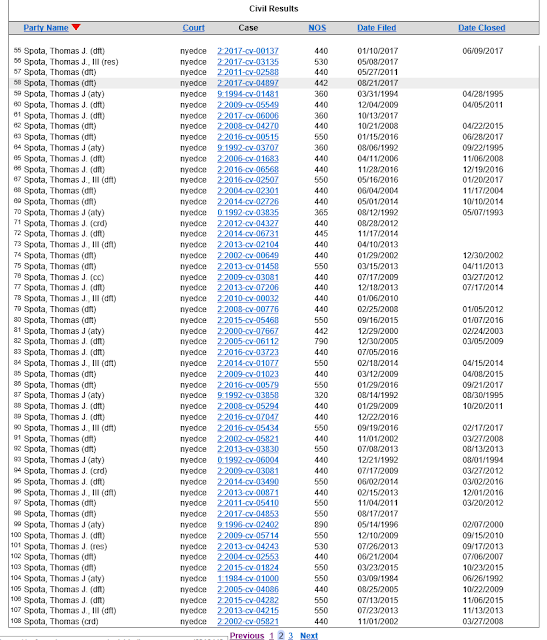 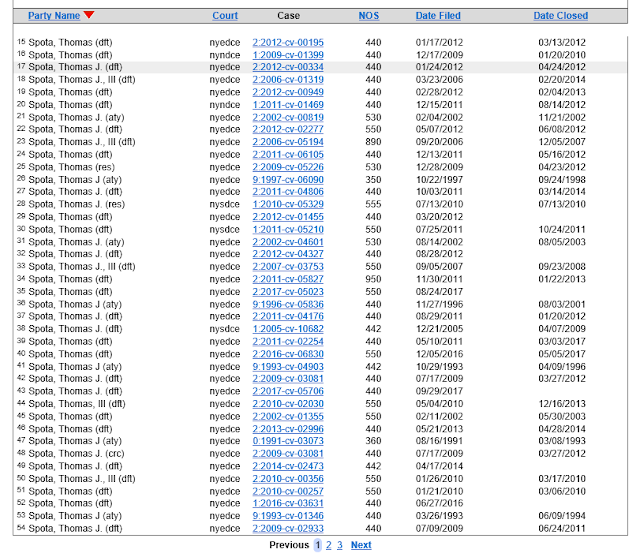 
While I will try, time permitting, to look into what kind of civil rights cases were not dismissed - as usual - on prosecutorial immunity grounds against former DA Spota, the question remains:

why do we, People of the United States, the constitutional source of power in the government, allow our prosecutors to have judicially (and thus illegally) granted prosecutorial immunity for corrupt acts and for violation of the U.S. Constitution?

Why are we asleep at the wheel and allow prosecutors to become bolder in their lawlessness because - as the example of DA Spota shows, he's been sued for years by victims of his criminal behavior, and for years federal courts who are tasked by the U.S. Congress through the Civil Rights Act to protect THE VICTIMS of civil rights violations, protected THE PERPETRATOR, under an illegally - judicially - granted "absolute immunity".

But, the whole idea of usurping the exclusive authority of Congress to legislate and giving immunity to prosecutors, the main source of the judiciary, for CRIMINAL behavior and for oath-breaking?

Why do we enable and encourage prosecutors to commit the FEDERAL CRIME of civil rights violations by protecting them from accountability to their VICTIMS by allowing courts to give them immunity from that CRIMINAL behavior?

Why do we allow the same judges and prosecutors who give themselves (judges) and prosecutors absolute immunity for MALICIOUS and CORRUPT acts authority to block our access to grand jury to prosecute them criminally for that behavior?

You won't be able to access the grand jury without presentation by a prosecutor.

I still remember how I talked to Delaware County (NY) Senior Assistant DA John Hubbard asking him why wouldn't he prosecute then-judge Carl Becker for falsifying court records, filing a falsified certificate of elections going back go 2002 when I pointed out that there is no documentary proof of his legitimacy on file?  It is still there, in that record, falsely certified by Delaware County Board of Elections while underlying documents that could prove or disprove that he was ever elected in 2002 were long gone.

You know what the now-DA Hubbard told me then?  "Tanya, why?  Why are you doing it?  Why do you need to do this?"

You know what the now-DA Hubbard DID NOT tell me at that time?

That he was the freaking LAW PARTNER of Carl Becker before Becker usurped the bench.  That came out only after

After all that, Hubbard ran for a DA himself and now disclosed to the public, in January of 2016, that actually all this time when he was a Senior Assistant District Attorney, his office appeared in front of his own former law partner - without any disclosures in criminal proceedings about that.

Hubbard and Northrup were opponents of my clients in criminal felony cases before Becker for years, they NEVER made a disclosure that Becker is Hubbard's former law partner.

And, both Hubbard and Northrup faithfully locked the doors of the grand jury against prosecutions of themselves, any Delaware County officials known for their corruption, and, of course, their benefactor tossing them victories in criminal cases - former law partner of John Hubbard Carl Becker.

The same way as former DA Spota obviously locked the doors of the grand jury for investigations against himself and the police, and that situation continues until now.

While there is no double jeopardy in charging people for crimes in BOTH state and federal court, the only way former DA Spota was charged was only in federal court.  No state prosecutor dared present a criminal charge against DA Spota to a state grand jury. 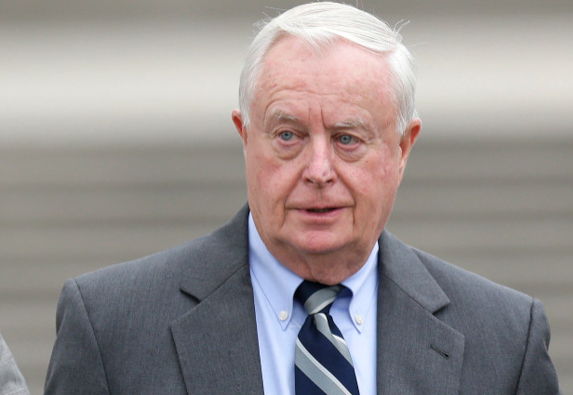 So, he was allowed to violate people's civil rights with immunity for years and decades, so one does look for reasons other than those stated in the indictment for why in reality he was indicted now.

Somebody desperately wanted his powerful seat that he was clinging to?

The whole story is disgusting, but it is time for people across the country to see that nothing good is coming out of prosecutorial immunity and insist that their legislative representatives do their jobs and to have them
Until and unless that is done, cases like DA Spota will be popping up - only when the feds condescend to bring criminal charges against state officials, which happens next to never, and only when there is no way of concealing the garbage any more.

Posted by Tatiana Neroni at 5:41 AM