Time to go to Europe for education and elsewhere for professional jobs, for communism has arrived to the U.S. - colleges are now free. If you are an illegal alien.

These meme has been traveling around Facebook for a while: 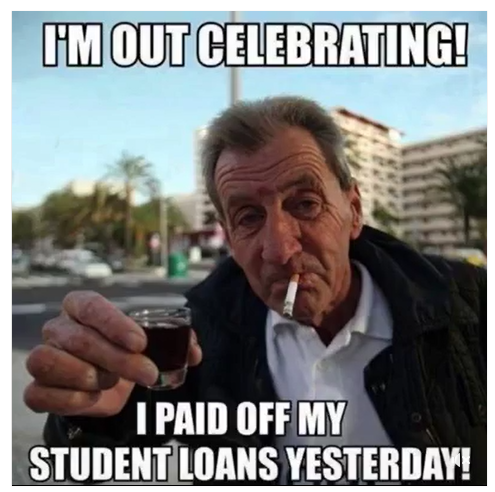 The crisis of student loans in this country is undeniable.

Yet, at the very same time another crisis - the crisis of discrimination against students who are in the U.S. legally in favor of those who have crossed the border and remain in the U.S. illegally, continues.

At first - do you still remember that? - some portion of the U.S. population was euphoric, that was very obvious from social media comments, about President Trump's immigration orders snubbed by federal courts.

It was illegal, as the President was in his own right to enforce federal immigration laws enacted by federal legislature, the people's representatives, but that did not matter much for federal courts who have long usurped the power in this country to MAKE the law on their whim.

States suing the President (in his official capacity, so they are suing every American taxpayer when they are suing the President of the U.S.) were arguing to the federal courts that denying or even slowing down the process of issuing visas to foreign students is the equivalent of denial to the states of an important source of revenue, as foreign students who are coming on legal visas, are usually pay higher tuition than Americans.

At that background, it appears completely bizarre and counter-intuitive when the same states who claim, in one set of lawsuits against President Trump's immigration-related Executive Order, that LEGAL immigrants are important sources of revenues for states - and thus had courts stop the Executive Order, even though financial harm is not a constitutional injury (again, federal courts do not care what the law is, only what will gain them the most publicity, the most free national and international trips from sponsors of anti-Trump campaigns and promotion with the possible next, Democratic - they hope - President), give illegal immigrants a free ride in the same state universities that fleece legal immigrants for higher tuition rates.

Of course, when you are in the country illegally, you most likely have no money because of at least some businesses following the law and refusing to hire you, so you will have "a demonstrated need".

And, with that "demonstrated need", you will be entitled for you know how much, to go to Duke University?  How about $70,092, more than an average American working family gets.

That creates a unique incentive for immigrants to simply go to Mexico, walk across the border and get free medical care, free public education for their children, and now free college education - something that American citizens and legal residents, are not entitled to.

I wonder whether college graduates and current students who are in the country legally will jump up and down with joy on hearing that their tuition and tuition increases, burdening them until old age, making them live at home with their parents to save money and preventing them from marrying, having a house and starting a family is to be used to pay for a free ride of illegal aliens.

In other words, communism has arrived to America, albeit for just one "social group" - illegal aliens.

What Bernie Sanders promised to all Americans, Americans are now forced to pay through taxes, without their consent, for education of illegal alien which they themselves

Oh, and look at this wonderful vignette:  Duke is warning illegal aliens in its financial aid policy that if their immigration status changes, "components of the student's award may also change", too,

the apparent translation into the normal people's English: if you become legal, you will lose money and will have to pay for your education on your own.

The same happened in Emory College, a private university that also just announced a policy of free tuition to illegal alien students, of course, paid for by tuition of students who are American citizens or who have a legal immigration status.

So, what is an American to do?

1) Pretend that s/he is an "undocumented immigrant" in order to get free tuition? Will that be some kind of fraud - figure, pretending that you are an illegal in order to get a financial break from the government that you cannot get as a "legal"?

2) Go to Europe where university tuition is free for all, you only need to pay your living expenses, and waitress your way to a Sorbonne degree?

But, definitely, it is foolish to continue to pay through your nose, through loans that will burden you for life, tuition not only for yourself, but also for illegal aliens who are getting  a free ride at your expense.

It is better to vote with your feet and pay for a college education in another country, not swept yet in this "politically correct" - or, rather, cheap labor advocate craziness.

One thing I can easily predict - a flood of anti-discrimination lawsuits against American colleges and universities for fleecing citizens, legal residents and student visa holders in order to provide a free ride to illegal aliens.

I wonder whether student pussy-hatters who were jumping in the streets protesting BOTH to bring in more legal immigrants to be fleeced for higher-rate college tuition, AND against illegal immigration stings AND against stopping federal aid for illegal aliens, would realize at least now, when they are made, personally, to pay for the free ride of illegal alien students, that they were duped by very adult, very rich, very greedy and cunning people into providing a "mass protest" base for something that is hurting and will themselves and all aspects of their lives, possibly for a lifetime to come.  Badly.

And, "legal" students should also consider that the illegal alien students who obtained college, including an elite college, education for free, will continue to successfully compete with Americans for jobs, unburdened with loans, as "legal" students are, and thus more mobile - and, since they are illegal and may agree to work for lower pay, guess who will start winning all professional jobs in this country, and especially that states started to give out professional licenses to aliens who do not even have permission to work?

Next time before you go out into the street protesting against the "pussy grabber" President (that's the main argument of many protesters), think that the result you are advocating for is stripping yourself of money, property, job and life opportunities.