That disruptive consumer of legal services...

An interesting article was published about "4 impending disruptions" that "legal professionals can't afford to ignore" - giving away the store as to what is what in attorney regulation.

If you remember, regulation of all occupations by the government, and that includes attorney licensing, is done under the pretext of protecting the consumer of legal services. That's why we have attorney monopoly in this country.

Approval of your court representative, through attorney licensing, by the very government that sues you in civil or criminal cases, or who you yourself are suing in civil rights cases is especially precious.

So, here are the 4 "disruptions" that a legal professional cannot afford to ignore, in the opinion of innovator Michael McQueen:


All of these potential "disruptions" speak volumes about why attorney regulation was (or, rather, was not) needed in the first place.

If artificial intelligence is to replace everything in the legal profession - from research to advice to resolving disputes, as it is increasingly happening, why is it so important to regulate the market of legal services, and what exactly is the government regulating that is so important - if machines can easily do the same task that a licensed human is performing.

That question is not asked or answered in the article, automation is simply pointed out as a potential point of "disruption" of a legal professional's monopolistic paradise.

But, what is the most hilarious giveaway is pointing out at "empowered consumers" as a major source of "disruption" of the legal profession.

Once again - attorney licensing exists under the pretense that it PROTECTS CONSUMERS.

At the same time, consumers are not allowed anywhere near that same regulation that is supposedly protecting them:

in other words, consumers of legal services are not allowed anywhere near any meaningful participation in regulation of profession that secures their own access to court, regulation that exists, as it is officially declared, to protect the interests of those same consumers.

So, now what is the "disruption" of the legal profession exactly?

Consumers are raising their heads and, not exactly challenging the absurdity of attorney regulation for their "benefit" that results in majority of consumers not being able to afford a lawyer, or where consumer input or meaningful participation in decision-making, for their own benefits, is not allowed by the regulated profession.

What consumers are doing, according to the article, which is such a bad disruption, is this: 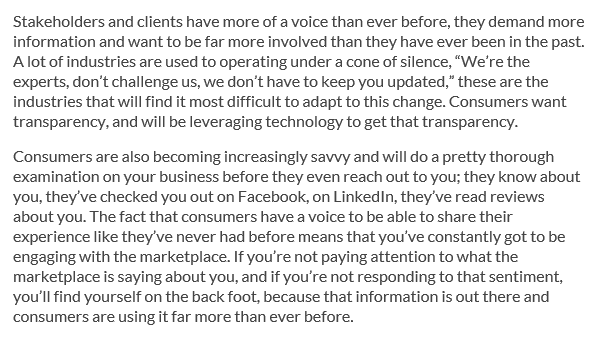 Imagine the gall of these pesky consumers!

Consumers:
Well, wasn't it how it is supposed to be in any market, at any time?

So, consumers making informed decision about hiring, retaining and monitoring performance of providers of legal services is a major source of DISRUPTION?

The next two "disruptions" are no less hilarious.

Disruption No. 3 is "unconventional competitors", whatever that means.

The concept of an "unconventional competitor" in the market of legal services is sticky, and that's very possibly why the "innovator" Michael McQueen prefers not to get into that quicksand completely.

With states, at the same time,
one can only wonder who or what those mysterious "unconventional competitors" can be.

Are those law libraries?

Are those published texts of the law?

Published texts of cases that people can read online for free and do their own legal research?

What is it that Michael McQueen is really telling lawyers about "unconventional competitors"?

How to drown them?

How to attack them in court?

How to harass them, pursue them in criminal UPL prosecutions - ostensibly, to "protect the consumers", but in reality, to protect lawyers' own exclusive turf and captive-consumer markets?

That's why the author resorts to the most general warnings, without identifying those "unconventional competitors" of the legal industry that are one of the 4 major "disruptors"?

What is hilarious is that more and more the legal profession shows considerable shark teeth from underneath their rabbit suit pretending that provision of legal services is not a "business", and UPL laws exist only to protect the consumers.

Why are we talking of "unconventional competitors" as one of the most significant disruptors of the legal professional's market?

And the crown of it all - "emerging generations".

While it is just common sense for any service provider to know his consumer and cater for his needs, advice here goes farther than that.

It is to "engage" the "new generation" by learning how they think, to make them clients or "teammates".

In other words, how to brainwash young potential consumers of legal services better that they buy into the "milking the job" (oops, "billable hours") formula and the paternalistic idea that they are not mature enough to choose their own provider without government approval through licensing - even in the area where the exact same knowledge (legal knowledge) may be obtained by sitting a couple of hours in front of a computer and doing research on the Internet.

So, one thing is clear - the legal profession is afraid, very afraid.

Of its own consumers.

Of having to actually change with times, use their brains, work and depend, like anybody working in the market should, upon market fluctuations and market prices, and to deliver value for consumer's money.

Which is a very good reason for consumers to demand from their legislative representatives to yank the laws on regulation of the legal market or change that regulation in ways to allow consumers to have the decisive vote as to how that market is regulated, and how their own interests are protected, and by whom.

That would be a real disruption of that little captive paradise, which is long overdue.