How Federal Judge Margo K. Brodie cheated an indigent civil rights plaintiff out of his day in court in a case where the defendant was the judge's own former client

It has been enacted by the U.S. Congress.

It gives people who believe that their federal constitutional rights were violated by the government, to file a lawsuit in federal court.

There are federal courts, with judges who are all sworn to protect and uphold the U.S. Constitution - including the Supremacy Clause which considers as the "Supreme Law of the Land" only THREE things:

There is no such thing as "federal common law", "federal case law", "binding precedent" in federal law - and that concerns all decisions of federal courts, including the U.S. Supreme Court.

And, there are federal judges who have a limited power, under Article III, to apply, not to amend or make, federal law.

And, on February 17, 2017, a taxi driver from New York City by the name of Nixon C. Jean Pierre, an indigent person, believing that his constitutional rights were violated by the New York City Taxi and Limousine Commission, has filed a civil rights lawsuit in the U.S. District Court for the Eastern District of New York, Case No. 1:17-cv-00973-MKB-LB.

MKB in the case number means initials of the name of the U.S. District #JudgeMargoKitsyBrodie, a President Obama's nominee, who is apparently a good friend of the U.S. Senator Chuck Schumer. 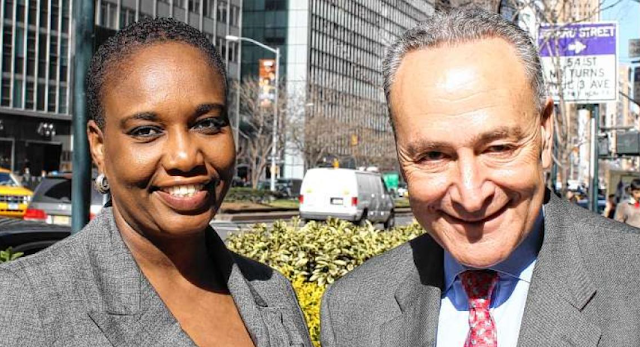 Judge Brodie is a hot commodity among the New York City Bar, and people pay money for a chance to socialize with her.

$25 for a non-member of the New York City Bar Association and $10 for a member. 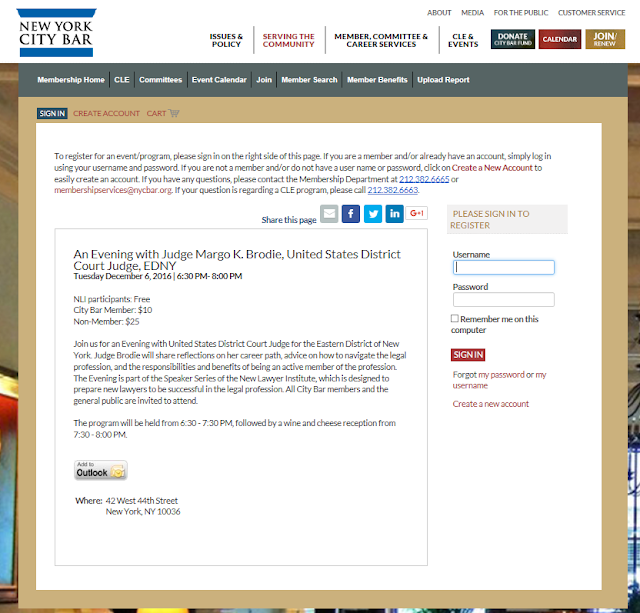 I don't know whether the judge gets a cut from the proceeds of this entertainment, or whether she agrees to selling the chance to talk to her just for a free "wine and cheese reception" and "networking" with rich members of the New York City bar, but it is apparent that people who get to talk to the judge in person may have an advantage to discuss with her, out of court, their cases - and that is a huge appearance of impropriety.

Moreover, when a judge agrees to a bar association selling tickets to her appearances, it clearly appears that that bar association has an influence upon the judge and that members of this association may have a preferential treatment for the judge, bought with free dinners or cuts from the proceeds from an "evening with a judge" - in other words, it smacks of court corruption.

I do not know whether attorneys for the New York City Taxi and Limousine Commission were there and sponsoring the "wine and cheese" reception for the judge.

Yet, I do know though that Judge Brodie actually worked as an attorney for the New York City Legal Department, so the defendant in this case was the judge's own former client.

She did not make a disclosure about that to the plaintiff, of course.

Yet, I do know what the judge did to the indigent civil rights plaintiff Nixon C. Jean Pierre's case:  on April 19, 2017 she dismissed it.

And, not only she dismissed it, but she "certified" that an appeal from her own decision will be frivolous.

So, as far as I have seen the record, Nixon C. Jean Pierre did not appeal, and his time to do that has lapsed, so he is without a remedy now.

But, what is the most troubling about Judge Brodie's dismissal of a poor person's claim of constitutional violations in how his taxi driver license and livelihood were revoked by the New York City Taxi and Limousine Commission (and taxi drivers in NYC are nearly predominantly immigrants - but somehow I did not see ACLU lawyers or any other pro bono lawyers breaking Nixon C. Jean Pierre's doors to represent him in court) - what was the reason judge Brodie dismissed the case.

The reason was simple - Judge Brodie claimed that Mr. Nixon C. Jean Pierre has knocked on the wrong door, he filed a lawsuit in the wrong court, he should have proceeded in a state court through what is called an "Article 78 proceedings", which would have provided enough "due process" for him.

But, didn't the U.S. Congress, when enacting the Civil Rights Act, 42 U.S.C. 1983, give the right to choose the forum to civil rights plaintiffs - to Nixon C. Jean Pierre here?

And, isn't it true that the Civil Rights Act, 42 U.S.C. 1983, does not have in its text a condition that a potential civil rights plaintiff must go through state court proceedings to litigate a constitutional violation if such proceedings are available, and not through a federal court?

And, isn't it true that under Article III of the U.S. Constitution - which Judge Brodie took an oath to uphold and protect - Judge Brodie does not have legislative powers to change that statute?

These questions are not rhetorical.

Answers to them are:

The U.S. Congress gave the plaintiff - and nobody else - to choose the forum where he would litigate violations of the U.S. Constitution.

The U.S. Congress did not require civil rights plaintiff to use state court procedures to litigate their federal constitutional claims.

And, the U.S. Constitution does not give legislative power to federal courts, so Judge Brodie was without authority to teach the indigent civil rights plaintiff Nixon C. Jean Pierre that he should have used New York State Article 78 procedure to litigate his federal constitutional claims - deprivation of his right to earn a living in his chosen profession, revocation of his taxi driver's license by the New York City Taxi and Limousine Commission.

And, since there is no real accountability of federal judges in this country, Judge Brodie, after attending the free "wine and cheese reception" sponsored by the New York City Bar Association where New York City attorneys, I am sure, are prominent members, and thus sponsors, felt free to do what she, or those who sponsor her - wanted to do, dismiss the case.

So, first of all, it was completely unlawful for Judge Brodie to dismiss a federal constitutional civil rights lawsuit of a poor person because he did not pursue federal constitutional claims through a state Article 78 procedure, and it was not Judge Brodie's business why Nixon C. Jean Pierre chose the federal court and not the state court for his civil rights litigation - the law allowed him that choice, and the judge was without power to change that.

But, when Judge Brodie disdainfully told a poor person that he would have had enough "process" in an Article 78 proceedings in pursuing federal constitutional claims, and dismissed his federal lawsuit because he chose to follow the law the way the U.S. Congress allowed him, she was not even right in that - which raises not only issues of integrity of this judge, but also issues of competency.

Here is a table I have put together, pointing out just some differences between an Article 78 proceedings in New York state court and a civil rights action in federal court.

So, a well educated judge, and the former attorney for the defendant in this case, without disclosure of her conflict of interest, and after an "evening with a judge" where the judge allowed the New York City Bar Association (where the defendant's counsel, I am sure, are members), to sell the opportunity to socialize with herself - cheated a poor taxi driver deprived of her livelihood out of his day in court, and certified that his appeal will be frivolous, chilling him from even considering such an appeal.

No ACLU is fighting for this guy, who is poor and not politically connected.

Because - Constitution, prostitution, who really cares?

Posted by Tatiana Neroni at 1:11 PM