If you want to get employed in Cooperstown, NY, you'd better be an illegal alien - and share the fruits of your labor with the local establsihment, or else

The village of Cooperstown, NY, without a public vote, suddenly announced itself a "sanctuary" municipality - which cannot be done without a public meeting and a public notice and discussion.  No discussion has been held, according to a press account, so the legality of that decision is questionable.

Of course, it is a "lost in the woods" municipality, so, supposedly, why would it even consider announcing itself a "sanctuary" for illegal aliens?

The answer can be not further than the luxury lakeside resort located in Cooperstown, NY, the Otesaga Hotel,

which needs to fill in its jobs, and illegal aliens, of course, is the cheapest possible solution to clean hotel rooms and do maintenance, wash dishes and laundry and work as line cooks and waiters.

This lakeside resort, "coincidentally", is well-known for holding conferences for state and federal judges and prosecutors, see e.g.:

here - a "Prosecutor's Training Institute" could not possibly train prosecutors without inviting a Judge of the Court of Appeals to talk about something completely unrelated to the topic of the discussion, and to do that in Cooperstown, where the only place to accommodate a mass of people is Otesaga Resort Hotel: 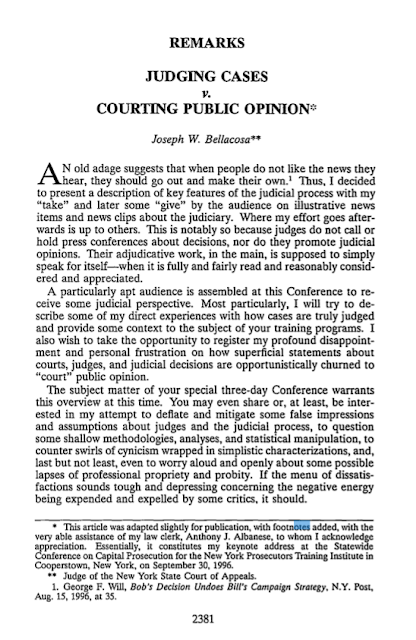 and here, an annual conference of federal bankruptcy judges was to be held here in 2015 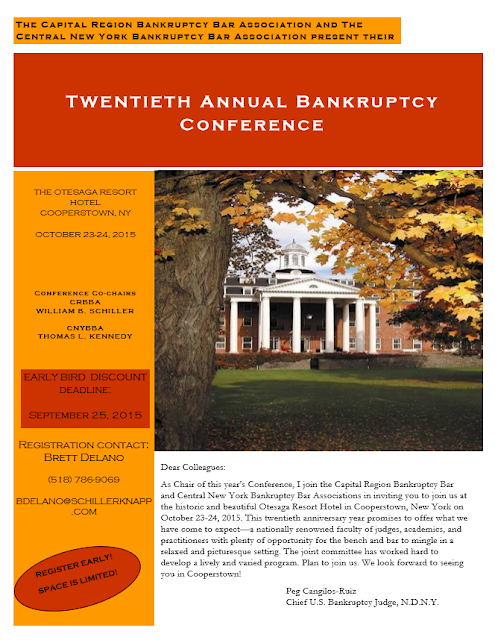 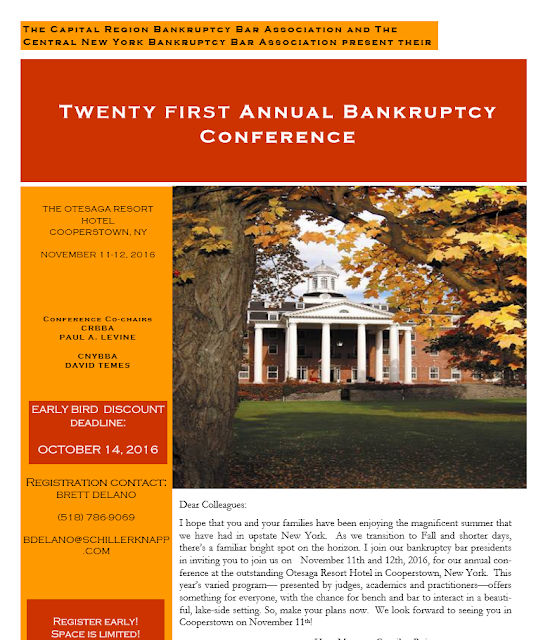 and here, a lawyer from a large law firm announces a "speaking engagement" in Otesaga, to happen tomorrow:

Moreover, Cooperstown, as far as I know, is the home of the Chief Administrative Judge for Upstate New York Michael Coccoma, so he can be on hand in any of these events, enjoying free golfing, tennis and "networking", especially in view of the fact that he is close to mandatory retirement and will need a law firm to pick him up after that.

So, when judges need to get drunk and play golf on the lake, federal laws they are sworn to protect may be disregarded.

It is apparent that this pronouncement of a "sanctuary village" has anything to do with caring about anybody's human rights.

It's the bottom line for the hotel and keeping drunk lakeside binges affordable for judges.

Just visit the hotel's restaurant and see for yourself how many immigrants are employed in the hotel.

Given the "sanctuary village" status the village of Cooperstown now has, right before the start of the Otesaga resort season, consider how many of them may likely be illegal alien, taking jobs right out of the hands of American citizens and legal aliens in this economically depressed area.

Lawful resident and citizen parents appearing in Otsego County Family Court to whom judges try to impute income or order to find a job in that neck of woods, or go to jail for contempt of court, should point out to the judges the employment preference the village of Cooperstown just implicitly announced for illegal aliens - obviously, catering for employment preferences of its three major employers:

Once can also recall with what vigor the local notorious District Attorney (and drunk) John Muehl pursues people for trying to make at least some kind of a living - having signed a private contract to persecute, ON BEHALF OF THE FEDERAL GOVERNMENT, by the way,  paying his office over $91,000 to wage a war on poor parents and parents of special needs children trying to make ends meet.

One would wonder what would happen to that contract, will the DA's office and the Village of Cooperstown now turn down this kind of money to prosecute federal fraud - or they snub the federal government only in enforcement of immigration law for some interesting reason, not other federal laws?

Obviously, the distinction is that the poor parent was earning money for herself on Etsy, without "sharing" the fruits of her labor with any of the rich local employers, that's why DA Muehl undertook to prosecute her, for money.

Had she been an illegal alien, she would have been welcome to Cooperstown with open arms - because then the local rich employers could exploit her cheap labor.

With such "preferences", of course, legal residents and citizens in this area has a zilch of a chance to get employment.

So, when you come to Cooperstown, NY, remember how filthy their local politics is.

They just jumped on the nationwide bandwagon to snub at the new President in order to keep robbing legal residents and citizens of their jobs and get rich off illegal alien labor.

Posted by Tatiana Neroni at 9:10 AM