This is my third blog about NWIRP's lawsuit against Jeff Sessions portrayed in some media as a heroic deed.

The media, while hailing as good anything that is against Trump or officers in his administration, omitted to mention that the rule that NWIRP's lawsuit is attacking was introduced and enforced by the Obama administration in 2008.

In its pleadings, NWIRP has written to the court that in represented cases clients fare better (4 to 5 times better, based on the outcomes) than unrepresented clients.

Yet, NWIRP is asserting their "constitutional right" to throw in for unsophisticated immigrant clients, often for those who do not know English, a sophisticated pleading (a petition or a motion), as a ghost-writer for a pro se respondent in an immigration proceedings, and then leave that same client to litigate what they threw in, on his own.

And, NWIRP asserts that they are actually providing their clients a benefit.

Let us model this on a hypothetical.

Imagine that a lawyer has a budget of over 6 MILLION DOLLARS - that's what NWIRP had in 2014 (the latest publicly available report). 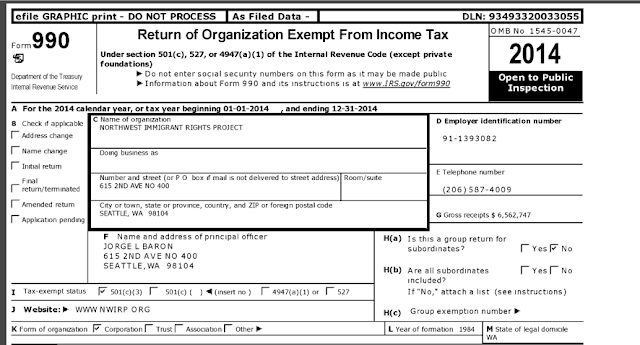 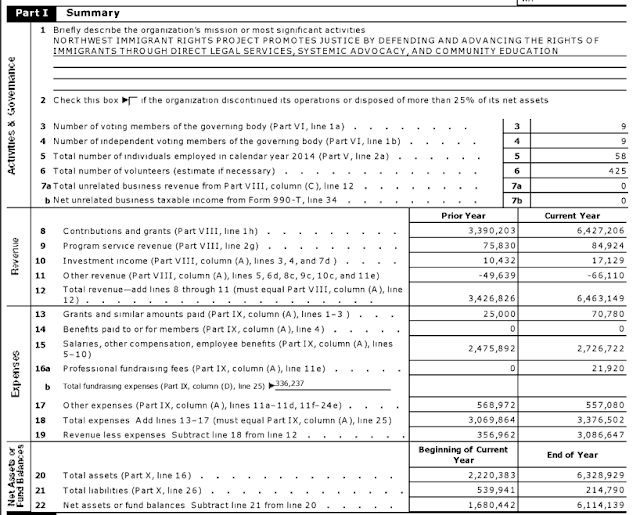 Imagine that a lawyer is reviewing a case of ONE client - because a lawyer must have an undivided loyalty to every single client.

Is a budget of 6 million dollars enough to represent, from first to last day of immigration proceedings, ONE client?

Do NWIRP attorneys have any right (much less, a constitutional right), to instead emulate Jesus Christ and try to feed 5 000 men with 5 loaves of bread?

Because that's what NWIRP are trying to assert as their own right - and somehow as the right of their clients and potential clients.

They are claiming to the court in their lawsuit that:

Of course, if they just represent 100 clients from first to last day, and win all of these 100 cases, that will not be as impressive as saying that they "helped" by (ghost or partial) representation 10,000 people, as NWIRP is asserting in their lawsuit.

Now imagine an assigned attorney telling his client - I will only throw in one motion, and then you are on your own.

No court will allow that.

The court where they are suing will not allow NWIRP's own attorneys to get out of the case without the court's permission, and NWIRP knows that.

Immigration courts will not allow that either, there is nothing new about it.

In court proceedings in the blessed State of Washington (whose AG supported the NWIRP lawsuit through an amicus brief) withdrawal of an attorney over objection of a single party is prohibited without a court order - so, if a client objects, an attorney who is in the case, cannot withdraw without court's permission.

Probably, not, but the constitutional right violated here is not the attorney's 1st Amendment rights, for sure.

It is the attorney's 13th Amendment right not to be ordered by the government into an unpaid servitude - and the 13th Amendment violation was, certainly, NOT asserted by NWIRP, because asserting that would clearly highlight that the attorney's "right" to ghost-write conflicts with the client's right for representation throughout the proceedings.

And that's what NWIRP is fighting - they are fighting AGAINST their clients' right to have NWIRP represent them once they step into an immigration case, as required by disciplinary rules of that court, until the successful or bitter end.

By the way, NWIRP practically lied to the court by manipulating the court with the statistics of outcomes of represented vs unrepresented parties in immigration proceedings, because those statistics were inapplicable to what NWIRP is doing.

NWIRP did not provide ANY statistics as to outcomes of its clients for whom they provided one consultation, ghost-wrote (possibly, by non-attorney illegal "advocates") one petition or one motion, and then let those clients hang out to dry on their own.

Since NWIRP asserts in the lawsuit their "constitutional right" NOT to represent their clients from the first to the last day of the immigration proceedings, statistics that NWIRP used for court comparing outcomes in represented vs unrepresented proceedings, is inapplicable - and was fraudulent to use in court (my personal opinion) in order to impress the court.

Why did NWIRP even file this obviously frivolous lawsuit?

The answer is clear - enforcement of the 2008 rule hurts their fundraising efforts.

As I mentioned above, it gives NWIRP, and their lawyers, more glory and more grounds for self-promotion to claim that they "helped" 10,000 people (without giving the statistics of outcomes for those 10,000 people and while claiming that identities of those 10,000 are secret - so there is no way to verify their claims that they actually helped those 10,000 people) than to openly, and following the immigration court rules, help, from the first to the last day of immigration proceedings, a much smaller number of people, but to actually help them by representation, not by bits-and-pieces consultations, ghost-writing and then USING those unnamed people in their further fundraising campaigns.

I will continue my analysis of the NWIRP's lawsuit.

Posted by Tatiana Neroni at 7:30 AM