Will Richard Harlem NOW be disbarred for fraud upon the court? A stunning sworn confession of a Mokay plaintiff, Daniel Mokay

Today I received a stunning piece of evidence that undermines the Mokay v. Mokay lawsuit. 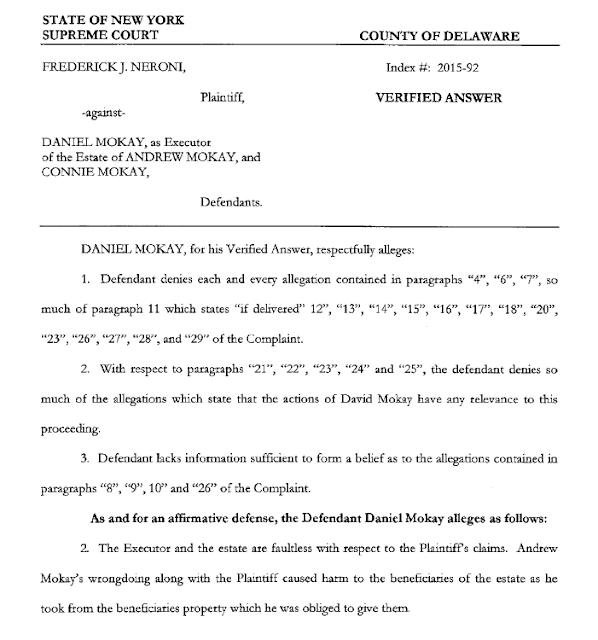 What I found amazing is the first affirmative defense, paragraph 2 at the bottom:

Even more interesting is that the Verified Answer was verified by Zelda R. Smith, legal assistant to Richard Harlem, on May 6, 2015: 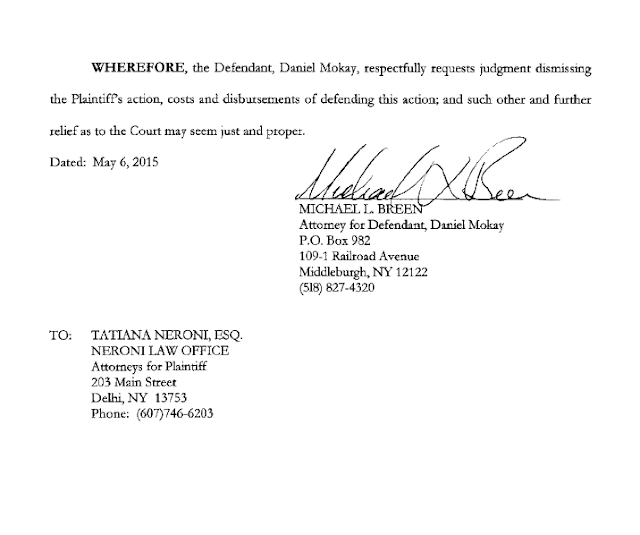 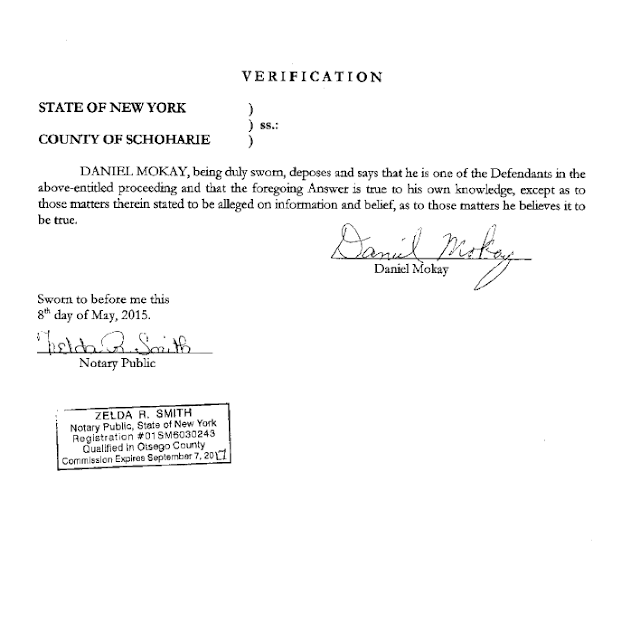 Of course, Daniel Mokay is not a "Defendant" in his individual capacity in this lawsuit, he was brought into the lawsuit only as Executor for the Estate of decedent, and there is no way to sue the decedent for contribution other than through suing his Estate. 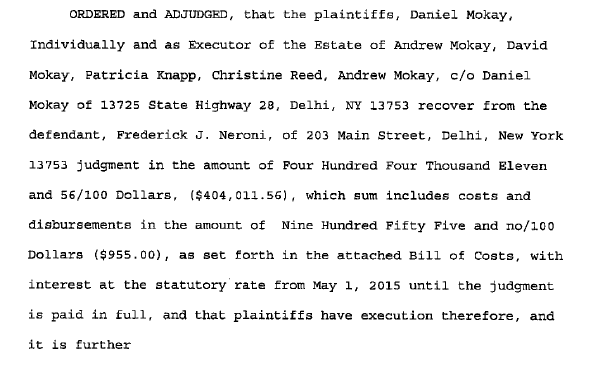 I say "fraudulently" because the Estate could not possibly incur the same amount of legal fees (claimed as damages) as the other five plaintiffs in the action, for the simple reason that the Estate was not a party to the Mokay action from June 2007 (the commencement of the Mokay action) to March 2008.

Moreover, on May 4, 2015 Daniel Mokay made yet another sworn statement in his verified response to my husband's petition to stay distribution in the Estate of Andrew Mokay due to Mr. Neroni's action for contribution against the decedent: 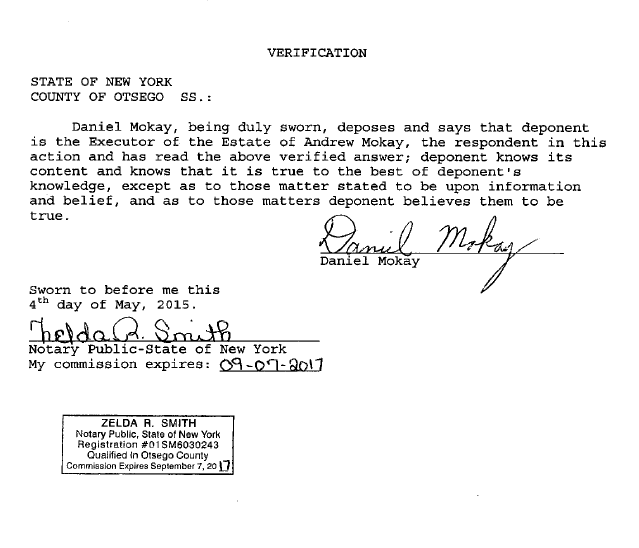 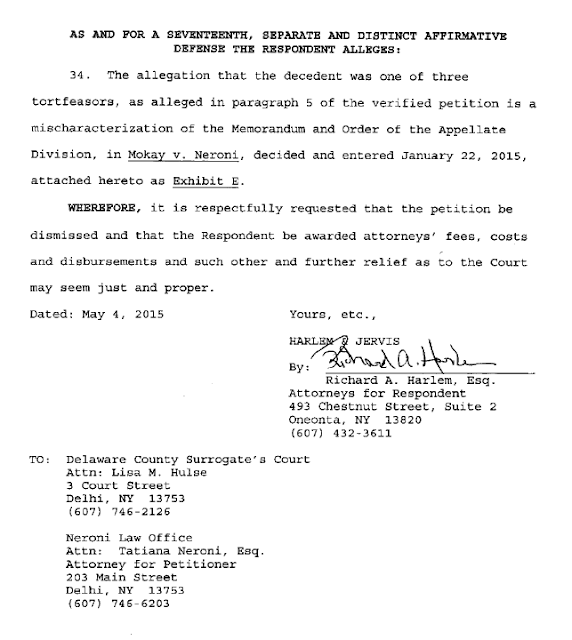 This is the statement from the January 22, 2015 decision that Mr. Neroni (and I as his counsel) allegedly misinterpreted:

So, on May 4, 2015 Daniel Mokay made a sworn statement that Mr. Neroni "misinterpreted" the statement in the decision of the Appellate Division 3rd Department clearly describing three people to be part of the alleged conspiracy to commit fraud in the Mokay action, one of them clearly being the decedent:

Yet, on May 6, 2015, through his other attorney Michael Breen, in another action, Daniel Mokay makes a diametrically opposite sworn statement, that it is the decedent's actions, together with the alleged actions of Mr. Neroni that "caused harm to the beneficiaries of the estate", and Daniel Mokay even specified what kind of harm he is accusing his own decedent (and father off) - that his father "took from the beneficiaries property which he was obliged to give them".

In other words, Daniel Mokay both accuses his own father (whose legal representative Daniel Mokay is, as the Executor of his Estate) of stealing property, but he also asserts that the Mokay action was an action for interference with prospective rights of inheritance of the Estate's beneficiaries - a non-existent cause of action in New York.

Also, when Daniel Mokay states that "the Executor and the estate are faultless with respect to the Plaintiff's claims", Daniel Mokay (and his attorney) apparently pretend they do not understand that the Plaintiff has no other way of bringing a contribution action against the deceased but to sue his estate - that is the legal way of how it is done in the State of New York.

So, on May 4, 2015 Daniel Mokay claimed, under oath, in two actions (Mokay and petition-to-stay-distribution) that the decedent did not commit any wrongdoings and was not a tortfeasor in the Mokay action.

Two days later, on May 6, 2015, Daniel Mokay claimed in a third action, also under oath, and without notifying the other two courts of his sudden change of heart, that the decedent did, indeed, commit wrongdoing "against beneficiaries of the Estate".

By the way, the contract to make a will was, by the time of commencement of the Mokay action, rejected by probate court in May of 2007.

So, if Daniel Mokay is now saying that the Estate, represented by Richard Harlem, was suing on behalf of beneficiaries of the Estate, an untenable situation arose where

And, by the way, since Daniel Mokay now admitted under oath that the lawsuit was on behalf of beneficiaries of the Estate, which included the decedent's widow Connie Mokay, a co-defendant in the action, it appears that Richard Harlem represented in the Mokay action EVERBODY except Mr. Neroni, two defendants and five plaintiffs.

I simply don't see how Mr. Harlem can keep his law license after this confession of Daniel Mokay.

Mr. Neroni was disbarred for alleged fraud upon the court - without a hearing - with a collateral estoppel attached to a partial summary judgment in an action where the conflict of interest was denied by Judge Fitzgerald, but is now reasserted with new force by the Appellate Division's January 22, 2015 decision and by admission under oath by Daniel Mokay sworn to on May 6, 2015.

So, will Mr. Neroni's order of disbarment will NOW be vacated?

And will Richard Harlem (and attorneys who helped him) be finally disbarred for openly committing fraud upon the court and for stubbornly pursuing a frivolous lawsuit for 8 years?
Posted by Tatiana Neroni at 10:44 AM