More on credibility of New York Senator John A. Defrancisco - and on his bills that appear to help his own and his son's law business. Should the feds get involved with investigation of yet another New York Senator?


I first wrote about Senator John A. Defrancisco on this blog in August of 2014 and raised the issue that the senator, along with other senators who are practicing attorneys, should be impeached for sponsoring bills and voting on bills that help their law business financially.

I do not presume to believe that Senator Defrancisco should be reading my blogs.

Yet, I do presume that Senator Defrancisco should not be continuing to sponsor bills that benefit his law business financially, and he still does it, while attempting to appear on the white horse and fighting prosecutorial misconduct in New York.

In my previous blogs today I raised issues as to credibility of New York State Senator John A. Defrancisco who was pushing his bill for a "state commission" to deal with prosecutorial misconduct, modeled after the New York State Commission for Judicial Conduct - which, as practically every complainant about judicial misconduct (rampant in New York) knows, tosses meritorious complaints, and New York courts give complainants no recourse to appeal those dismissals, leaving them not only without a remedy, but in the hands of enraged judges who know about the complaints and revenge against the whistle-blowers, with no consequences for that revenge.

What raised red flags as to credibility of Senator Defrancisco for me is, among other things, his claim that the majority of prosecutors in New York were doing their jobs properly.

First, there is no statistics to say that.

I guess, Senator Defrancisco does not care to ask defense attorneys, for he might not like what he would hear back, that prosecutorial misconduct is the rule in the State of New York rather than the exception - or Sen. Defrancisco tries not to ire prosecutors too much, because people who are prosecutors today may become judges tomorrow, and Senator Defrancisco is a practicing licensed attorney whose livelihood may be in the hands of people he is criticizing.  Nothing like a neat little conflict of interest.


Perturbed by Sen. Defrancisco's not-too-forthcoming statements to his electorate, I looked into Senator Defrancisco's background further.

This is what I found. 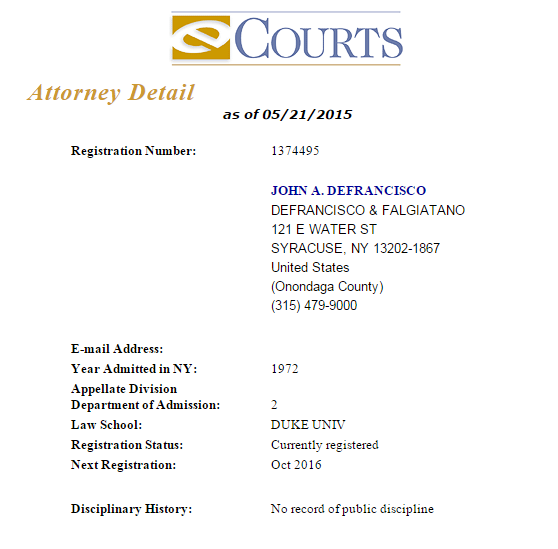 Yet, the webiste of Defrancisco & Falgiatano law firm does not list Senator Defrancisco as one of its attorneys, but it lists a younger male with the same last name, Jeff D. Defrancisco:

It is a disciplinary violation for an attorney to provide an incorrect registration, so I wonder whether Senator DeFrancisco will be subject to attorney discipline - or his status as a Senator will protect him, the same way it protects prosecutors whose misconduct Senator Defrancisco allegedly wants to address through creating a state commission on prosecutorial misconduct.

Let's note that Jeff D. Defrancisco (as I understand, Senator's son), who, in his 15 years of practicing, 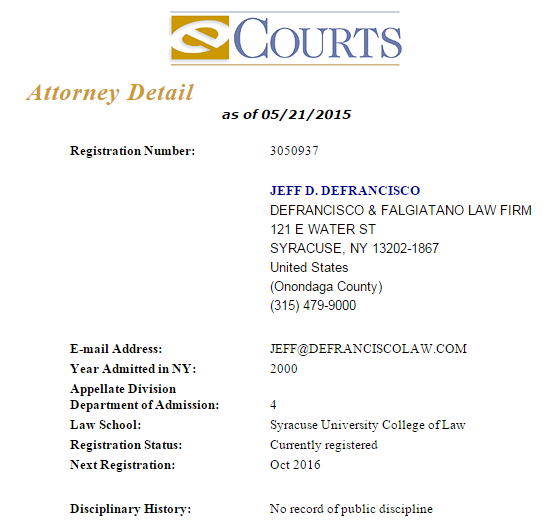 worked, besides his father's law firm, in the prestigious (and politically connected) law firm Harris Beach LLC that I wrote about on this blog, too, and in the Onondaga County District Attorney's Office. 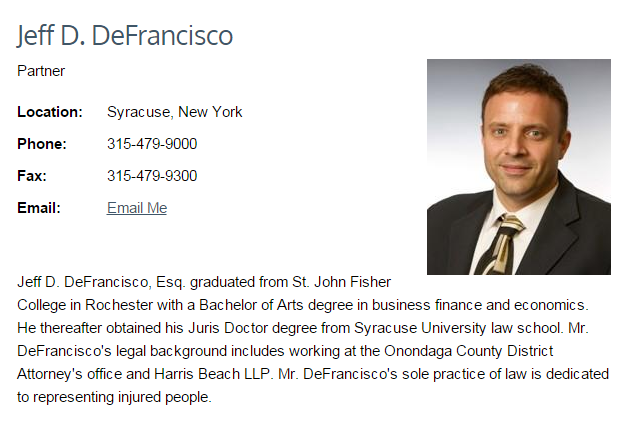 The Onondaga County DA, according to news reports, is the law school friend and roommate of the Chief Administrative Judge of the 5th Judicial District James Tormey.

Or, Sen. Defrancisco would be interested to make that bill as mild as possible to create yet another paper (and toothless) tiger to deflect public anger about misconduct of public officials - but not to hurt his and his son's own business chances and financial well-being.

What further bothered me is comparison of the list of the types of cases handled by Defrancisco & Falgiatano with the list of legislative activities of Senator Defrancisco.

These are the types of cases that the D & F law firm deals with, reportedly winning multi-million dollar lawsuits for their clients:

These are some of the latest bills sponsored by Senator John A. Defrancisco: 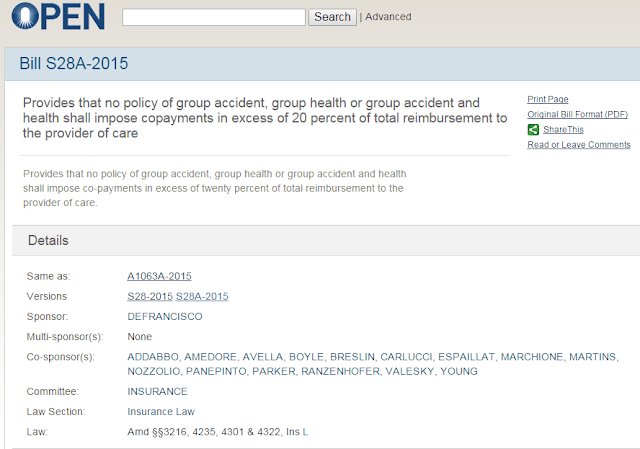 When Senator D's law business is, very likely, to oppose insurance companies who do not settle claims of their clients, Senator D has no business sponsoring legislation pertaining to any restrictions upon insurance companies, it is a direct conflict of interest (in my opinion).  The above bill is clearly in favor of Senator D's clients - it is not necessarily a bad thing, the bill in itself, the bad thing is who is sponsoring it, because the bill definitely helps potential client base of the Senator.  I wonder who lobbied the bill. 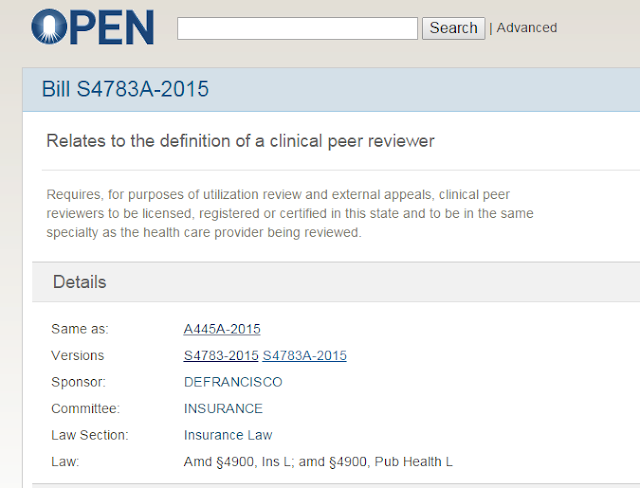 The bill for enhanced requirements for clinical "peer reviewers" appear to help in Sen. Defrancisco medical malpractice actions, making more strict (and costly for the hospitals) to review actions of their physicians, making it easier for attorneys suing for medical malpractice to attack alleged impropriety of physician's actions, and making hospitals more prone to settlements.  Once again, regardless of whether the bill will or will not be beneficial to the general public, Senator Defrancisco should not have touched this topic with a 10-foot fishing pole, because the Senator himself and his law firm, and its client base, will benefit from the bill, creating an irreconcilable conflict of interest against sponsoring such bills and an appearance of impropriety. 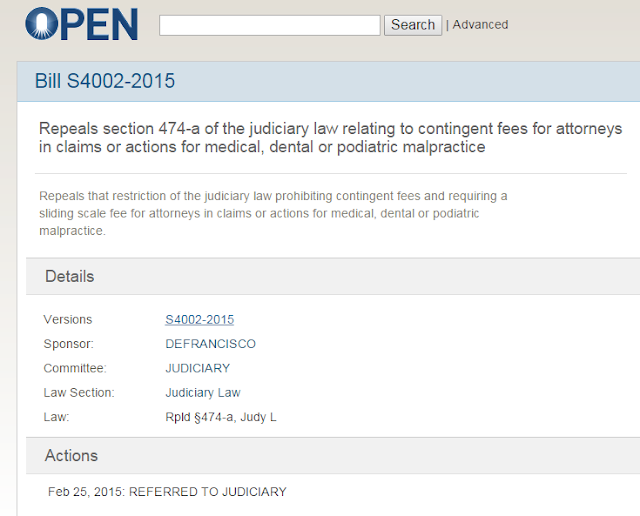 The bill, of course, sites an allegedly good faith reason for repealing a restriction on contingency fees: 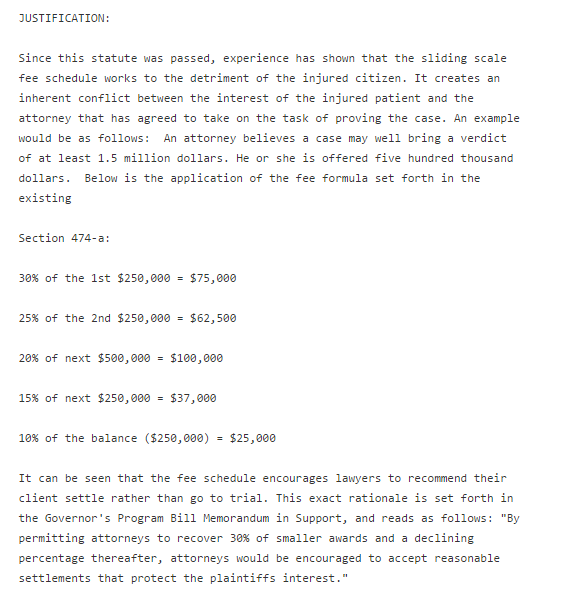 Yet, it is undeniable that Senator D's and his son's law firm will financially benefit - big time - as attorneys specializing in personal injury and medical malpractice lawsuits, if the bill passes, and such sponsorship should be prohibited to Senator D.

The bill talks a lot about ethics and conflicts of interest - but it omits the fact that sponsorship of this bill by Senator Defrancisco is one big conflict of interest and an ethical violation for an attorney. 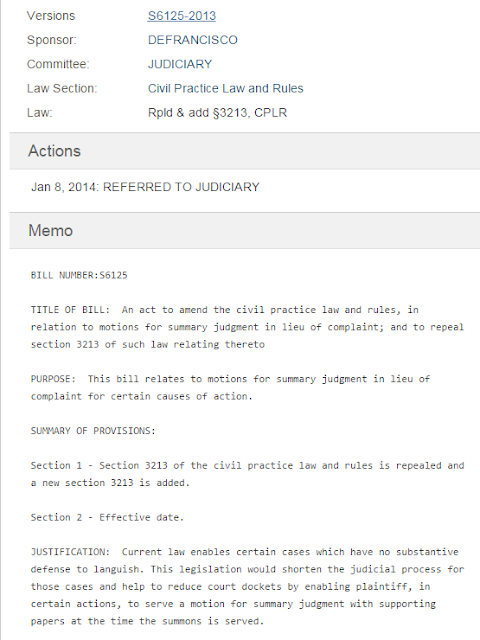 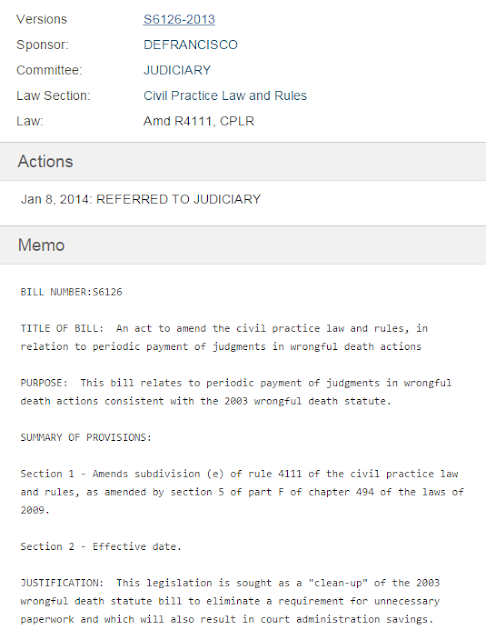 Legislating to change court rules that make it easier for a law firm to obtain a money judgment in court, should be prohibited to a Senator who is an attorney actively practicing, along with his son, in court, due to irreconcilable conflict of interest. 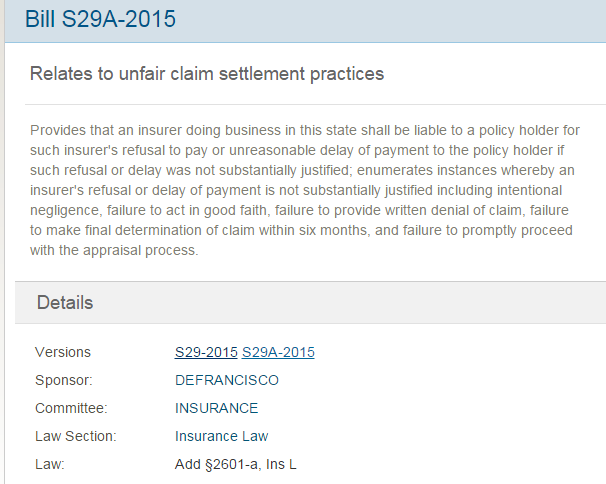 The bill, once again, directly relates to Senator D's and his son's law business, and such sponsorship should be prohibited to an interested legislator.

So, Senator Defrancisco - if you want to deal with attorney misconduct, including prosecutorial - first clean up your own act as a legislator drumming up legislation for his own and his son's law business.

Posted by Tatiana Neroni at 7:29 AM