When Mary Gasparini argues something to the court, and especially on issues in which she has no competency as an attorney, she sometimes makes interesting revelations.

For example, Mary Gasparini, as a criminal prosecutor, argued to the court that exposure of prosecutorial misconduct (her OWN misconduct), is not protected by the 1st Amendment.

I cited a case claiming that it is - that blogging for public interest is protected by the 1st Amendment.

Mary Gasparini attempted to shift the issue and said the following: 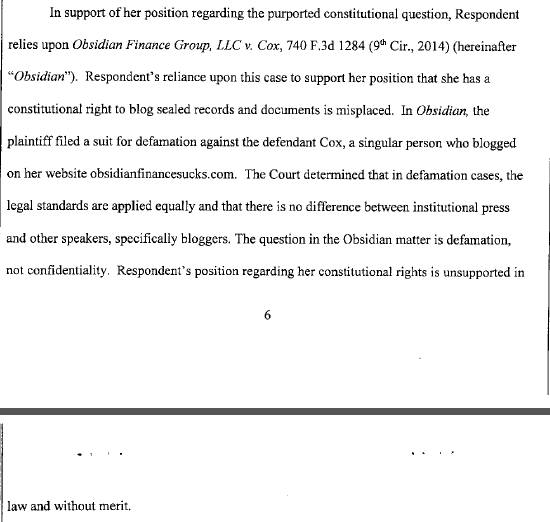 Mary Gasparini stubbornly refuses to accept the law of the State of New York that provides that an attorney who is the subject of a disciplinary proceeding holds the key to the proceeding's privacy and confidentiality - as soon as the attorney waived her own privacy (and I did, in writing, on notice to Mary Gasparini, in December of 2014), the proceeding is DEEMED open to the public as a matter of law.

Thus, Mary Gasparini's claims that anybody "blogged sealed records and documents" are fraudulent and defamatory.

Obsidian (the case sited in the snippet) actually provides that even if statements in the blog about a private person, but on issues of public interest, are FALSE, they are still protected by a higher standard against defamation, under the 1st Amendment of the State Constitution.

Mary Gasparini asserts that Obsidian is a case about defamation, not confidentiality.

To say that is the same as to say that my case is the case about confidentiality, not defamation.

If is it not about defamation, does it mean that Mary Gasparini just acknowledged to what she has been accused on the blog - conspiring to cook court transcript and knowingly submitted fabricated transcripts to get her way?

So, now, as Mary Gasparini argues, it must be illegal in New York to publicly report commission of a crime if it is committed by a prosecutor and a judge in the course of a publicly funded proceeding that is open as a matter of applicable New York law?

And, as she argues, I must be put in jail for violating the sealing order that was put in place to protect my privacy that I waived?

The word "stupidity" does not even begin to describe what is going on, and that taxpayers money are spent on such prosecutions, done clearly for purposes of personal revenge, should be a subject of criminal investigations by state and federal law enforcement - if they are independent enough and have enough courage and integrity to do investigate public officials for fraud.
Posted by Tatiana Neroni at 1:42 PM