Appellate Division 4th Department - Oh, what a tangled web they weave when first, second, third, etc. time they practice to ... mislead and discriminate against litigants the court does not like

Here is what I received today from Appellate Division 4th Department: 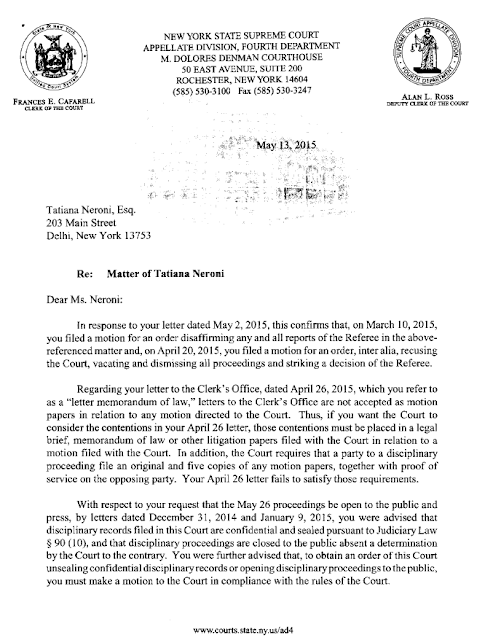 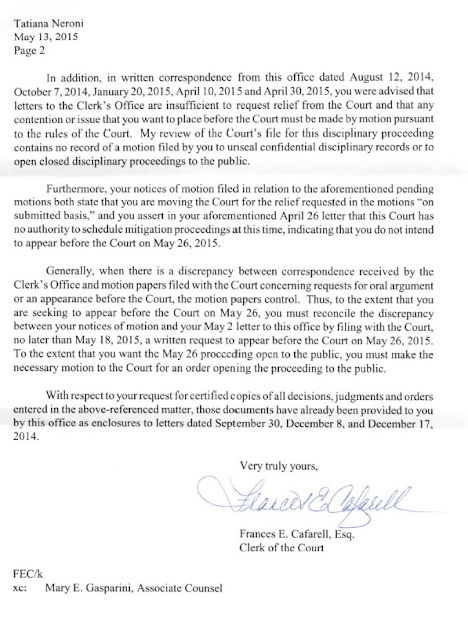 The letter is in direct contradiction to the previously issued directive to the Grievance Committee to file an Affidavit of objections to open proceedings to the public.

Before Ms.Gasparini filed her affidavit and before I had an opportunity to respond to it, the court already made a decision - through its clerk Ms.Carafell, and refused to produce to me an order of the court refusing to open court proceedings to the public, in compliance with New York State Constitution, Article VI, paragraph 4, subsection (b) (requiring that all decisions of an appellate court must be made not by its clerk, but by a quorum of four appellate justices with a concurrence of three appellate justices).

So, in the 4th Department it is the clerk making orders and interpreting the applicable law.

Obviously, the court is ok with this situation.

The only thing that the court is concerned about is how to keep the public and the press away from my disciplinary proceedings so that it does not witness a hearing of the PROSECUTION's motion to confirm that FABRICATED referee's report based on UNAUTHORIZED "decision" by the referee and upon FABRICATED court transcripts - which is uncontroverted.

After dismissing the criminal proceedings sua sponte on May 11, 2015, the clerk of the court has the audacity to tell me that I "voluntarily" decided to make my motions to disaffirm and for other relief on submitted basis, and not because I was forced, by the fact that Mary Gasparini's fabricated criminal charges against me, to "choose" whether to appear on the civil motion and at the same time run the risk of being arrested and locked up for the crazy charge of violating my own privacy - and possibly die in jail, because nobody at this point can guarantee my safety when in the custody of the New York State government, or whether to make the civil motions on submitted basis.

It is a real choice, I know.

After having taught Mary Gasparini how to properly file criminal charges against me - which Mary Gasparini, in view of her utter incompetence, failed to do anyway - the court now tells me that because I "chose" to make a motion to disaffirm on submitted basis, I cannot now ask that the proceedings, whether on submitted basis or otherwise, be open to the public.

The court does not recognize that the prosecutor MAY NOT make a motion to CONFIRM the referee's report on submitted basis, that such a motion can be done ONLY with a due process hearing in view of due process issues of my interest in my livelihood and reputation involved.

So, apparently, a hearing on the prosecutor's motion TO CONFIRM is a must - with the respective request to open that hearing to the public, even if the court chooses to exercise selective blindness and claim that my pending cross-motions were "voluntarily" filed on submitted basis only, even though I was forced to do that by Mary Gasparini's frivolous criminal charges - dismissed sua sponte before the initial appearance on those charges when I started to press the court to open all proceedings, including the criminal proceedings, to the public and the press.

We'll see what the "honorable" court will do next.

PS  By the way - note that this letter dated May 13, 2015 does not bear the usual stamp CONFIDENTIAL on top of it - so the proceedings are now open to the public, even though Ms.Carafell is pressuring me to jump through additional hoops to have the proceedings open to the public, even though the only thing the law requires of me is make a request to open and waive my privacy (which I did numerous times)?

Posted by Tatiana Neroni at 9:28 AM