19 seconds per exhibit! Judge Kevin Dowd makes record speed in accepting multipage exhibits at the ex parte secret trial without looking at them

I obtained the "non-jury trial minutes" from the Delaware County Supreme Court for the trial that was held by Judge Kevin Dowd (subpoenaed witness in the case) ex parte, after Judge Dowd diagnosed me without seeing me and rejected my doctor's diagnosis as being "without merit" and deeming me not appearing at the trial without good cause (of course, an immigrant female attorney may not have a good cause not to appear at Judge Dowd's trial, even with a properly diagnosed medical injury, it is only American-born male attorneys who are given adjournments for medical reasons for the asking by Judge Dowd).

The non-jury trial minutes copy of which I received directly from the Delaware County Supreme Court Clerk, did not have a stamp that it was filed officially with the court, and the index of the case Mokay v. Mokay did not have an indication, as of yesterday, that the non-jury trial minutes made (allegedly) on April 7, 2015 were filed with the court: 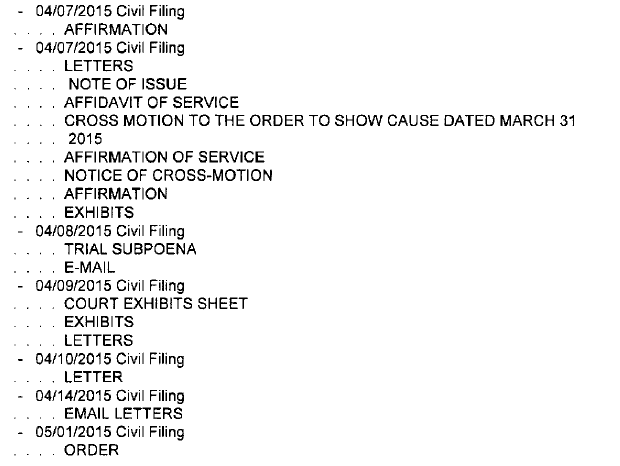 The "non-jury trial" (jury was dismissed because Judge Dowd deemed that I waived jury trial for my client by injuring my back and not appearing for that reason) started at 10;39 am and evidence was closed at 1:24 pm, with a lunch break from 11:57 am to 1:15 pm. 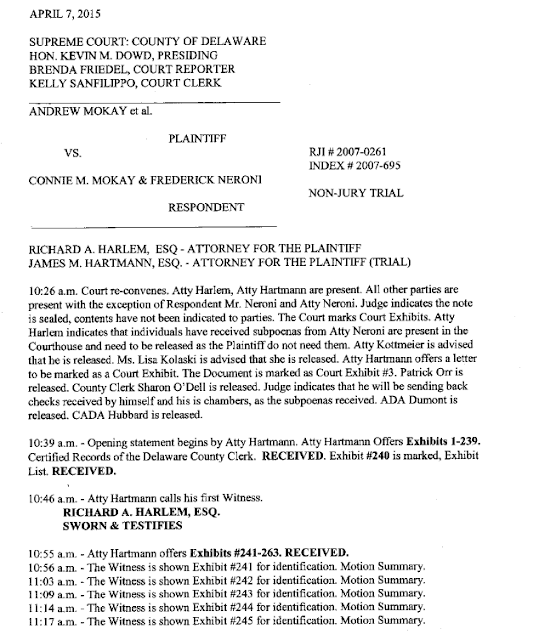 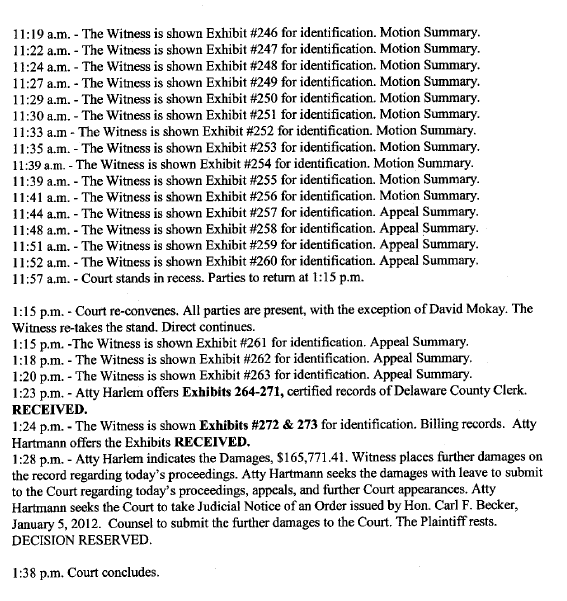 Thus, the net time of the trial for receipt of evidence was 1 hour 18 minutes before noon and a whopping 9 minutes in the afternoon, for the total of 1 hour 27 minutes.

That is, ladies and gentlemen, 87 minutes of the court's valuable time that was spent on the trial.

During those 87 minutes of the court's valuable time the court (Judge Dowd) accepted:


I have to say that Judge Kevin Dowd, probably, made it into the Guinness book of records in the speed with which he accepted 273 documentary exhibits contained in several large boxes, during the time period when the judge was not able to even read those exhibits and see whether they are relevant to the trial.

It is not surprising that Judge Dowd instructed court security to mislead the public that the trial was concluded when the jury was dismissed, so that nobody would see the particulars of how the judge DID NOT read what is offered in evidence to the court - because he COULD NOT read multi-page documents at the speed of 19.12 seconds per each, it is simply not physically possible.

We will see what kind of ex parte decision the ex parte non-public trial produced.

That, ladies and gentlemen, was a definition of a "speedy" trial - I only wonder why Judge Dowd bothered to come to conduct it.  He could just as well have ordered Richard Harlem to deliver boxes of evidence into his chambers, he accepted additional evidence in his chambers from Richard Harlem anyway.

I am holding my breath whether Judge Dowd will grant that request.

Nothing is impossible for Judge Dowd when he is trying to bend over backwards for a son of a judge Richard Harlem - and to exact revenge against my husband for suing Judge Dowd and exposing him as incompetent, which this trial only confirms tenfold.