Will judge Mulvey tolerate open insubordination to his orders by a judge and clerks of two courts? Will Judge Mulvey lose his own face as the court administrator and judge to save face of his subordinate who does not seem to be able to read Judge Mulvey's orders?

An order was made by the Chief Administrative Judge in the 6th Judicial District: 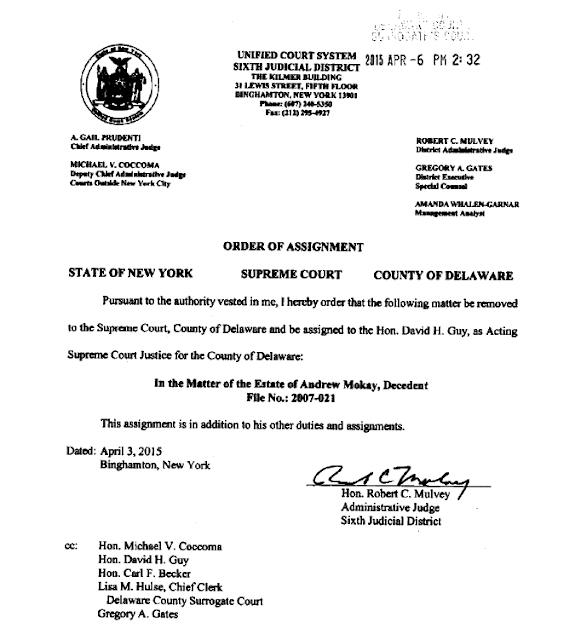 The order was clear and unambiguous and was copied to Judge Mulvey's superior Judge Coccoma.

Neither Judge Mulvey nor Judge Coccoma found the order erroneous or made any corrections.

The clerk of the Surrogate's Court did not do that.

Even after the assigned judge was notified that Petitioner's attorney is aware of the change of jurisdiction to the Supreme Court, the assigned judge arrogantly continued to disregard the clear and unambiguous order of removal and of assignment made by Judge Mulvey on April 3, 2015 and directed the Supreme Court Clerk Kelly Sanfilippo to send me a letter advising me that the case was in the Surrogate's Court despite the order of April 3, 2015, and that the order of April 3, 2015 is "erroneous".

Will Judge Mulvey "correct" the order which is not erroneous on its face and indicates what Judge Mulvey wanted and directed to do - a transfer of the case to the Supreme Court and an assignment of judge Guy to the removed Supreme Court case?

So, to save Judge Guy from rightful accusations of misconduct, Judge Mulvey will present himself as not knowing what he is doing when he is issuing orders of removal and transfer?

I bet the safest way for Judge Mulvey to act is to leave things as they are - and remove Judge Guy from the case where he has already shown his incompetence through inability to read and comprehend even the order of his own assignment - to the Supreme Court case.

If a judge cannot comprehend a written order clearly stating that he is assigned to a Supreme Court and not to any other court - that judge should not be on the bench, and it is the incompetence of Judge Guy that should be Judge Mulvey's concern as the court administrator of the 6th Judicial District, and not the concern of how to save Judge Guy from prosecution for misconduct by acknowledging that it is Judge Mulvey who made an "erroneous" decision of transfer and not Judge Guy who does not seem to be able to read and comprehend court orders of assignment.

Will Judge Mulvey tolerate such an insubordination that makes him look like he does not have the court administration in his judicial district under control?