The U.S. Supreme Court precedents and the continued circus around their legal status. The case of Roy Moore and the apologies of Kansas Attorney General Derek Schmidt

The U.S. Constitution that all attorneys and judges in the United States take an oath to support, obey and enforce has a Supremacy Clause which does not include U.S. Supreme Court decisions.

Chief Judge of the State of Alabama Roy Moore openly stated that the U.S. Supreme Court decision regarding gay marriage is not the Law of the Land.

Chief Judge Roy Moore was suspended without pay for stating, and adhering to the contents of the Federal Constitution that every judge and attorney in this country takes a pledge to obey, enforce and uphold.

By the way, Chief Judge Roy Moore, in an interview with the CNN anchor Chris Cuomo, son and brother of two New York State Governors, cornered Chris Cuomo with a question whether Chris Cuomo would have followed Dred Scott had he been a judge at the time Dred Scott was decided, and Chris Cuomo said "yes".

The Kansas attorney general cited the Dred Scott in a case where the state law banning 3rd trimester abortion was sought to be revived.

The Dred Scott case was cited by the Kansas Attorney General for the proposition (used in that case to support endorsement of slavery) that the announcement of "inalienable rights" in the Declaration of Independence does not have any legal meaning and is just puffery, hollow words.

Then, the Attorney General apologized for citing Dred Scott and withdrew the motion where it was cited.

Nevertheless, Dred Scott remains a U.S. Supreme Court precedent which remains on the books and required to plunge the country into a civil war in order to undo that ruling - so many lives could be spared had the U.S. Supreme Court decided that case differently, but it did not.

The Kansas Attorney General finally apologized for citing to Dred Scott in support of his arguments.

Yet, the U.S. Supreme Court Chief Judge Roberts unapologetically relied on Dred Scott in his dissent in the same sex marriage case.

In Dred Scott, as Chief Judge Roberts pointed out in his dissent in Obergefell v Hodges, the same sex marriage case, the U.S. Supreme Court has struck a state statute, a "Missouri Compromise" giving humanity to African Americans, whether they are slaves or free descendants of slaves, on the basis that that legislation "restricting the institution of slavery violated the implied rights of slaveholders". 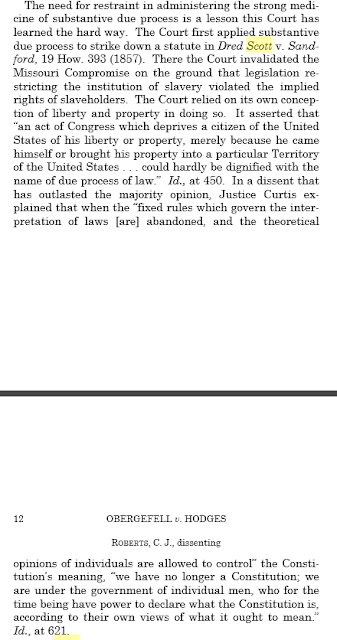 Chief Judge Roberts acknowledged that Dred Scott it took a war to overrule that case: 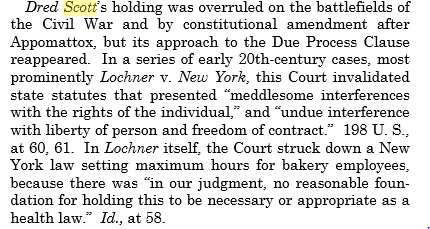 Yet, Chief Judge Roberts blames the entire due process approach as "meddling" into the affairs of the state - putting on the same grounds Dred Scott that denied humanity to African Americans and the Lochner case which was simply enforcing economic freedom of bakery employee to work as many hours as they want without interference from the state.

Chief Judge Roberts was not punished for his views by suspension from office - the way Judge Roy Moore did by refusing to follow the majority opinion as "the Law of the Land" - which it isn't, according to the Supremacy Clause of the U.S. Constitution that both Judge Roy Moore and those who suspended him, are sworn to obey.

We really need to decide what is the legal of U.S. Supreme Court cases when it causes so much havoc in this country - where


That most often happens in civil rights cases and in cases where attorneys are sanctioned for criticizing the government and especially judges, and cite in their defense the U.S. Supreme Court cases prohibiting content-based regulations of speech without "strict scrutiny".

We really need to decide for ourselves as citizens of the United States of America whether we as a country are actually ruled by the U.S. Constitution, or whether our government forced us to accept that the U.S. Constitution has become simply a necessary symbol to take public office and then be discarded and disregarded.

Not only this year's presidential elections are making this country into a laughing stock of the world - the circus with the status of U.S Supreme Court precedents cannot invoke respect to our country either.

If we are a constitutional democracy, then we, and all of our public servants, all public officials in all branches of the government, at all levels, local, state and federal, must follow our own U.S. Constitution and every part of it, including the Supremacy Clause.

Otherwise, we are not who we say we are, and are not the constitutional democracy.

We are a theocracy of the courts, where we are forced to believe and follow what the prophets in courts think the U.S. Constitution is - not what we the People think what it is.

Let me, without any apologies, quote Dred Scott on one other proposition - what constitutes a sovereign in the United States:

" The words 'people of the United States' and 'citizens' are synonymous terms, and mean the same thing. They both describe the political body who, according to our republican institutions, form the sovereignty, and who hold the power and conduct the Government through their representatives. They are what we familiarly call the 'sovereign people,' and every citizen is one of this people, and a constituent member of this sovereignty."

I am subscribing to every single word of this quotation.

We the People are the popular collective sovereign of this country, and We the People allowed ourselves to be ruled by our servants, whether they are legislators, prosecutors, police or judges only within the boundaries of the U.S. Constitution.

The U.S. Constitution, its text and not how it is interpreted by the group of 9 people, is the Law of the Land in this country.

In that Constitution, the U.S. Supreme Court cases are NOT the Supreme Law of the Land.

They are the last appellate decisions in a certain, separate, particular cases.

Not less, but not more.