In February of this year I wrote about a Maryland judge Robert Nalley (a white man) who ordered tasering of a black criminal defendant for making constitutional arguments in court for himself.

The judge was then charged with a misdemeanor only (for assault with grave physical injury!), ordered to pay a fine, serve probation only and taken off the bench.  Still, no jail time - and just a slap on the wrist.  Barred from serving as a judge any more?  He is 72, it's not a big loss for him.

Here is Judge Nalley - bow tie and all, does not look like a dangerous violent criminal that he is, does he?

You might imagine that there can be nothing more disturbing about a courtroom proceeding than a judge ordering to taser a handcuffed litigant for making constitutional arguments to the judge.

And that is what a Michigan judge John McBain, reportedly, just did. 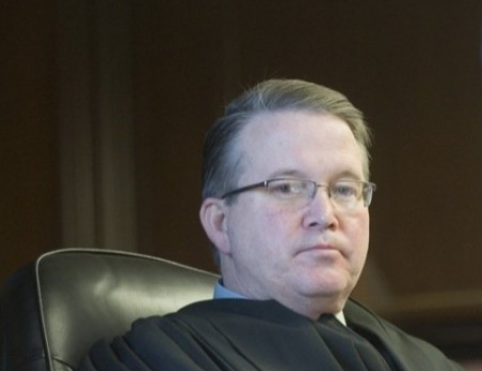 Here is the official biography of this "honorable" judge. 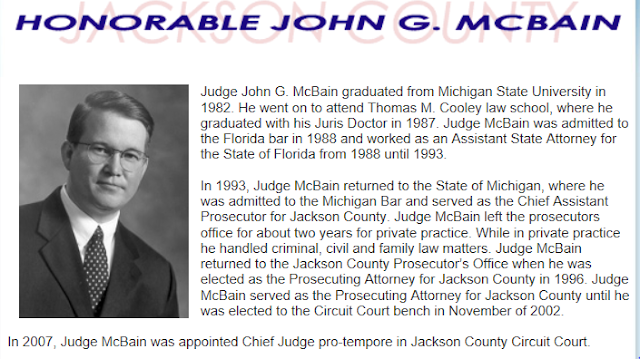 Judge McBain was a career prosecutor before coming to the bench, he worked as a prosecutor, first in Florida, then in Michigan, since he was admitted to the bar, since 1988 and until 2002 when he was first elected as a judge.

So, Judge McBain was faced with a litigant who was charged with contempt of court - violating an order of protection.

Since such charges are criminal in nature and may involve jail time, the litigant was entitled to an attorney, an appointed attorney if he could not afford one.

There is no indication in reports regarding what the press calls a "scuffle" in the courtroom that any attorney for defendant Jacob Larson was present.

The judge was "upset" (that is the polite word) because the defendant:

1) talked about the judge's own daughter, and
2) raised the issue that the judge is "buddy-buddy" with the subject of the order of protection that the defendant allegedly violated.

Since the defendant's alleged violation of the order of protection occurred out of court, his contempt of court proceedings were entitled to an evidentiary hearing and an attorney representing him there.

Judge McBain did not assign an attorney, discussed the charges with the unrepresented defendant directly, and engaged in a verbal scuffle because defendant hurt his feelings personally - while the ONLY thing that Judge McBain could ethically do under the circumstances was to RECUSE from the action.

Instead, the judge not only ordered tasering of a litigant because the judge did not like the litigant discussing the judge's daughter and raised the issue that the judge may be too familiar with the opponent in litigation, but joined in physically overpowering the defendant.

Every concept of "neutral arbiter" of judicial proceedings, of course, was ripped off these proceedings, together with the black robe.

Judge McBain's robe should remain where Judge McBain left it - ripped off him, for good.

And, Judge McBain should also be disbarred for his behavior.

This is not a petty "ethical violation".

This is a violent outburst of a judge of 14 years and an attorney of 28 years of experience who knew better.

The question I would also ask - why did Judge McBain toss his black robe before he joined the brutal overpowering of a litigant in the courtroom?

To confuse the viewer into believing that the second man joining the first who is tackling a defendant on the floor is simply a second court attendant, white shirt and all - instead of a judge?

So, the judge knew exactly what he was doing and thought his actions through to the point of attempting to deceive the viewers of the court recording, to beat the future charges of misconduct?

John McBain is not simply a violent man.

He is a violent man who knows that he is COMPLETELY IMMUNE for what he is doing in the courtroom during the court proceedings.

If Jacob Larson, the man the judge PHYSICALLY tackled during the court proceedings, sues judge McBain, the case will be dismissed based on judicial immunity.

And that is the best illustration of why judicial immunity MUST be abolished legislatively - because it allows the judge TO COMMIT VIOLENCE in the courtroom.

Imagine that this judge not just tackled a litigant, but shot him, right in the courtroom.

And, we do not know whether judges have guns on them during court proceedings or not.

If a judge shots a litigant or anybody else during a court proceeding, he will STILL be immune from a lawsuit.

Judge John McBain is a violent man who engaged in a physical assault upon a litigant who presented no danger to safety other than VERBALLY protesting against unlawful actions of Judge McBain.

And, Judge McBain is a product, as a prosecutor and as a judge, of a mentality that was in-bred into him over 28 years of his experience as a judge and a prosecutor, since he was admitted to the bar, for his entire legal career that anything - ANYTHING - he does in the courtroom will be covered by immunity, so he can just go ahead and do whatever he wants.

Note that the defendant raises the issue that the judge cannot simply send him to jail - even if that was expressed not in the most courteous language:

I described this "move up or move on" tactic regularly utilized by New York judges, on this blog:

So, it is the taxpayers' resources that will be wasted on appeals from Judge McBain's illegal decisions aimed at using his paid position of power, as a public servant, to fix his personal grudges against a defendant who dared to mention the judge's daughter and the judge's potential personal relationship with a litigant in open court.


Will Judge McBain be required to reimburse taxpayers of the State of Michigan for that waste?

I doubt it - unless there is public pressure to make Judge McBain do it.

Judge McBain engaged in a violent act in his courtroom apparently believing that he is immune from lawsuit for his action - and that, likely, he will not be charged or disciplined as a judge or as an attorney, because who is going to discipline him - attorneys appearing in front of him, whose licenses are in the hands of judges, just like him?

Nobody stopped the judge - on the video - from doing what he was doing.

Nobody confronted the judge - even though there are people shown sitting in that courtroom.

Everybody is afraid and thinking that WHATEVER the judge is doing is right.

What kind of country have we become that we allow this to happen in front of our own eyes, in a public courtroom?

We will see in the future whether the State of Michigan will have the decency of having Judge McBain disbarred, taken off the bench and charged with assault.

I will continue to cover this story.

Posted by Tatiana Neroni at 5:28 AM