While reporting on judicial misconduct, I came across bad judges with pretty telling names.  I already reported on judges by the name of Free, Best and Real.

Now is the turn to report on Judge Kreep.

Judge Gary Kreep, of San Diego, California, was recently charged with 11 counts of misconduct, some valid, some not and some really petty.

Judge Kreep's behavior, as charged, is crude, on occasion improper, sexist and racist.  And, Judge Kreep engaged in ex parte communications and did not represent facts correctly during his election campaign.  Yet, the timing of the charges - 4 years after the election, the pettiness of some charges, and the fact that this particular judge was the target of blanket peremptory challenges by criminal prosecutors suggests selective enforcement of judicial discipline against Judge Kreep.

After all, he did nothing that other judges do not do - on a regular basis. Not that it is right, but, once again - anybody appearing in American courtrooms, after looking through the charges, can find that "their" judges behaved in the exact same manner, as to one, more than one, or all charges of misconduct against Judge Kreep.

Here is the description of the charges.

Judge Kreep likes to crack a joke - like this:

And he joked again with a public defender.  Like this: 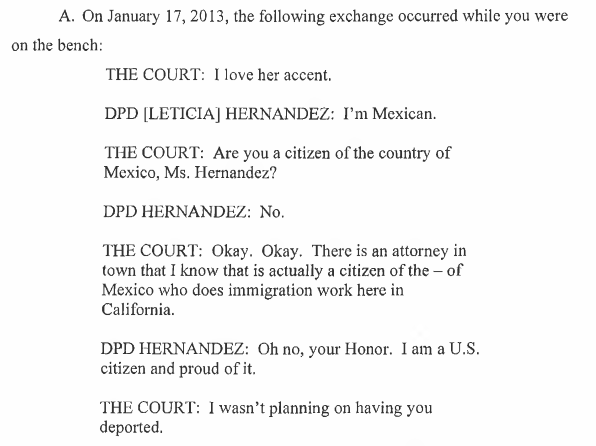 And, also jokingly, of course, Judge Kreep called attorneys appearing in front of him by nicknames - just as retired Delaware County (New York) Judge Carl F. Becker did (he called an attorney a clown and a Santa Claus).  Here is Judge Kreep's jokingly invented nicknames for attorneys: 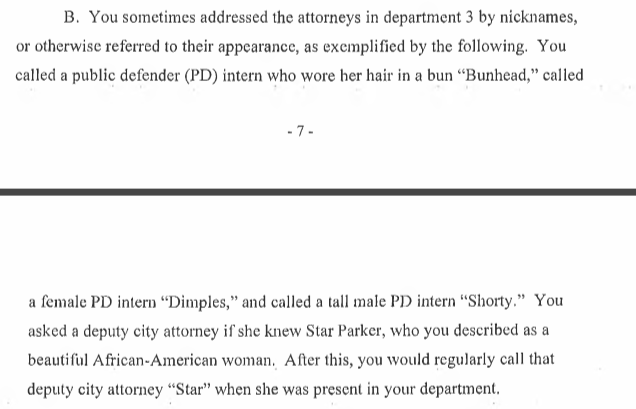 JudgeKreep also joked about an attorney's pregnancy - that the opposing counsel needs to wrap up the arguments shorter so that the pregnant attorney can go home and have her baby:

And Judge Kreep openly joked about how good a friend he was to a disabled personal friend:

I wonder how many friends Judge Kreep will have left after that particular disclosure, and how many of them will ask Judge Kreep for help - or offer help, for that matter.

And #JudgeGaryKreep joked yet again - with a criminal defendant:

Judge Kreep is a judge in San Diego, California.

The Bunny Ranch is a brothel in Nevada, which also has an online sexually explicit content.

Apparently, Judge Kreep had personal knowledge (and, maybe, experience?) of this brothel - which he readily shared in an open courtroom, jokingly of course, while accepting a plea from a young woman for prostitution and giving her a fatherly advice as to how to turn her life around.

Judge Kreep jokingly - of course - referred to criminal sentences he imposed on people as "gifts":

Judge Kreep referred to cases by ethnicity of criminal defendants involved - and connected that ethnicity with attorneys appearing in front of him:

Judge Kreep is accused of using crude language in the courtroom:

Amazingly, while lawyers are usually very submissive to judges, Judge Kreep was, apparently, so bad that lawyers boycotted his courtroom.

Of course, I do not know how that can technically be done without hurting clients' cases if the judge is assigned to the case - but a boycott by lawyers was reported, and, reportedly, on the day of the boycott the judge threatened a public defender that "they" will come "for her" if "they" "came for" the judge.

Here are the charges against Judge Kreep in full.

Judge Kreep is also charged for: 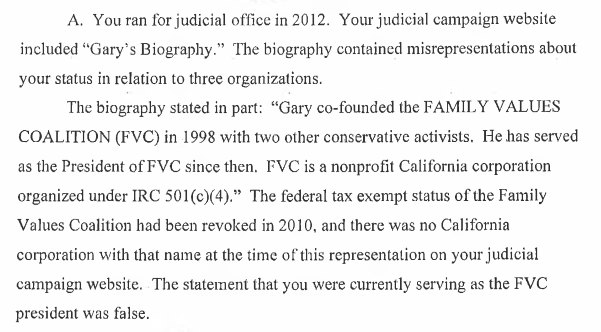 (3 lengthy examples are included into the charges, you can see them fully here); 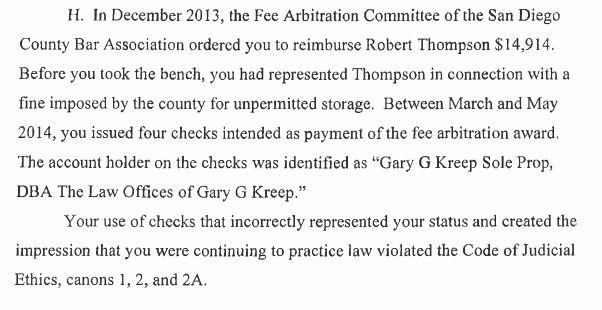 All of the above, with the one exception I noted (as to voting rights of a candidate for public office) is bad.

But, I bet that readers who have any experience with American courts would say that all judges that they appeared in front of are exactly the same - and are doing exactly what Judge Kreep was doing.

And, judges who do all of that, do not get any discipline - the absolute majority of complaints against judges are dismissed without discipline or even an investigation, in all states, including the blessed state of California, home to Judge Kreep.

Moreover, charges were filed in 2016 against Judge Kreep for his alleged misconduct in 2012 during his election campaign, 4 years after the fact.

Why Judge Kreep?  Why now?

Is it a belated revenge against Judge Kreep for being what was characterized a "legal activist" and a "high profile birther", questioning authority of President Barack Obama to be re-elected to office based on claims that he was born outside of the United States?

Also, even though charges to mention that Judge Kreep made inappropriate comments about a public defender, the bulk of the charges were because of the boycott by the City Attorneys - who usually act as prosecutors.

And, back in 2013, when Judge Kreep was just elected, by a narrow margin, it was mentioned in a high-profile legal blog that Judge Kreep "earned the ire only of prosecutors", while public defenders had no problem with the judge.  The ire that Judge Kreep somehow drew from the prosecutors resulted in a "blanket challenge" - through the use of statutory peremptory disqualification - from all criminal cases, I described what is a peremptory challenge to a judge more than 2 years ago, here.

Not to mention that Judge Kreep's opponent in his election campaign, Garland Peed, is reportedly working in the city attorney's criminal division that is boycotting the judge.

And, many Counts of the charges are outright petty.

You just don't charge a judge with an ethical violation simply because he complimented a female attorney or employee in the courtroom for being pretty.

By the way, one of the counts was that Judge Kreep had ex parte communications with public defenders.

I bet that Judge Kreep would never have been charged if he did what other judges are usually doing - having ex parte communications with the prosecutors.

I can recall another case that I recently reported on - of New York judge Thomas Keefe who was forced to resign because prosecutors were not happy with him.