Nobody puts Baby in the corner. The U.S. Court of Appeals for the 2nd Circuit allows politically connected attorneys from the U.S. Attorneys' office to practice without admission or renewal

My husband was served with a Response brief in the case where the U.S. District Court for the Northern District of New York was declared by the U.S. Court of Appeals for the 2nd Circuit a party Appellee as of November 12, 2015.

Of course, the U.S. Court of Appeals assigned the U.S. Attorney General's office for the Northern District of New York to handle the case, and attorneys who appeared in the case are not from that office, making their appearance of questionable validity.

The names of attorneys whose name (not signature) appeared on the Appellee Chief Judge Glenn Suddaby's brief, are:

Of course, it is questionable that the U.S. Attorney General's office has a right to appear in opposition to my husband's appeal of anti-filing injunction where part of the basis of that anti-filing injunction is the case Neroni v Grannis (a still ongoing case) pertaining to which Mr. Neroni has filed a criminal complaint WITH the U.S. Attorney General's Office (Preet Bharara) back in 2014, you can see that complaint interlinked in this blog here.

The criminal complaint deals with the apparent bribery by New York State Governor Andrew Cuomo of the then-Appellate Division 3rd Department judge Leslie Stein by promoting her (with a large power, prestige and salary/benefits increase to the New York State Court of Appeals) WHILE she was deciding the case against Mr. Neroni by the DEC - and, of course, it took her just 6 days after the  nomination to decide in favor of DEC (subordinate of Governor Cuomo) and against Mr. Neroni, a clear quid-pro-quo.

There is no reason to believe that Mr. Bharara will not pursue Mr. Neroni's complaint, so the anti-filing injunction, and opposition by the U.S. Attorney General's office to Mr. Neroni's appeal to that injunction, interferes with the U.S. Attorney General's own criminal investigation into corruption in New York by opposing, punishing and intimidating their own witness.

But, back to our trio of attorneys from the U.S. Attorney General opposing Mr. Neroni's pro se appeal.

As I stated above, the U.S. Court of Appeals for the 2nd Circuit assigned the U.S. Attorney's Office for the Northern District of New York to represent Judge Suddaby as the Appellee on that appeal.

Here are results of my research as to all three on the websites of New York State and 2nd Circuit court systems. 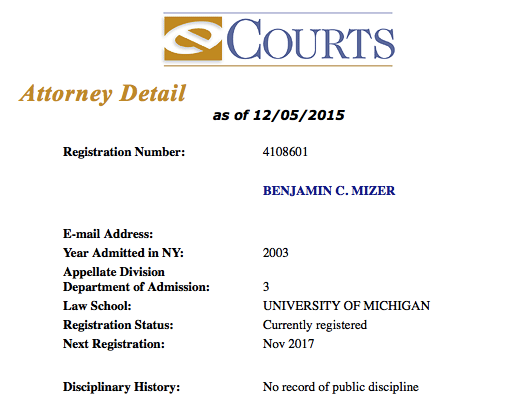 Thus, according to the rules of the U.S. Court of Appeals for the 2nd Circuit, Mr. Mizer had no right to put his signature on briefs, especially as a principal attorney in an appeal, and to file any documents electronically with the 2nd Circuit court.

Yet, Mr. Mizer is part of the office that represents both the NDNY Chief Judge Suddaby, and the 2nd Circuit Court itself, so, I guess, one does not piss of one's own attorney by application of one's pesky rules of admission to one's own counsel.

That is exactly why the New York State Attorney General and his over 600 Assistant Attorneys General escape attorney discipline - because that office represents attorney disciplinary committees in New York in federal actions, defending them against civil rights actions for constitutional violations.

Once again, one does not piss of one's own attorney with the application with that pesky rule of law against him.

So much for the declared purpose of attorney discipline of "protection of consumers".  Right.

So, why Mr. Mizer was even thrown into this litigation if he is not admitted in the 2nd Circuit?  The answer is very simple.

Mr. Mizer, according to his official biography posted on the website of the U.S. Attorney General's office, is a former law clerk of the now-sitting U.S. Supreme Court Justice Paul Stevens.

Nothing like having a familiar name for a U.S. Supreme Justice in the pleadings in the court below for the case that has a potential to go to the U.S. Supreme Court on 1st Amendment grounds.   The name can signal to the justice - "here I am, rule my way", right?

2) The second attorney who signed the Appellee's brief on behalf of Judge Suddaby is Matthew Collette, who is not admitted in New York and who should be on inactive status due to violation of the 2nd Circuit's rule of renewal. 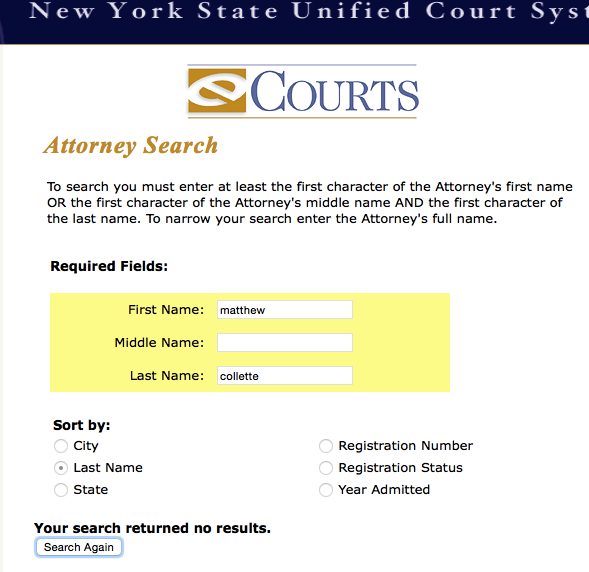 The rule of the U.S. Court of Appeals for the 2nd Circuit, snapshot below, provides that an attorney must renew his admission status every 5 years, and an attorney who failed to renew admission one month after the expiration of the 5-year period (that was September 11, 2015 for Mr. Collette, nearly 3 months ago), is placed in "inactive status" and must complete the renewal process to practice before the court.

Yet, apparently violating that rule, Mr. Collette was not put on "inactive" status and was allowed to make electronic filing as an attorney for the Appellee, and I wonder why the 2nd Circuit violates its own rules in order to allow to practice an attorney from the office that is the official legal advisor BOTH of Judge Suddaby AND of the 2nd Circuit.

As I said above, you do not piss off your own attorney by applying to him your own pesky rules of admission. The rules of law are only for the outsiders, the mere mortals, not for government officials. 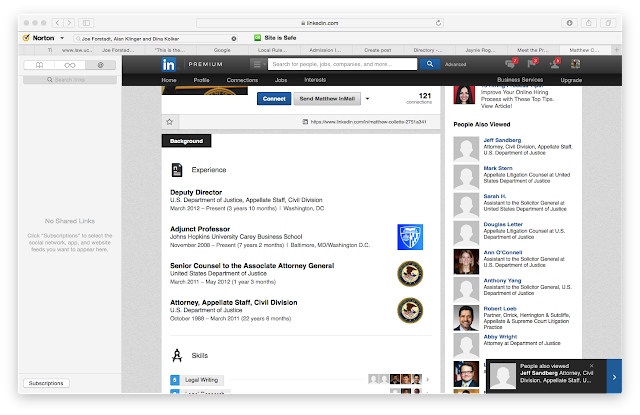 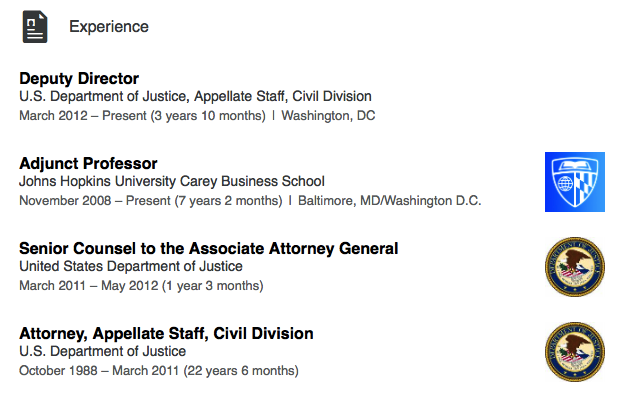 Nobody puts Baby in the corner.

Nobody applies rules made for mere mortals to the current Deputy Director of the U.S. Department of Justice who is making a lightning-fast career to up on top.  Who knows where Mr. Collette will end up next, one does not want to step on his toes now by applying those pesky rules of admission of the 2nd Circuit to him.


3) Jainie Lilley - admitted in the 2nd Circuit (and appears on the bottom of the list of three attorneys, the previous two either not admitted, or should be on an "inactive" status based on the court's rules), but not admitted in the State of New York, so Janie Lilley is not from the U.S. Attorney's Office for the Northern District of New York to which office the case was assigned by the court. 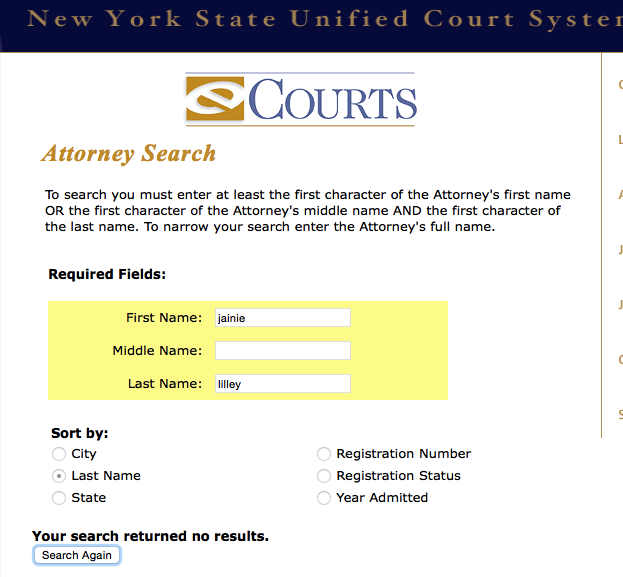 For some inexplicable reason, the U.S. Attorney General's Office had the need to have three names of attorneys put on Judge Suddaby's Appellee's brief in an anti-injunction case on the issue of restriction on future political speech (a presumptively unconstitutional act under existing constitutional law), the first of them being two political heavy-weights (not admitted to that court) and the last is a privileged girl from a rich and powerful family.

Everything about that "trio" is about what today's America is all about - status, connections and money.

The rule of law?  You are kidding me, right?

Posted by Tatiana Neroni at 6:58 AM