A follow up on Otsego County DA John Muehl: rehab, impeachment and/or disbarment?

I recently ran a blog about misconduct of Otsego County (NY) DA John Muehl and posed a question about obvious alcohol abuse by John Muehl that, in my view, jeopardizes constitutional rights of criminal defendants where Muehl is acting as a prosecutor.

After the blog was posted, a reader has sent to me an old archived article from 2003 about Muehl's leaving the scene of a personal injury accident in 1998 that Muehl has caused.

Here it is from the local newspaper The Daily Star, of Oneonta, NY: 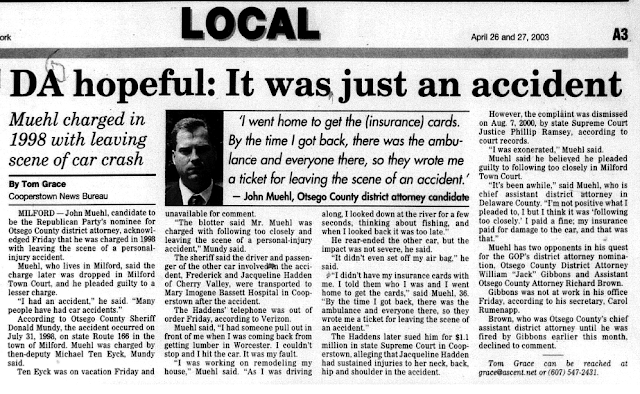 I will go column by column to enlarge the font and make it readable. Naturally, the trooper who stopped Muehl was "unavailable for comment". 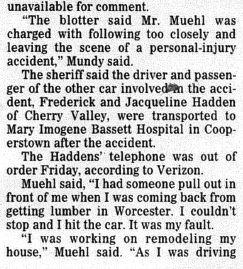 Of course, telephones for the victims of the personal injury accident where Muehl was involved, were also not available for comment, their telephone was, allegedly, out of order, and the reporter could not wait with the publishing until he would talk to both the victims and the trooper who arrived at the scene and issued tickets.

Well, at least Muehl said it was his fault. 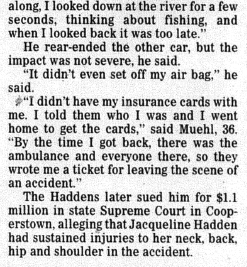 Muehl was "thinking about fishing" when "driving along" and - voila! - hit a car in front of him and caused personal injuries to two people requiring transportation to a large hospital.

Apparently, Muehl (for some interesting reason) was not charged with driving without insurance, even though he did not have insurance card on him at the time of the accident.

Of course, the lawsuit by the victims of the personal injury accident was dismissed by judge Phillip Ramsey who, as far as I know, is yet another incompetent among our judges, at least judging by how he handled a divorce case reported to me, with records, by a person whom I did not represent in that case.

Muehl claimed he was "exonerated", yet, if the case was dismissed without reaching the merits, that does not mean Muehl was actually "exonerated", nor does it mean that Muehl, as a public official, should not have been investigated and prosecuted for lack of fitness for office - and especially so if he duped his voters by not disclosing the fact of his alcohol affliction during his election campaign. 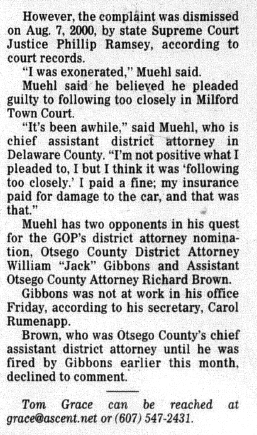 It does not matter that "it's been a while".  Judging by Muehl's erratic behavior in court, his permanently glassy eyes and drunken face color, time only made his alcohol abuse worse, not better, which usually happens when you are in denial that the problem even exist, which is what happens when a person is cloaked with power and that power goes into that person's head, like it is in Muehl's case.

So, once again, shouldn't the accident reports be investigated once again to verify whether attorney Muehl was fit for office in the first place?

I also encourage members of the public to appear in court and witness Muehl's appearance and behavior, which speaks for itsef.

We have a staggering number of wrongful convictions in this country and in the State of New York.  Keeping prosecutors who think of fishing while driving a vehicle on windy mountain roads (likely, because Muehl was in his permanent happy or unhappy alcoholic stupor) will not improve that picture.