I can't afford my scented hanky to deal with the poor!

Russians have a saying:

This blog post is about complaints of New York judiciary (and of attorneys whose livelihood is depending on good graces of that judiciary) to the New York State Commission for Judicial Compensation about the size of the pearls judges can and cannot afford.

DEBRA RASKIN, president of the New York City Bar Association, testimony of all witnesses are quoted from this official transcript of the November 30, 2015 hearing before the NYS Commission for Judicial, Executive and Legislative Compensation:

And, Debra Raskin states that her bar association supported the previous judicial pay raise, too:

Here is the testimony on the same day of BARRY BOHRER, Chairman, Fund for Modern Courts, transcript, pp. 32-33:

Translation into the plain English.

Again, this is the Chairman for the so-called "Fund for MODERN Courts".  Very modern courts, indeed.

What Barry Bohrer omitted to mention is also that he is a licensed attorney, and that for him the judiciary for whose pay raise he is advocating, is his licensing agency holding his own livelihood in their hands: 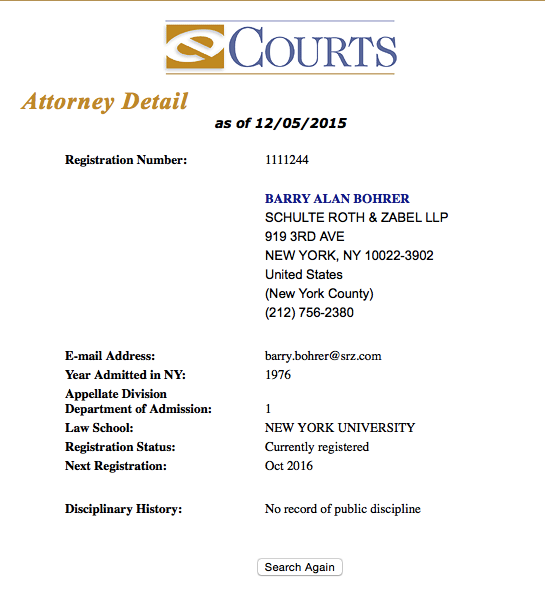 And, this "Fund for Modern Courts"'s officially announced programs is "Supporting Judges", made in affiliation with a now-convicted felon Sheldon Silver.   How appropriate.

Judges could not have a better advocate for judicial pay raises. 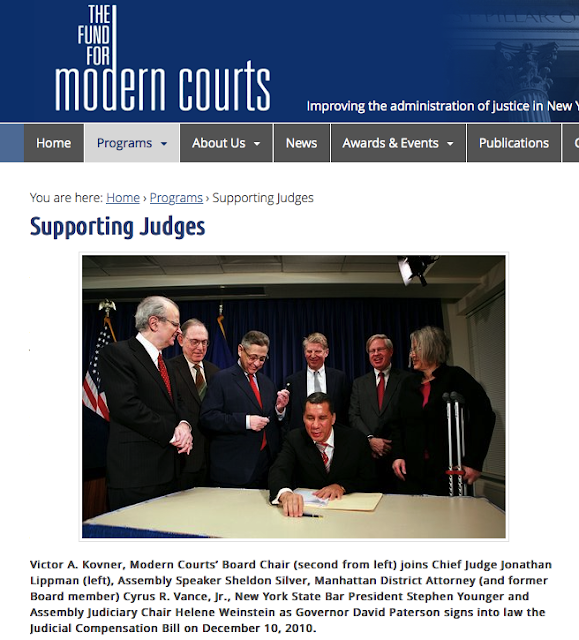 This snapshot as taken of the Modern Courts website TODAY, several days after conviction of Sheldon Silver.

I guess, Sheldon Silver still has some clout that the "Modern Courts" Fund, an advocate for judicial pay raises, considers it appropriate to parade their affiliation with him.

The Modern Courts also supported Lippman's "Constitutional Amendment" to increase judge's mandatory retirement age from 70 (Lippman leaves at the end of this year, this is why the Commission's hearings are so rushed, to make the pay raise Lippman's legacy as a favor of the judiciary he leaves behind and before whom he will appear as a lawyer starting from January 1, 2016). 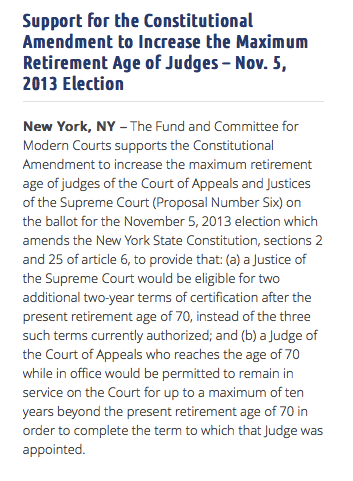 New York taxpayers rejected that amendment at a constitutional referendum of November 3, 2013, as they should reject the undeserved and unwarranted judicial pay raises now.

Remember Barry Bohrer - this is a licensed attorney from a powerful and rich law firm who:

1) depending financially through law licensing on the judiciary, and on favors from the judiciary in resolving his client's cases, and for that reason:
2) he cavorts with the top judge of the state through "civic" organizations like this "Fund for Modern Courts";
3) publicly supports judges through declarations on that organization's website;
4) supports increasing retirement age for judges which saddles New Yorkers with octogenarian judges and would have allowed Chief Judge Lippman 10 more years of more pay; and
4) who keeps the picture of a convicted felon, Judge Lippman's childhood buddy and bosom friend Sheldon Silver, convicted in federal court specifically for corruption in public office, on the webpage of his "civic organization" while indicating support for the state judiciary.

Judges of the State of New York should really be proud of such an advocate.

Barry Bohrer can just as well put a slogan for the New York State judiciary on the website of his organization:

"Judges of the State of New York are not for sale.  We already bought them."

The next courtier with an even more disgusting testimony in support of judicial pay-raise at the hearing of November 30, 2015, was Adrienne Holder, "of Legal Aide Society", an Ivy League law school graduate, transcript starting at p. 49. 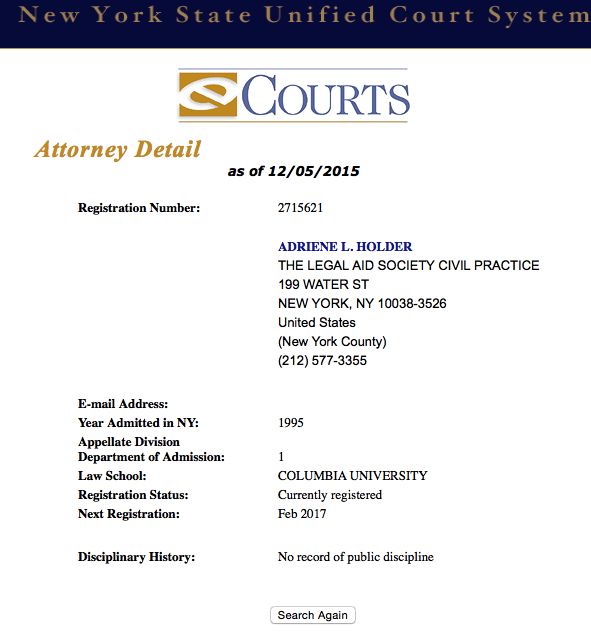 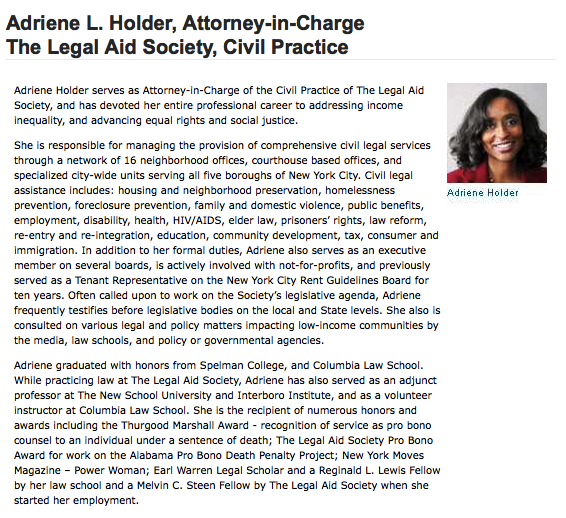 This is the officially declared champion for the poor, who is actually paid to represent the poor in various settings.

Let's see what that champion says on the issue of judicial pay raise.

This is what she says: 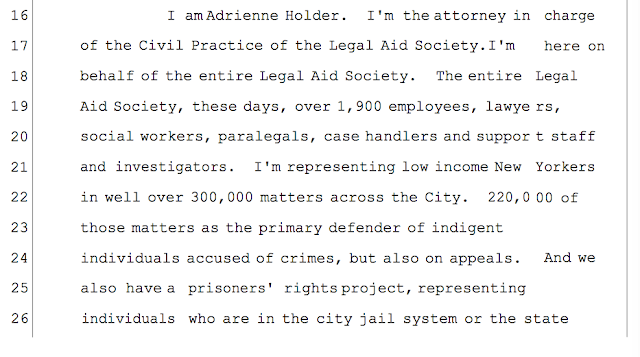 Don't people have SOME shame?  At least not to complain about their "meager bucks" while working with the poor, and asking to increase their pay in order to be able to work with the poor better while this private attorney and half-judge's pay is $20,000 per year more for 1/2 judicial position than what an average New York taxpayer who is going to foot the bill of Turner's pay increase is getting.

I wrote on this blog about another such complainer - Chenango County Supreme Court Justice Kevin Dowd who complained about his "meager bucks" of $174,000 per year right into the face of an indigent pro se litigant", I have a transcript on file, and NYS Commission of Judicial Conduct did not consider that statement an act of misconduct for Judge Dowd.

We read about the nobility in the olden times in the olden countries who would hold a scented handkerchief while dealing with the poor.

This is what our new nobility, the judiciary, and their courtiers the attorneys, seem to be doing.

They are advocating that they need to be paid more because they HAVE TO - DEAL - with THOSE people - the unrepresented parties - THE POOR.  The horror!

Yet, economists say that increased judicial pay may attract not legal talent, but status seekers and "leisure seekers", those people for whom "that vacation in Paris will seem more affordable".
While working with the poor.

In return for their hard work - with the poor.

So, we the taxpayers must now pay extra for HAVING to work with us.

We are that plebs that judges have to be paid extra "to deal with" if we appear before those judges on our own, without an expensive agent thrust upon as as compulsory and expensive "help" from the government in order to represent us.

And we, as that plebs, who is coincidentally the employer of the State judges, should say "no" to the bigger pearls and scented hankies for the judiciary that they need to work with the poor and with all of unrepresented parties, the ordinary people who foot their bills.

They need to earn their pay - and they don't do it even now.