Recently, the U.S. Supreme Court issued a decision, North Carolina Board of Dental Examiners v. Federal Trade Commission where the U.S. Supreme Court declared that occupational licensing and discipline by members of the regulated profession may be in violation of federal antitrust law, without protection of the so-called "state immunity defense".  That was in February, 2015

On October 14, 2015, the FTC issued a press release introducing guidelines explaining how a state regulatory board can still get coverage under the state immunity defense, and what kind of conduct will not be covered.

Conduct NOT covered by the immunity defense, according to FTC guidelines, is:

FTC Guidelines also provided certain examples as to what will NOT constitute an active market supervision, such as:

Now, how does all of this apply to attorney regulation in New York?

NOTHING allows such committees to exist, or conduct investigations or prosecutions of existing attorneys.

As FTC Guidelines provided, active market supervision element of the state will not be met:

1) when the supervising agency itself consists of regulated market participants; and

2) if the supervising agent is State Attorney General, and he or she represents the regulatory board on an ongoing basis.

1) The controlling agency is the New York State Supreme Court, Appellate Divisions.  Appellate Divisions are comprised of judges, all of whom must be market participants, licensed attorneys.  If a judge's license is revoked or suspended, the judge will cease being a judge, so the judge's regulatory supervisory function is conditioned upon approval of the judge's attorney license by the regulatory board that the judge supervises.  Obviously, such a dependency fails the active supervision test.

Appellate Judges in New York are not elected for life, serve only 14-year terms and, if not re-elected, return to their occupation as licensed attorneys unless they resign.  Thus, appellate judges are active market participants for purposes of "active supervision" analysis. 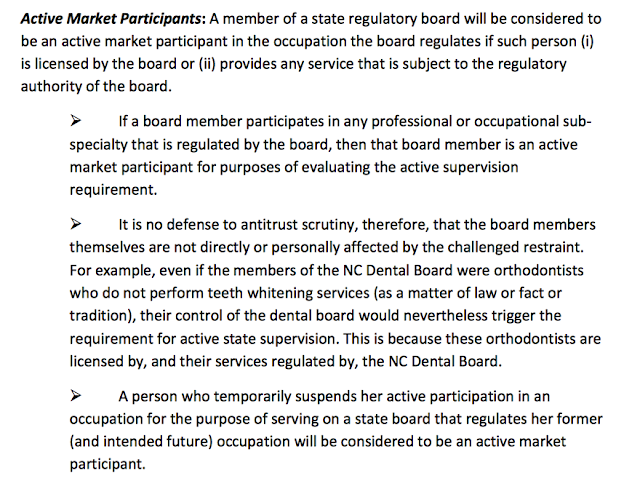 2) New York State Attorney General is not (at least not yet) the public official or agency appointed to supervise attorney disciplinary boards.  If he is, his supervision will fail the "active supervision" test because NYS Attorney General represents regulatory boards in an ongoing way, advising them how to conduct disciplinary proceedings in order to escape liability, and then representing them as an advocate in possible resulting civil rights lawsuits.

NYS AG's position as an advocate of attorney disciplinary board is incompatible with the necessary independent of the supervisor in order to meet the "active supervision" test.

And, finally, since there is a pronounced policy of attorney disciplinary committees in New York to target with discipline only solo, independent, minority, female, immigrant and civil rights attorneys, likely with lower fees and who more willingly and more often work at reduced rates or pro bono, and to whitewash misconduct of politically connected attorneys whose fees are higher, this anti-competitive conduct through attorney disciplinary proceedings may have a substantial impact upon competition in the regulated market.

So, the logical conclusion is that New York State attorney disciplinary/licensing system, as it exists today, operates in violation of federal criminal antitrust laws.
Posted by Tatiana Neroni at 11:48 AM