I wrote on this blog about misconduct of disciplinary attorney Mary Gasparini:

1) that Gasparini advanced, without an investigation or due diligence, fraudulent charges against me that I neglected my clients and should be disciplined for neglect at the time when I was not even admitted to the bar and could not by law be an attorney;

2) that Gasparini submitted to court fabricated court records, and I provided to the court evidence of fabrication;  Gasparini acknowledged under oath authenticity of what evidence in those audio recordings;

3) that Gasparini, in a personal vendetta against me, fabricated criminal charges against me for violation of my own privacy (one does not have a brain to be a disciplinary attorney in the State of New York), and advanced those criminal charges as a prosecutor AND the sole witness for the prosecution, which disqualified Gasparini as of January of 2015 from the disciplinary proceedings, yet, she proceeded anyway - because you do not have a conscience, integrity or morals to be a disciplinary attorney in New York either when courts will cover and rubber-stamp anything you do anyway.

Today I received yet another shining example showing that:

1) Gasp-arini is on a personal all-out course to harass me and avenge exposure of her stupidity, incompetence and complete lack of integrity on this blog; and

2)  that Gasp-arini is trying to spy on me and continue to investigate what I am doing, where I MIGHT be living and what I might be doing next.

Here is the letter that Gasp-arini sent to - guess - The Supreme Court of the State of South Carolina. 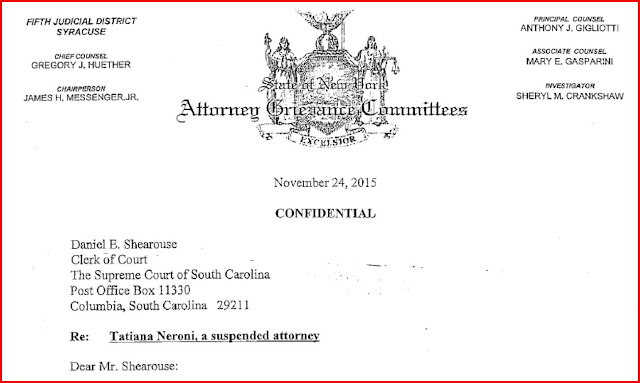 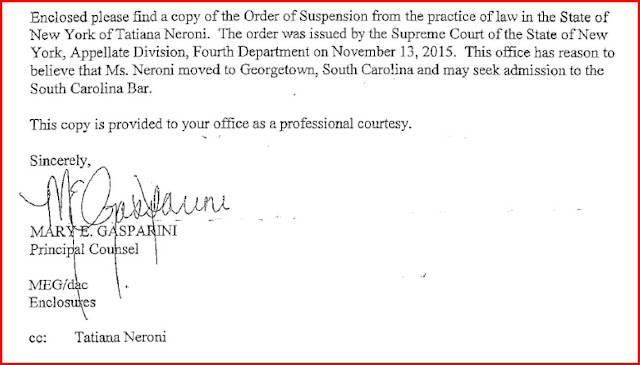 Gasparini did not care enough to serve me with the Notice of Entry of the order of suspension, but she cared very much to notify the state where I am now residing.

In the letter Gasp-arini asserts that "this office" "has reason to believe" that I moved to Georgetown, South Carolina - even though my mailing address is a P.O. Box in Pawleys Island, SC, so Mary Gasparini did not discern the reasons for "their" "beliefs" as to my location, and that I "may seek admission to the South Carolina bar".

This woman automatically assumes, without any grounds, that I will lie on my potential application to South Carolina bar as to whether I was disciplined in other states (which I have to disclose IF I apply - which I have no intention of doing), so she is acting as a well-wisher and forewarns the court of my tainting presence in South Carolina.  She is definitely judging me by her own example, because it is Gasp-arini and not I who was repeatedly defrauding the court (that was happy to be defrauded) by submitting fraudulent disciplinary and criminal charges and cooked court transcripts.

And this fraudster who escaped disciplinary and criminal liability for her fraud because she blocks any investigation and prosecution of herself for attorney discipline, and because of powerful connections that the Committee has with the local criminal authorities, has the audacity to invoke "professional courtesy" in what is in reality a very personal vendetta.

I am sure Gasp-arini as an "associate counsel" of that office did not have authority to pen such letters, or to use taxpayer-paid time to do that, or to use stationary or postage paid for by taxpayers' money to effect her own personal vendetta.

But, this signature as "principal counsel" on the letter head saying that she is only an "associate counsel" is what Gasp-arini is - she is so stupid that she commits fraud without even caring to look how obvious that fraud is, same as how she was acting throughout the disciplinary proceedings.

Many attorneys move after they are disciplined to pursue other life paths and occupations.

It is definitely an irregular procedure for a disciplinary committee to follow an attorney around and, without any suspicion of any unlawful activity,  trying to forewarn local authorities that a suspended attorney has moved into the state.

It is like Gasp-arini considers me on par with a sex offender whose arrival into the area must be announced to the local authorities.

Boy, if that kind of energy would be used to do what she is paid for by New York taxpayers (myself included)...

By the way, I also intend to visit and possibly reside in Russia.

I wonder if Gasp-arini will learn Russian in order to notify Mr. Putin of my possible arrival and tainting presence.  Out of professional courtesy.  Maybe, learning another language will develop her brain somehow - even though I highly doubt it.