As I wrote before that, after a series of TROs imposed by various federal district courts upon the President's Executive Order - without any reasoning or legal analysis - a federal district court in the State of Massachusetts refused to prolong the previously granted temporary restraining order upon President Trump's Executive Order on Immigration, in a well-reasoned decision.

I also wrote that the decision in the 9th Circuit to deny to the President the stay of the TRO imposed by the Washington federal district court, was made by a court, a judge and three law clerks with financial interests in the outcome of the matter, which makes the decision void. 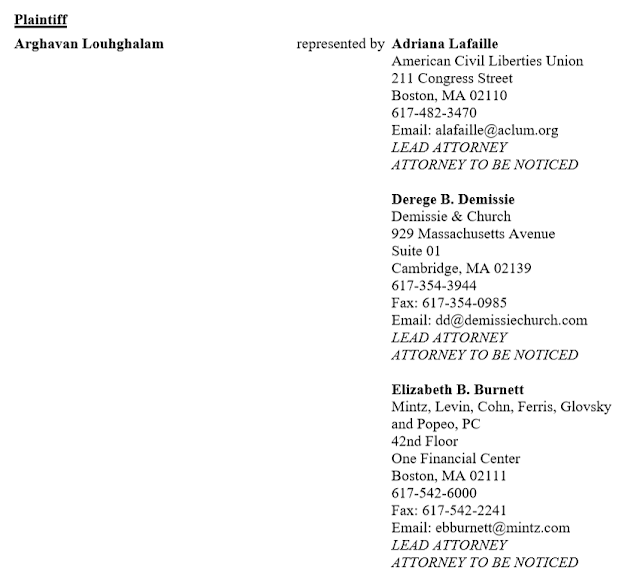 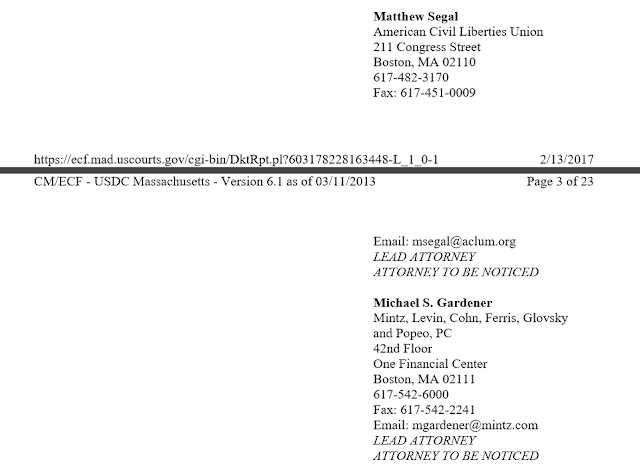 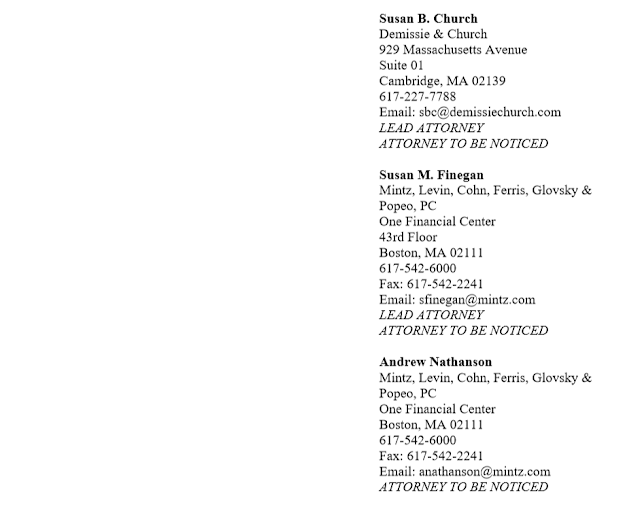 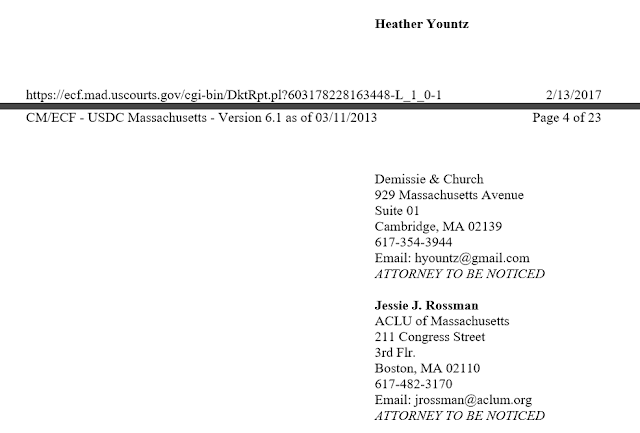 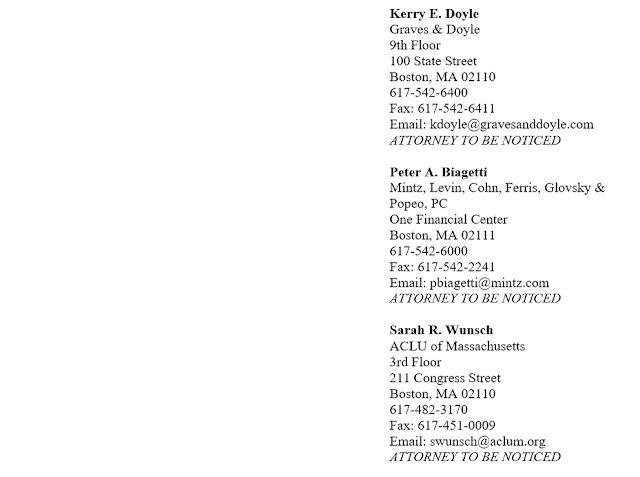 Why 14 attorneys out of 4 large law firms:


have to represent one individual plaintiff is anybody's guess, but all of them, in case of a "victory" will charge billable hours of, likely $400 per hour or more, for their "work".

The same - billing hours and throwing around the clout of each individual attorney - would be the reason why Mintz, Levin, Cohn, Ferris, Globsky and Popeo, PC entrusted to represent each individual plaintiff in this case to its 6 attorneys: 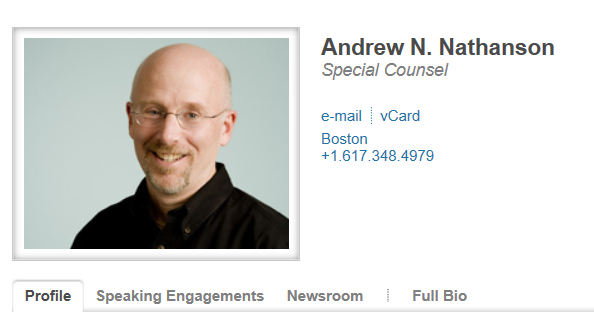 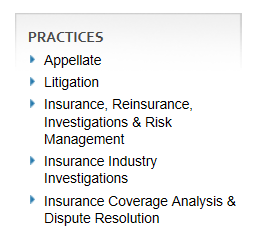 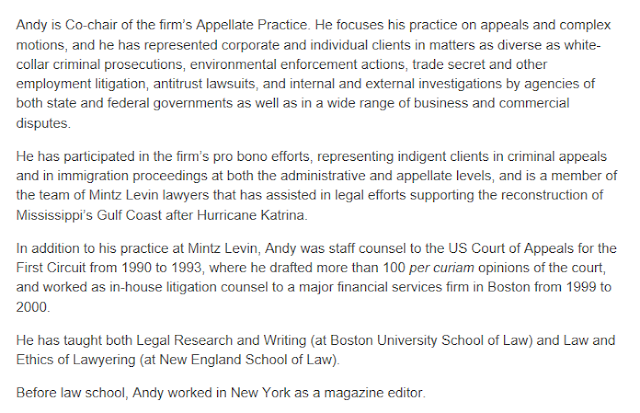 and that does not say much, because often attorneys from other areas of specialization come to represent "pro bono" clients only to get free CLE credits, but provide no value to the pro bono client, or harm the client by their lack of expertise).

Why Mintz etc., Demissie & Church and Graves & Doyle attorneys had to jump into the fray at all, when there were already four ACLU attorneys in the case can be explained, likely, by greed (billable hours and recovery of attorney fees from the U.S. taxpayers under 42 U.S.C. 1988 if attorneys' collective political clout would allow to push this meritless case through the courts), since there was obviously no need for 14 attorneys representing one civil rights case.

After their bitter loss in federal court (where proceedings at this time came to a lull, there were not filings after the order of Judge Gorton denying the TRO), here is what attorney Susan J. Cohen  has to say about the 9th Circuit decision - which, once again, is diametrically opposite to the decision of the judge against Susan J. Cohen's clients, and which unlawfully overrules Judge Gorton, even though it had no territorial jurisdiction to do so, multiple financial disqualifying conflicts of interest, and extremely problematic legal analysis:


So, this decision has wide-ranging implications for due process rights and the future determination, perhaps, by the U.S. Supreme Court, of the rights of individual states and employers in contrast with the right of the President of the United States to control the inflow of immigrants and others into the United States to protect the country.


So, it’s an important decision, because there are many statements in the written decision which support the notion that employers have the right to have vitally important employees and others who are supporting the work of the institution or the company to come into the country and freely travel back and forth to do this important work and not tie their hands and hinder the important work that the United States needs to carry out.

You can view the video statement of attorney Susan J. Cohen here, on the left of the webpage.

It is significant that Susan J. Cohen, an immigration attorney from a large 500-lawyer strong Boston firm representing corporations, including manufacturers, puts a stress in her 1 minute 50 second statement upon the rights of employers for the free flow of immigrant workers in and out of the country, unhindered by the President's immigration policies.

While in the first part of her speech Susan J. Cohen paid lip service to the rights of "foreign nationals, U.S. residents, citizens", that was just one time in her speech that she referred to those rights.

Then - even though she represents in the Massachusetts court 6 individuals and one non-profit corporation that does not employ immigrants - Susan J. Cohen concentrated on the rights of "institutions, states and employers" for the free flow of immigrant workers "and others" "supporting their important work".

In that short speech, while Susan J. Cohen has mentioned individual rights only once, she mentioned the word


So, it is really not about "individual due process rights".

Americans, including unemployed or underemployed Americans, protesting in the streets against President Trump's Executive order on immigration should take notice of this singular focus.

Employers, manufacturers, retailers, large state and private educational institutions, clients of large law firms, are looking to fill their vacancies not with Americans, but with immigrants.

Why?  Because immigrant labor is cheaper, and because immigrants, until they receive citizenship - and a "path for citizenship" may take years - are more pliable to employer who can revoke their "sponsorship" for visa at any time, so immigrant employees are less bothersome and less of a lawsuit risk for harassment, employment discrimination, poor working conditions, low pay etc.

So, this is the most important goal that immigration lawsuits funded by legal elite and, likely, by their corporate clients pursue:

FREE FLOW OF CHEAP FOREIGN LABOR INTO THE COUNTRY.

That's the goal of the main, "rainmaking" (profit-bringing) clients of the legal elite, and the reason for throwing money and effort into such court cases - in addition to the law firm's billable hours for 14 expensive attorneys getting paid for the work of one that the court thinly hinted was frivolous in the first place.

By the way, nothing in the docket report of the case where Susan Cohen appeared indicated that the work is being done pro bono.

My analysis of the court cases where Susan Cohen lost an application for a TRO, and the one upon which she commented, will follow.