#JudgeJamesRobart's "Magic Square", the rule of the crowd, or once again on independence of the judiciary

In the beginning was the Word.

And the word was of judges.

And the judges decided without any reliance on any laws - just because they believed whatever they say was the law, and because they were saying in accord with what was blasting out of TVs and what was chanted by crowds in the streets.

Whatever Trump is doing is bad.

And judges did.  Without any reliance on any rule of law.

And in New York.

And then, in Massachusetts, there was a change of judge from Judge Alisson Burroughs to Judge Nathaniel Gordon, and a change of ruling.

The new assigned judge in the federal court in Massachusetts, Judge Nathaniel Gordon, ruled not based on the red rag with the words "Donald Trump" on it, but based on the law.

Judge Nathaniel Gordon of the U.S. District Court in Massachusetts, the first judge out of a number of judges who were presiding over similar cases so far, analyzed the law, and said in his decision that there was no legal basis to stop Donald Trump, the president of the U.S., to do what he was doing with his Executive Order on immigration, without regard whether crowds in the street liked it or not.

And THAT was independence of the judiciary and a dispassionate decision based on the law.

But, that was not what the crowd wanted.

So, Judge James Robart, out of another federal court, in Seattle, Washington, cancelled what Judge Gordon said and, in a decision that had no analysis that Judge Gordon's decision said, ruled - no, Trump must be stopped, period.  My judicial word is law.

This is the ENTIRE amount of "legal analysis" by Judge Robart, making no analysis of the underlying substantive law whatsoever. 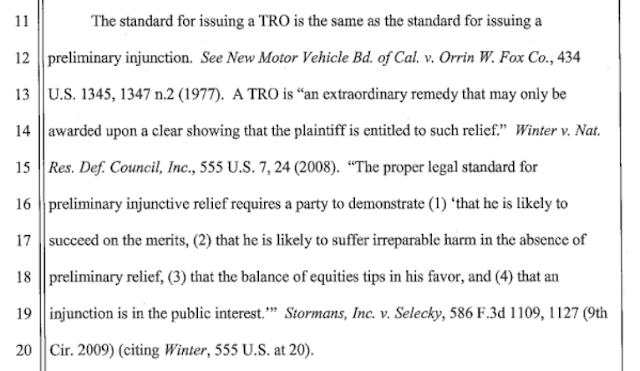 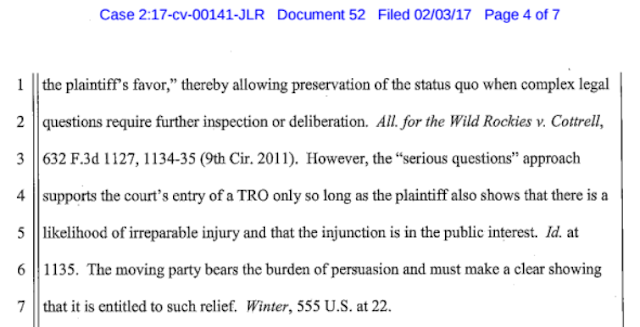 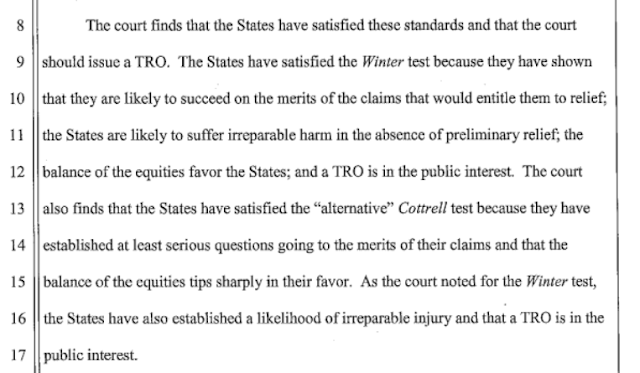 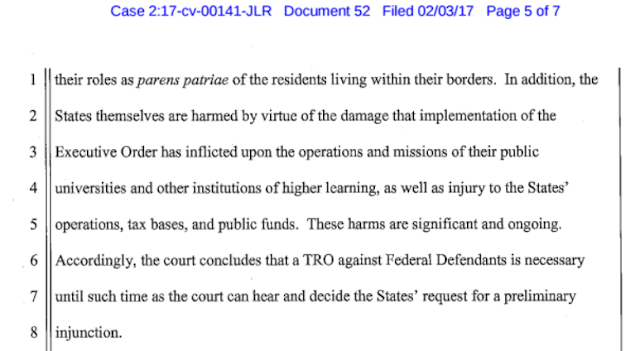 And this is what Judge Robart ordered: 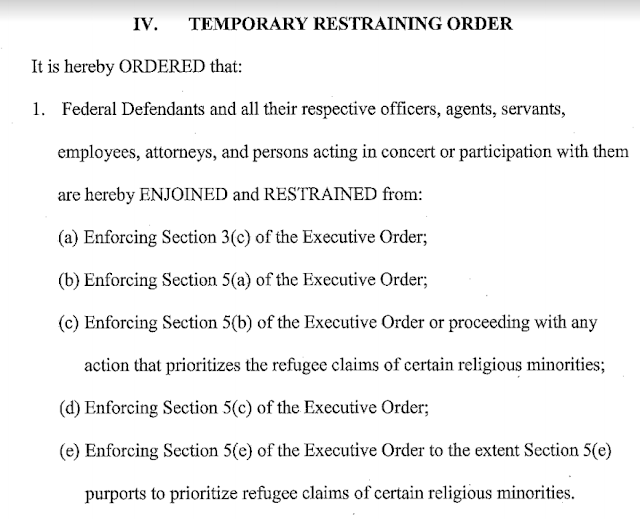 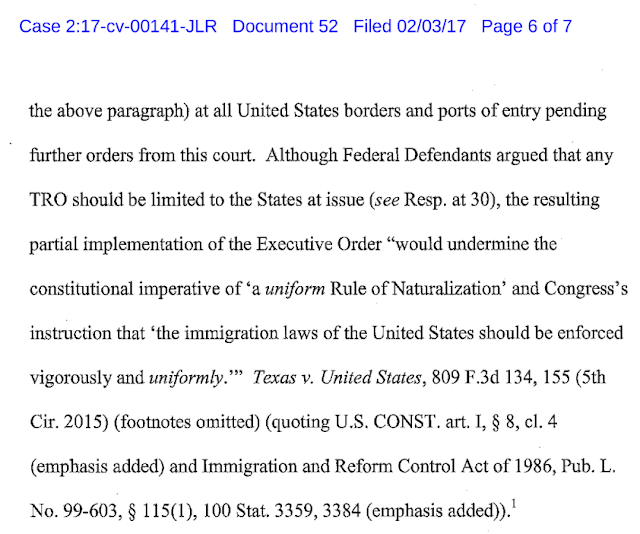 Of course, what judge Robart did, ruling that his order has nationwide application, was illegal and the best way to describe, why, is to draw a square, let's call it "Judge Robart's Magic Square". 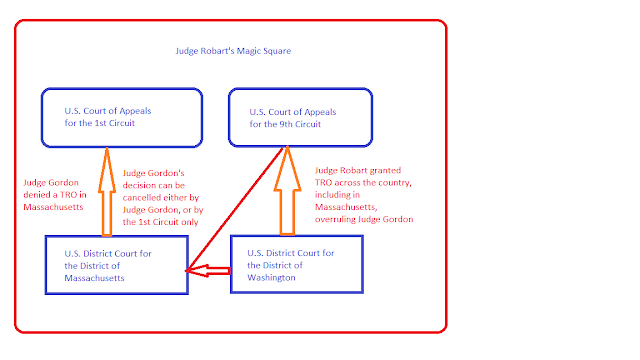 Not only Judge Robart forgot about such trifles as "standing to sue" or elementary explanation why he things that plaintiffs have a chance of "prevailing on the merits" when:

1) they have no standing, and even if they had, then,
2) as Judge Gordon ruled in his decision, the applicable test for resolving the problem will be the "rational basis test", which plaintiffs will fail (resulting in dismissal of the lawsuit, possibly with sanctions and attorney fees against those who filed it).

Judge Robart, in his chase of the red rag with Donald Trump on it and in his zeal to appeal to the crowds in the street and in the media, did not even care to consider that, as the "Magic Square" of jurisdictions about shows, Judge Robart was never:

to preside over cases in federal court in Massachusetts, or in the 1st Circuit, and for that reason, he could not possibly have the power to cancel the decision of Judge Gordon in Massachusetts, which he did, spreading his decision to "all the country", without exceptions for Massachusetts.

So, thanks to Judge Robart's extraordinary preference of a place in the limelight to the rule of law, there is now a mess - at least in the state of Massachusetts, where AT THE SAME TIME, there are two judicial orders, from two judges, applicable to the situation - Judge Gordon's, denying TRO to plaintiffs and allowing President Trump's Executive Order to be applied within the State of Massachusetts, and Judge Robart's, out of Washington, illegally cancelling Judge Gordon's decision and imposing the TRO, without any explanation, legal analysis or legal basis.

President Trump filed a notice of appeal of Judge Robart's decision, and, while the appeal was being prepared, filed an emergency motion to stay Judge Robart's TRO, correctly stating that Judge Robart hugely overstepped his authority in second-guessing discretionary decisions of the U.S. President on national security issues, ruling in favor of parties without standing, and, among other things, had no authority whatsoever to overrule Judge Gordon, whose decision was first-in-time before Judge Robart's.

Under the circumstances, the 9th Circuit had not choice but to agree with President Trump - if the rule of law was to be applied.  After all - see the Magic Square above - the 9th Circuit also had no power to overrule Judge Gordon's decision.

But, the 9th Circuit so far denied President Trump's emergency motion for a stay.

So, the case will have to be ultimately decided by the U.S. Supreme Court.

But those who want to say once again that President Trump has to somehow respect the judge who did THAT (see above), only because crowds in the street and in the media chanted loud enough - and do that by breaking every rule in the book and by not even QUOTING the law he relied upon - should go back and read the definition of what the rule of law is.

It is the rule of WRITTEN law, actually, and the written law is what the People's representatives put into law, and it is not for the judge to MAKE the law.

Judge's word is NOT the law if it does not FOLLOW the law.

And, "independence" of the judiciary does not mean independence FROM the law.