No, I am not joking.

This was offered "on a personal note", as a qualification of a judicial candidate Porter Kirkwood for the position of a Family Court judge - as opposed to Judge Gary Rosa's statement in his election campaign that he is always "on-call" as a judge for criminal arraignments and orders of protection. 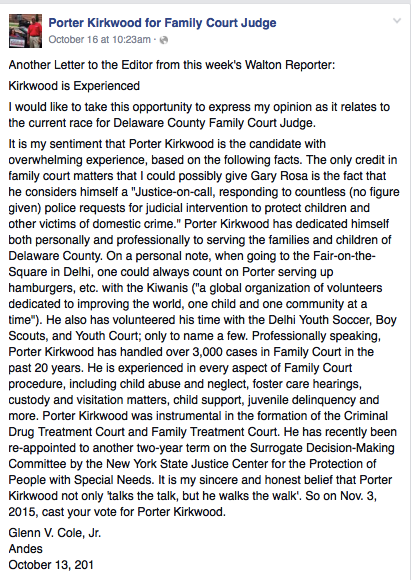 It is not only that Porter Kirkwood is a perfect hamburger server 4 days a year during Fair-on-the-Square in Delhi (happens every Friday in July), he also volunteered in DelYouth Soccer (where his son was), Boy Scouts (where his son was) and Youth Court (again, in the school where his son is).

Wow - what a public service, to participate in extra curricular activities of your own child.

Moreover, Glenn V. Cole Jr. is not an attorney: 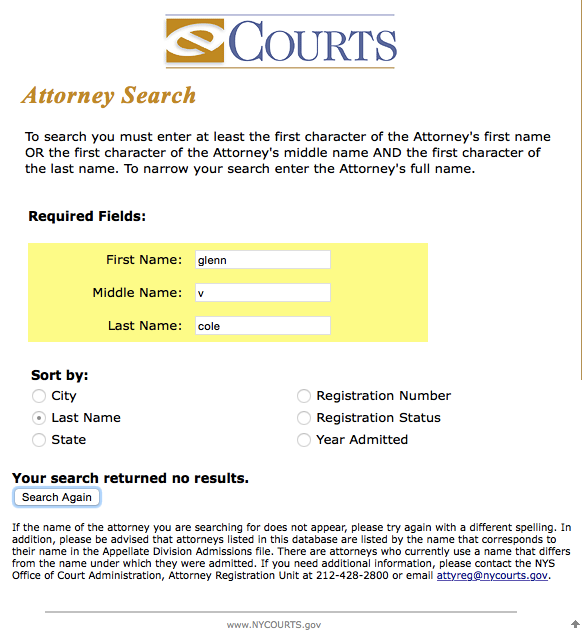 has no verifiable legal training and certainly cannot pronounce a "professional opinion" as to how good Porter Kirkwood is as an attorney.

I am an attorney, I do have a legal training, I participated in cases where Kirkwood appeared - both in Family Court and in federal court - and I can attest that Kirkwood lacks basic competence and ethics.

How Kirkwood was "instrumental" in forming Drug Treatment Court and Family Court is also (1) unverifiable, since information about that court is not public, and (2) raises all kinds of conflict-of-interest and ex-parte-communication issues, because the alleged "creator" of Drug Court in Delaware County (who was re-elected in 2012 on the same fairy tale), Carl Becker, presided over child neglect proceedings while communicating with Porter Kirkwood in "creating Family Treatment Court" and "Drug Treatment Court" - and that is in addition to their ex parte communications behind the courthouse that were visible, and those likely ex partes by phone and in person that were not visible or verifiable.

Mr. Cole also indicated that Porter Kirkwood was allegedly recently appointed to the Surrogate Decision-Making Committee by the New York State Justice Center for Protection of People with Special Needs.

Sounds wonderful and honorable.  Right?  Let's look into what the alleged Committee does and how what the Committee does fits with what Porter Kirkwood does in his public employment and private practice.

Here is what the Committee does:

Even though SDMC claims legal support in a 2012 New York Legislation, the powers of the Committees and their functioning is clearly unconstitutional, since they sit in "panels" in substitution of courts and have authority to make, on behalf of incompetent individuals, major decisions involving major treatment and even end of life.

There can be no constitutional basis for medical and especially end-of-life decisions to be made, for an incompetent individual, without a court-appointed legal guardian and outside of court procedure.

It is no wonder that this program is "unique" for New York only - no other states authorized such an extraordinary setup that can be potentially used for elder cleansing and cleansing of people with disabilities - outside of the court system, with not judges, but "panels of volunteers" deciding issues of people's major treatment and even lives.

For Porter Kirkwood to wield such a power is especially horrible, since Porter Kirkwood, while being a social services attorney for Delaware County,  recently represented, for money and during taxpayer-backed county time, defendants in a civil action accused of elder abuse and wrongful death of an elder.

Moreover, Porter Kirkwood is the last person who should be appointed to such a panel, since he tried to have concocted a mental health diagnosis of a child, by a hired expert who never saw the child, in order to label the child and thus diminish the child's credibility against Porter Kirkwood's own son in a potential court proceeding.

It is interesting that Kirkwood was appointed to this particular "death squad" panel when Delaware County Surrogate's Court was litigating the shenanigans of his clients, a social worker and the ex-Commissioner of Social Services, who self-dealt specifically with an end-of-life patient, a 89 old lady, and played with her will.

One thing I can say about Kirkwood - while Judge Gary Rosa "simply" serves the public straight as a 24-7 on-call judge, Kirkwood is engaging in "projects", one shadier than the other.

Good grief - end of life decisions, out of court, by Porter Kirkwood as a member of a "panel".  Gives me creeps.