Corruption in magistrate appointments and interactions with the courts. NDNY-FCBA and other attorney-sponsored organizations - the tails that wag the court: a federal probe of this affiliation between the court and a private interest group is overdue


Appointment of federal magistrates is governed by 28 U.S.C. 631, which provides for "merit selection panels" by "district residents".

"District residents" are turned by many courts into practitioners practicing in that court, even though attorneys admitted to practice in a particular district do not have to reside in that district, and thus, their "service" on the "merits panel" may not be appropriate.

Yet, in the U.S. District Court, merit selection panels, instead of being composed of "district residents", which is a strict requirement of 28 U.S.C. 631, are composed of "attorneys and other members of the community",

Moreover, when attorneys who are practicing before the court select magistrates presiding over their cases, that raises unique conflict of interest issues.

When an attorney gave the magistrate a gift of $1,480,096 (salary of $182,500 over an 8-year term), and that's without benefits and pension, a magistrate may feel indebted to rule that attorney's (and his client's and his firm's) way, and MANY issues in federal litigation are decided by magistrates, whether you agree to that or not.  I never agree, as part of the General Order in civil rights cases at the beginning of a civil rights case, for a magistrate to decided issues in my litigation, and magistrates still handle discovery issues anyway, no matter what I say and no matter what the law says.

Here is the official judicial biography of magistrate David Peebles: 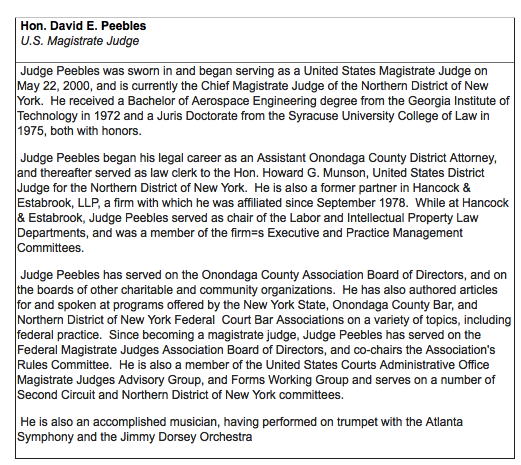 Magistrate Peebles also "serves" as an officer of American Inns of Court - Intellectual Property Chapter in Albany, NY, where his organization intermittently shows and hides his status as an officer depending on whether Judge Peebles is sued for his participation in the organization or not.

Other officers of the organization are members of Hiscock & Barclays, LLP, now Barclay Damon.

Partners from HB were on the merit selection committee appointing magistrates, and likely, appointing, Judge Peebles, too.

Partners from HB are also members of the "Local Rules" committee of the same court.

So, partners from HB (now Barclay Damon) have their finger in every pie:

At this time, Barclay Damon and Judge Peeble's former law firm Hancock & Eastabrook are "coincidentally" both on the court's "Standing Committee": 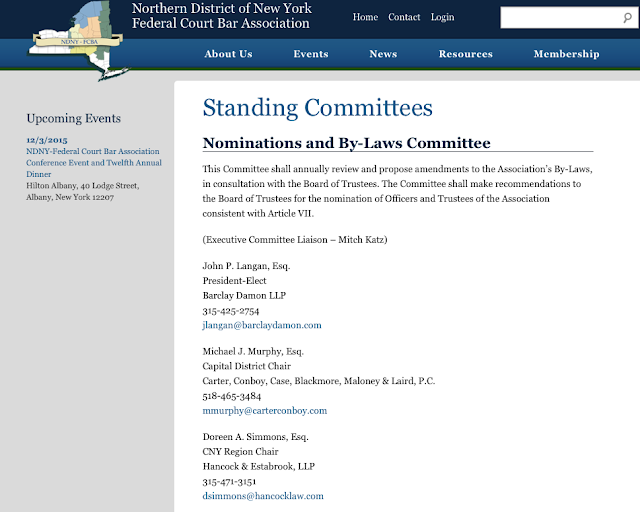 The recently sued by my husband in that particular court law firm Hinman, Howard and Kattel are actually advisors of the court: 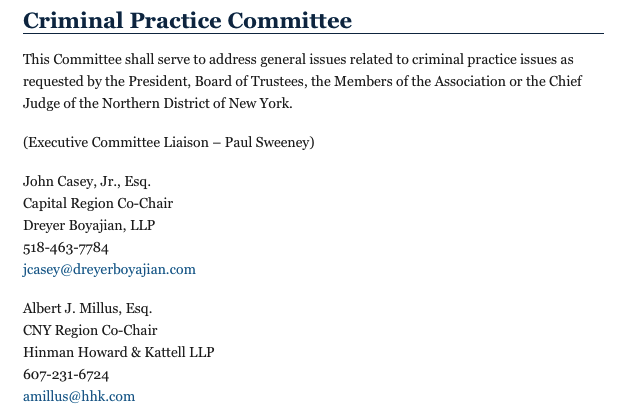 same as the son of the recently sued John Casey, member of the disciplinary committee who disbarred my husband while accepting a bribe of private representation from two powerful attorneys, retired judge Robert Harlem and his son Richard Harlem, at the time when he was asked by my husband as a complainant to investigate them.

I sued John Casey in Neroni v Peebles recently, and Peebles was actually assigned to the case where he was a defendant, and then the case was tossed, even though the Casey family and its various law firms were part of the fabric of the NDNY court.

Barclay Damon continues to be part of the Standing Committee on Local Rules of practice: 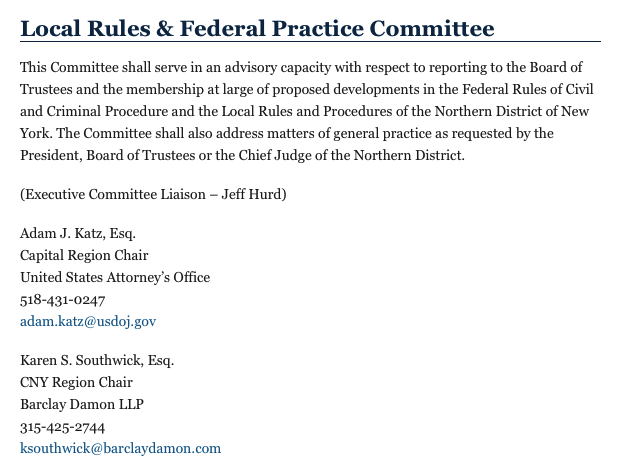 as well as of the "Pro Bono Committee": 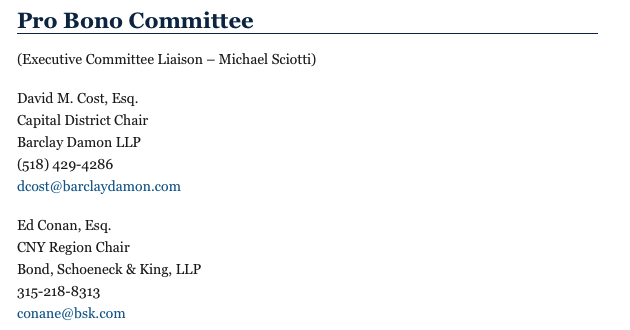 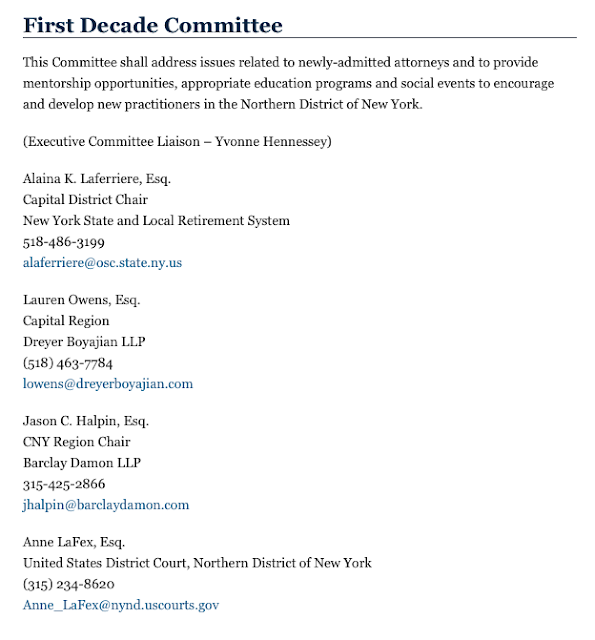 Nothing like attorneys for your opponents, or attorneys you are suing sitting on various committees of the presiding court, including on committees including employees of the court and having ample opportunities to discuss your case and form the court's opinion against you.

And, while I continue to litigate Neroni v Zayas case, where my husband challenges constitutionality of the entire system of attorney regulation in New York, and where former disciplinary attorney Steven Zayas (who resigned amid investigation into filing false time sheets) is a defendant sued for money damages, his current employer: 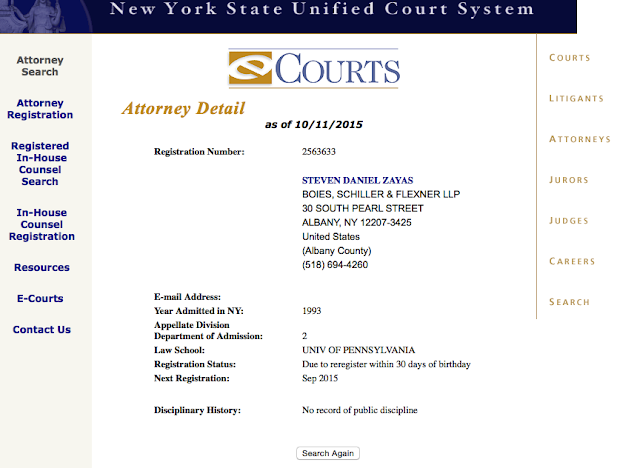 is part of the court's federal bar's "Public relations and membership committee": 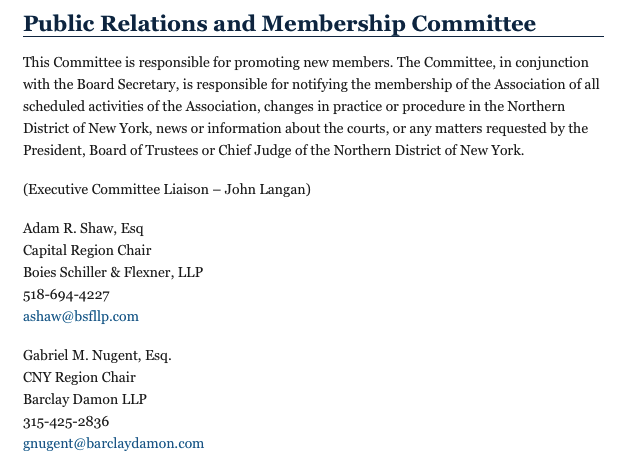 Nothing like just a little appearance of impropriety here.

And - as an example of "wisdom" of choices of attorneys for these merit selection panels, here is the "merit panel" for the selection of a magistrate judge in 2014: 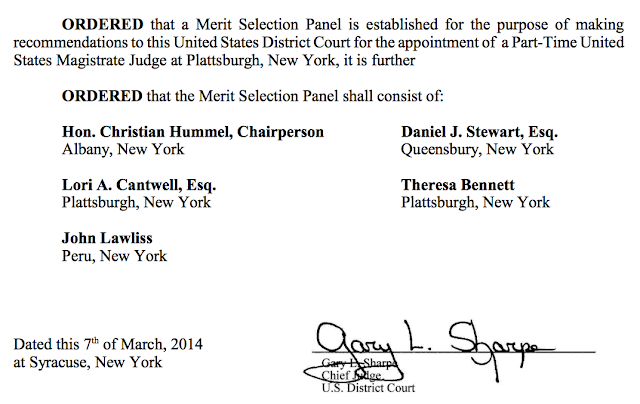 As of March 7, 2014 Judge Sharpe considered Lori Cantwell as a worthy individual to serve on a magistrate selection panel.

At the same time, Lori Cantwell practiced before the same court, and there is no indication whether she is the "resident of the district", as required by 28 U.S.C. 631, nor does the order indicates whether she is.

Moreover, Lori Cantwell, as of June of 2013, was sued by the Plattsburgh Housing Authority for:

“breach of fiduciary duty; rescission (the right to have a contract set aside if it has been entered into mistakenly); fraud and deceit; breach of contract and unjust enrichment.”

Instead of being investigated and, possibly, criminally prosecuted, Cantwell was put on a "merit selecting panel" and was charged with a duty to select magistrates for a huge federal district court.


Another member of the "merit selection panel" was attorney Daniel Stewart of Queensbury, NY.

Apparently, his "merit selection" was so successful that he himself was "selected" in the following year as a magistrate for the same court - a perfect reward of nearly $1.5 million over 8 years in salary alone (out of taxpayers'  pockets, of course) for the "right" selection decision.

Stewart claims he "did not expect" that he will win and claimed he won in a "competitive process" where he was "chosen" by a "merit panel" out of 90 applicants.

Too many coincidences for a "merits" win.

Looks like Stewart got as an insider ON that "merit selection panel" and got something out of "serving" on that panel.

Stewart inherits the magistrateship from Magistrate Treece who, thankfully, will not seek a second term as a magistrate - I will never forget his decision that failure to give pain medication for a week to a prisoner with a bone fracture was NOT a constitutional violation.

The NDNY court never discloses their conflicts of interest in the cases I or my husband litigated in front of that court, so I made it a part of my public service to the people and my duty of an officer of the court to make these conflicts of interests known to the public, right after I found about them.

NDNY-FCBA, Inc., a corporation, announces, as a benefit for its members, the following:

Of course, the benefit in itself is not an opportunity to "serve", but an opportunity to be close to the judicial ear, to be able to communicate with the judge or the judge's personnel, through those "committees" and to influence the court through behind-the-scenes ex parte communications, and through "recommendations to the Board of Judges regarding court policies and procedures".

I just think that, same as the U.S. Attorney General is investigating Connecticut State judiciary's affiliation with Association of Family and Conciliation Courts through a corruption probe, a similar probe should be launched as to activities of NDNY-FCBA, 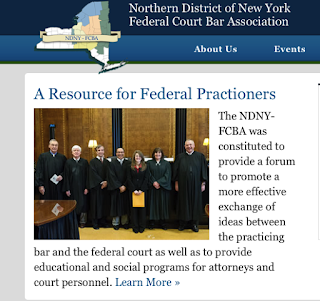 a "resource" where judicial personnel "serves" along with litigants, witnesses in litigation and attorneys appearing before the court on various "committees" that make the court not a public entity, but a tool of private interests.

Posted by Tatiana Neroni at 9:49 PM