While the headline, and the statements below, read like sick jokes, those are statements in Porter Kirkwood's election campaign:

I am very much interested to know how Porter Kirkwood "works hard" for me.

1) that Kirkwood “came here less than 20 years ago to work for the commissioner of social services”;
2) that Kirkwood “has no ties that bind him to Delaware County other than a good-paying job at taxpayer expense.  I predict that when he no longer has a good job at taxpayer expense, he will no longer be in Delaware County because other than a job he has no stake in Delaware County”;
3) “The fact is, each and every time [Kirkwood] appeared in family court it was to represent the commissioner of social services. Regardless of how many times he has been in family court, it has always been on behalf of the same client,” he said. “In contrast, my trips to family court have been on behalf of people – Delaware County families";
4)"When my opponent gratuitously says he has saved your taxpayer dollars, ask him how. How do no-bid contracts save taxpayer dollars?”
5) Gary Rosa also mentioned, back in June 2015, that Porter Kirkwood asked for a $40,000 raise from his salary of $93,000 when he became Delaware County Attorney.

Porter Kirkwood answered that criticism, and specifically the part that one of his first steps on the job is to lobby for a steep salary increase for himself.

In his criticism in June of 2015, Gary Rosa used old information about Porter Kirkwood and claimed his salary was, as reported by seehthroughny.net in 2013, $114, 917.

While confirming Gary Rosa's numbers from seethroughny.net, Porter Kirkwood did not disclose that his salary, since January of 2015, was actually $125,917.

Not disclosing his brand new salary hike in response to Gary Rosa's criticism was omission amounting to representation - and fraud upon voters.

Porter Kirkwood claimed that his salary hike was justified, because he should get as much as the District Attorney, yet, he allows an outside law firm to handle litigation for the county.

The District Attorney - as much as I criticized him for his misconduct which, I firmly believe, makes him unfit to be a judge or a lawyer - is actively litigating in court in front of juries, while Porter Kirkwood's only "advantage" was litigating in front of his former boss and colleague and current friend Becker and getting the cases of Delaware County Social Services fixed this way between two attorneys for social services - one present and one former, who was on the bench.  Not much honor, experience or competence is needed for such shady dealings - only a lack of integrity.

It does not take much brain, ladies and gentlemen, to get a case fixed from a judge who works not as a judge, but as a second counsel for social services in child neglect proceedings - as Becker did for years.  All it takes is just the lack of integrity, and Porter Kirkwood has enough of that "quality".

As to Kirkwood's competence, I know of a case that Porter Kirkwood lost at trial with nobody appearing against him - a statement of complete incompetence.

In two recent cases that I handled in federal court, in one of them, Porter Kirkwood filed a notice of appearance without indicating who is his client, on whose behalf he is appearing - a statement of complete incompetence.

In another, Porter Kirkwood represented a County official as long as he was able not to file his own motions and responses to motions, but support other people's motions.  As soon as his serious input was needed, an outside law firm was hired.

Let's also note what kind of cases Porter Kirkwood handles in order for him to claim that he has been "working hard" for "hard-working families" in Delaware County, and that, as a judge, he will continue doing it.

People who provide financial support to Porter Kirkwood are either government officials, or rich landowners and professionals like accountants and real estate brokers.

They are NOT appearing in Family Court cases.

The spread of supporters for Kirkwood is here: 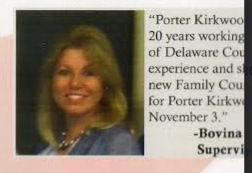 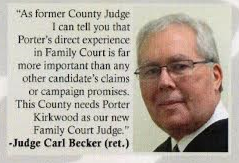 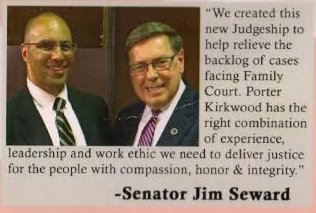 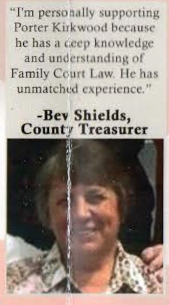 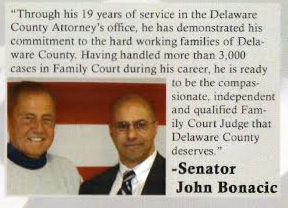 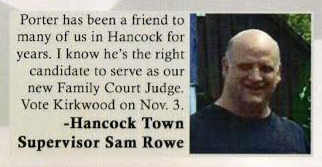 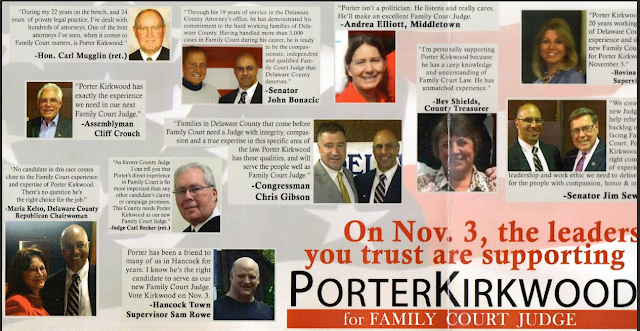 The "leaders you trust" include:

And - by the way - it is a mystery to me how the 3 senators, NONE OF WHOM reside in Delaware County can support Porter Kirkwood with their votes on November 3, 2015 - that is one more fraud upon the voters.  I wonder if these senators know how their names are used by Kirkwood.  If they do, they are participants in voter fraud.


And, dear voters, please, pay attention to the fact that NONE of these endorsers will EVER be litigating in front of Kirkwood in Family Court.


Their interests lay in a completely different territory - Supreme Court, where Kirkwood will be fixing cases for rich parties, providing return on investment for support in election by providing the "right" decisions and sanctioning the enemies of supporters, their families, friends and political connections.

So, the leaders you, dear voters, allegedly trust, include people like Becker - who split "hard working families" for 27 years through social services, and then fixed cases for the same social services, and for his friends and former colleagues since 2002 when he came to the bench.

The "leaders who you trust", dear voters, are the town supervisors who participated in the sweet deal of awarding millions of dollars in YOUR money to unknown individuals bypassing public bidding - and Delaware County still resists my FOIL request to provide copies of those contracts.

The "leaders who you trust", dear voters, is Beverly Shields who makes "final determinations" on public contracts that bypass public bidding - according to her own statement in support of Porter Kirkwood, endorsed by Porter Kirkwood by placing it on his Facebook campaign page.

The "leaders who you trust" are those who, for years, used your hard-earned money exacted out of you in taxes, under the threat of foreclosure on your homes to defraud you and self-deal for themselves, their friends and relatives using YOUR money.

Becker was the one who would endorse County foreclosures on your homes if you do not pay taxes to support these fraudsters.   Now Becker is gone, but the County needs "its own person" on the bench, so Kirkwood is now up for sale.

“I don’t know about you, but there’s nothing that disgusts me more than a government official trying to insult my intelligence,” Rosa said. “It’s exactly this kind of arrogance we can no longer accept.”

Posted by Tatiana Neroni at 9:44 AM